Built for Walter and Leonore ("Lee") Annenberg and completed in 1966, the Annenberg Estate in Rancho Mirage, California near Palm Desert in the Coachella Valley is known as Sunnylands. 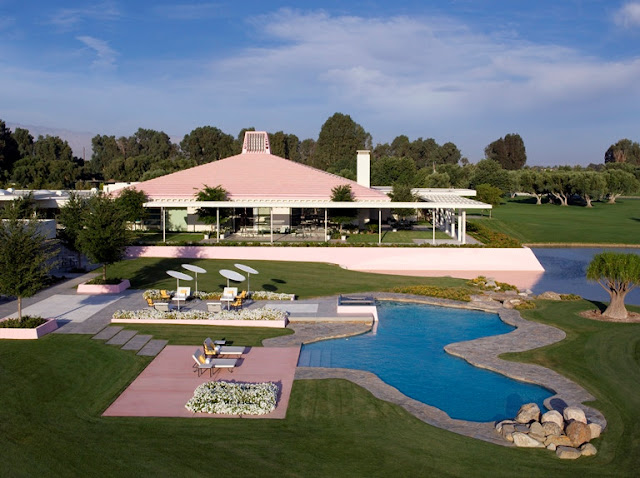 Walter Annenberg (1908 - 2002) was a publisher (he owned and operated Triangle Publications), philanthropist, and diplomat. Upon his father's death, Walter took over the family's failing and scandal-ridden publishing business, turning it around and buying the Philadelphia Inquirer newspaper. He also created the lucrative magazines TV Guide and Seventeen. But he had a civic-minded side as well and he became one of the founding trustees of Eisenhower Fellowships. Richard Nixon appointed him Ambassador to the Court of St James's in the UK. Walter became close friends with Queen Elizabeth II and other members of the Royal family and was eventually made an honorary Knight Commander of the Order of the British Empire (KBE) in 1976. Lee became known and admired for her entertaining and support of patriotic British causes, such as the restoration of St. Paul's Cathedral in London and the renovation of Winfield House, the American ambassador's residence.

The liberal-minded Annenberg's were known for their philanthropy, too. Walter founded the journalism school at USC and the Annenberg School for Communication at the University of Pennsylvania. In 1990, he donated $50 million to the United Negro College Fund. In 1991, he gave $60 million to the Corporation for Public Broadcasting to support student math and science programming. A $2 million Annenberg gift endowed a new Pennsylvania Hospital institute devoted to hip replacement surgery, and named it after physician Richard H. Rothman, who had performed such surgery on Annenberg himself. In 1993, he attended a White House ceremony at which President Clinton announced the ambassador’s $500 million matching-grant program that ultimately funded 2,400 public schools serving more than 1.5 million students. And in 2001 he gave the Philadelphia Museum of Art $20 million, its largest gift ever, and a total of $29 million went to the Philadelphia Orchestra, much of it to renovate the aging Academy of Music building. With Annenberg funds the Philadelphia Zoo acquired a new baby elephant. If only the people of extreme wealth today supported society and education and our culture at large...

Needless to say, the Annenberg's had amassed quite a fortune in their lives and built their winter residence near Palm Springs, enlisting an A List of names in architecture and interior design: modernist architect A. Quincy Jones designed the estate and main house with its distinctive pink roof (Lee wanted it pink to match the pink glow of sunrise and sunset reflecting off the nearby San Jacinto Mountains) while Billy Haines and Ted Graber (whom we just learned of here) did the interiors.

Lee and Walter also amassed a staggering art collection with original major works by Corot, Picasso, Van Gogh, Cézanne, Seurat, Braque, Monet, Degas, Renoir, Gauguin, Lautrec, and Matisse. They donated a majority of their collection to the Met in New York which now houses the Walter H. and Leonore Annenberg Collection. The pieces on the walls now at Sunnylands are excellent quality digital copies produced by the Met itself as the originals are at the museum in Manhattan.

While the house is important in the scheme of architecture and interior history, and is certainly famous for who owned it and who visited, the modernist structure is curiously at odds with its 1940s pastels and staid furnishings. While Billy Haines created some original pieces for the house such as the dining room tables and chairs, and used his signature pieces in other areas of the house, the house does not hang together when considering its envelope. I wonder if it's possible the house was ahead of its time and the furnishings had yet to catch up.


Because of his political relationships and time spent as Ambassador, Walter and Lee Annenberg had influential friends, many of whom visited Sunnylands over the years. In addition to the impressive roster of Presidents, heads of state, and royalty, regular visitors included Frank Sinatra (who was married there), Bob Hope, Fred Astaire, Gregory Peck, Ginger Rogers, Bing Crosby, Truman Capote, Mary Martin, Jimmy Stewart, and Sammy Davis, Jr. It seems only fitting that the property is at the intersection of Frank Sinatra and Bob Hope Drives.


You can visit Sunnylands! While there is an Open Air Experience and a Bird Tour, the Historic House Tour is the only one that takes guests into the house. It is 90 minutes and costs $48 per person. Tickets must be purchased in advance and are available only online. Access to the historic house is only by guided tour. The nearby Sunnylands Visit Center & Gardens is open to the public Thursday through Sunday, 8:30 am to 4:00 pm. There is no fee and reservations are not required. Visitors to the Center & Gardens enjoy sculpture from the Sunnylands Collection as well as a rotating exhibition. There is a film and other offerings about the history of Sunnylands and its founders, Walter and Leonore Annenberg. The Cafe offers light lunch items and unparalleled mountain and garden views.