Since we have spent the last many installations of our ongoing History of Furniture series in the past, let's spend a bit of time in the 21st century. Now, arguably, something that is from our immediate time period might not be part of history as time moves on, but the Abyss table by Swiss-born and Paris-based designer Mattia Bonetti is part of a long line of furniture that is also rightfully considered a sculpture or a piece of art (see my previous post about the Lalanne sheep here, and see the work of the late Wendell Castle whom we will visit in a future installment).

Bonetti starts all of his pieces completely conceptually, with a colored pencil sketch. 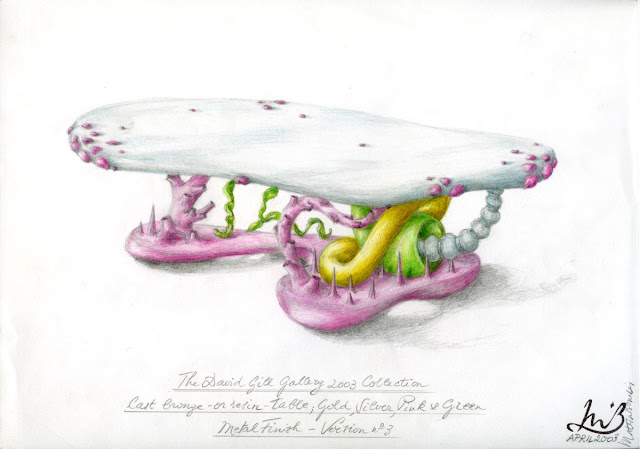 Only if a client expresses interest in a piece does he then embark upon the time-consuming and costly process of realizing his vision. Bonetti has worked with the same fabricators and craftsmen for decades and relies on them to transform his sketches into actual, real-life objects. Sometimes the team says that a certain object cannot be built the way Bonetti has imagined it. But sometimes, as is the case with the delightful Abyss table, an idea springs forth and manifests in the world.

Bonetti describes the vision. "The main idea was to make a piece of sculpture. I was imagining something telluric, from an abyss under the surface of the sea or in a very deep cave. Trees, corals, bubbling volcanoes—all these shapes together become a table, et voilà!"

Because it can be made to be completely flat, sheet rolled steel was used for the table top. But the table base was cast in bronze and gilded with white gold leaf and colored transparent varnishes. In 2004, the table was issued in an initial run of eight, and debuted at the David Gill Gallery in London. The original pink and green colorway has been joined by orange and gold, and two different shades of blue which seems fitting for a table with an underwater theme. 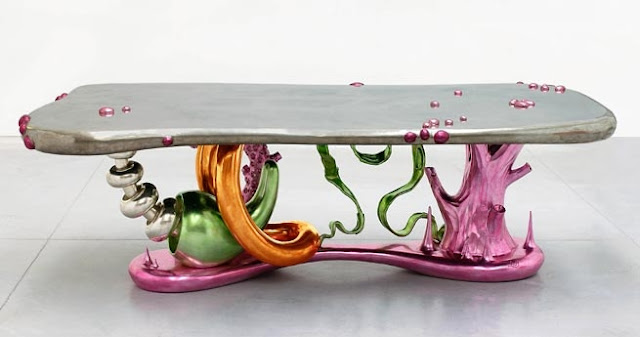 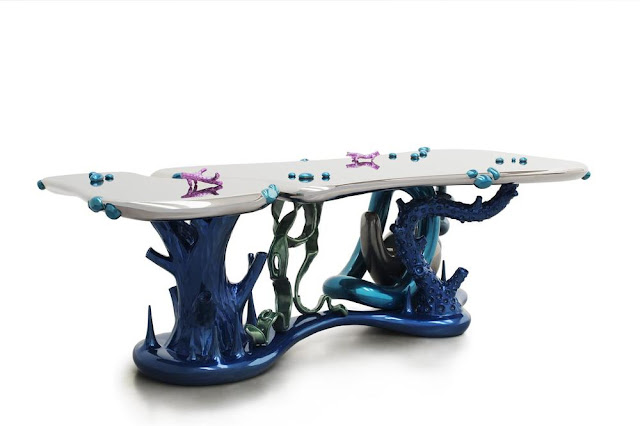 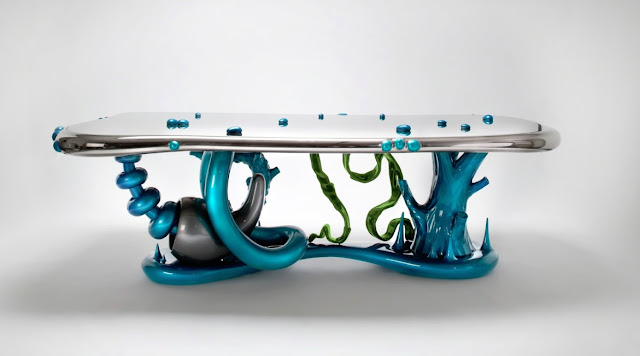 Because of its price ($300,00 roughly) and weight (it tips the scale at a whopping 838 pounds) one sees it in the homes of art collectors and gallerists.

The original commission came from collector George Lindemann who has moved his Abyss table from a previous home (first photo below) to a new home on Miami Beach (second photo below). (The whimsical, Op-Art-style Louis XVI chairs were designed by Bonetti as well!) 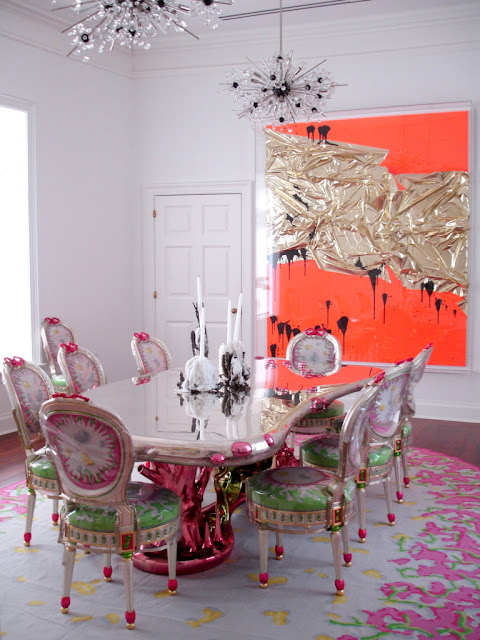 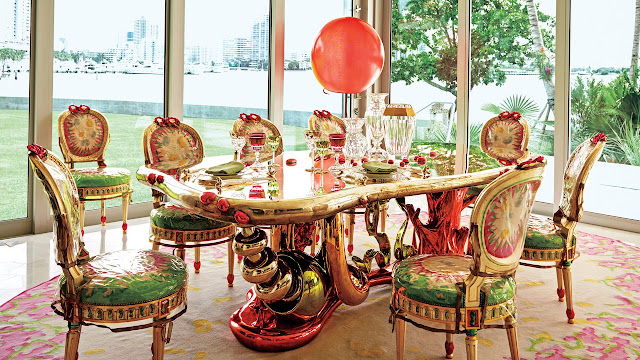 Parisian gallerist Pierre Passebone has one in his home... 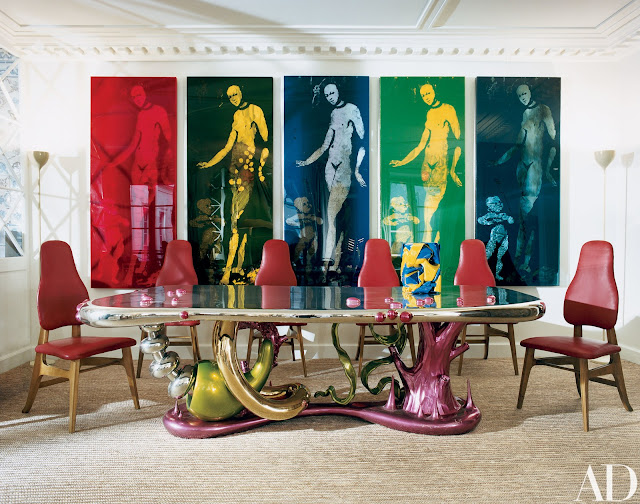 ...as does David Gill. Here it is in the vacation home he and his partner, interior designer Francis Sultana, share on the island of Malta. 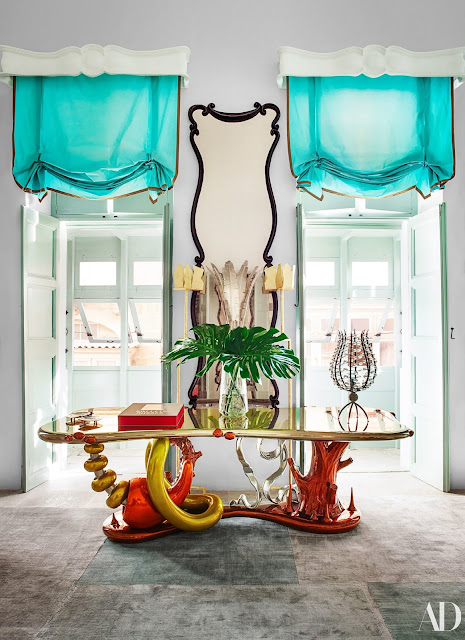 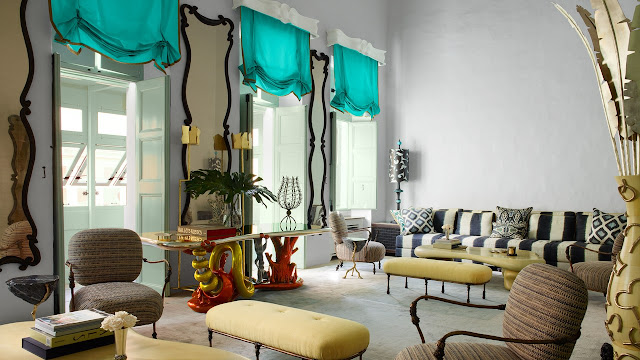 The work of Mattia Bonetti is included in numerous public collections, including the Centre Pompidou in Paris, the Cooper-Hewitt National Design Museum in New York, the Musée des Arts Décoratifs in Paris and the Victoria & Albert Museum in London.

From now until the end of this month, my local Bay Area clients can save an additional 20% off my already discounted trade pricing on upholstered pieces from Burton James, a company who has been creating quality, bench-made upholstered furniture for over three decades. Their products include sofas, loveseats, settees, sectionals, chairs, ottomans, recliners, and beds.

If you've been wanting to buy new upholstered pieces for your home, now is a great opportunity to save. Call or email to get started--visit my website for contact information!

*Additional sale discounts do not apply to the Benchmark and Select II Burton James furniture programs.
Posted by Jeff Fiorito, Allied ASID at 7:00 AM No comments:

Feeney Inc. has been around since 1948 when it was established as a post-war maritime rigging company making industrial wire rope. The Ralston family bought it in 1979 and the company now makes cable and rail systems. 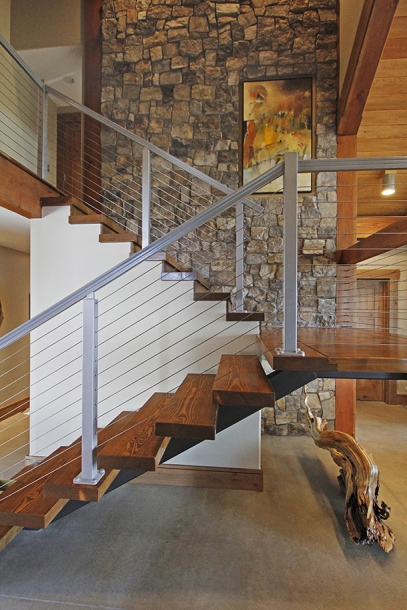 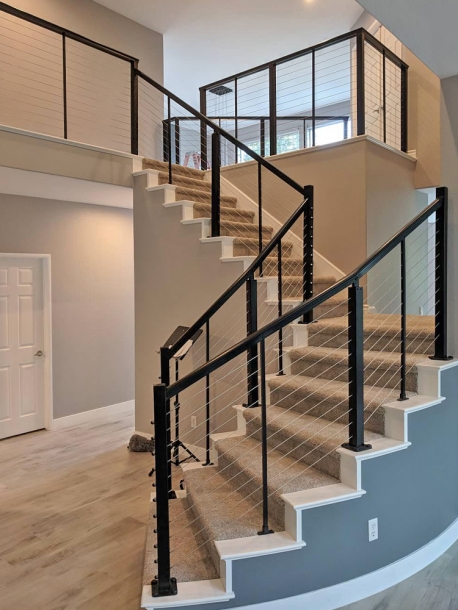 But they recently announced some great new alternatives to wire rope cables. Feeney now features resin and laser cut infill panels to use with their rail systems!

The acrylic panels come with many different materials such as handmade paper and natural grasses sandwiched between two sheets, to offer a variety of looks and textures for different styles and applications. 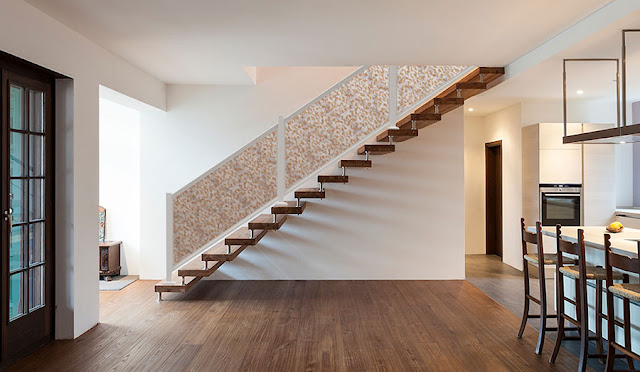 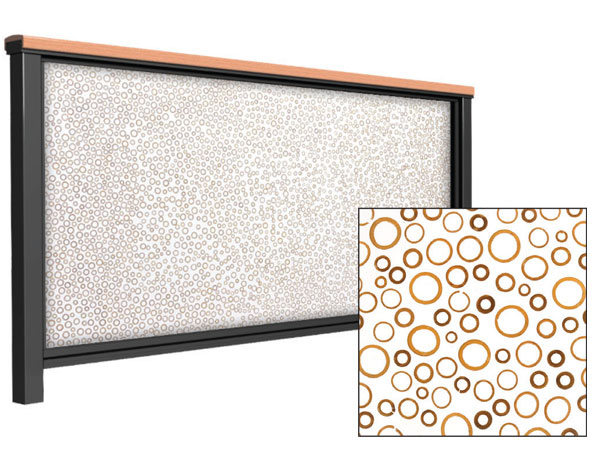 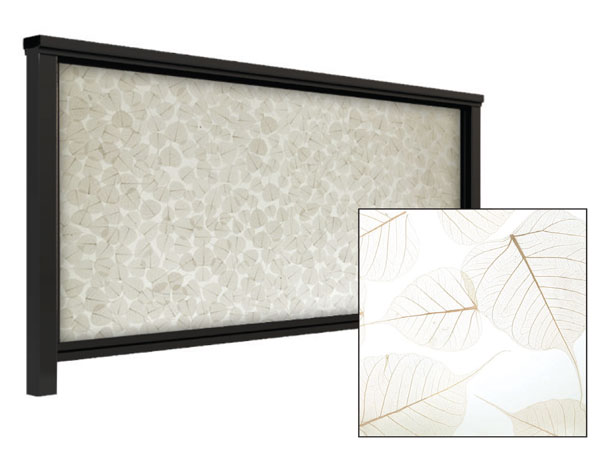 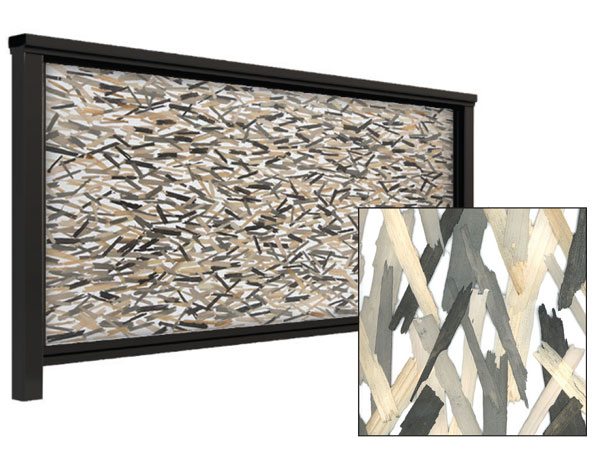 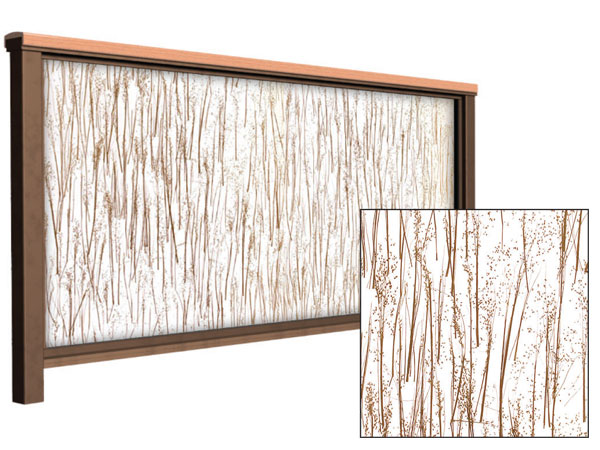 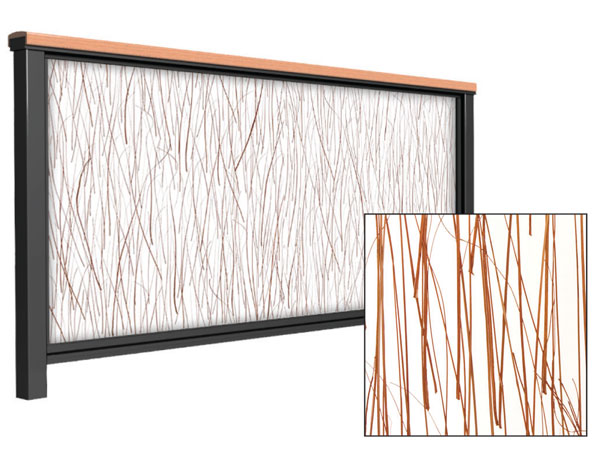 And the laser cut designs come in an array of colors. (That Kona coffee bean design would be a cute detail in a café!) 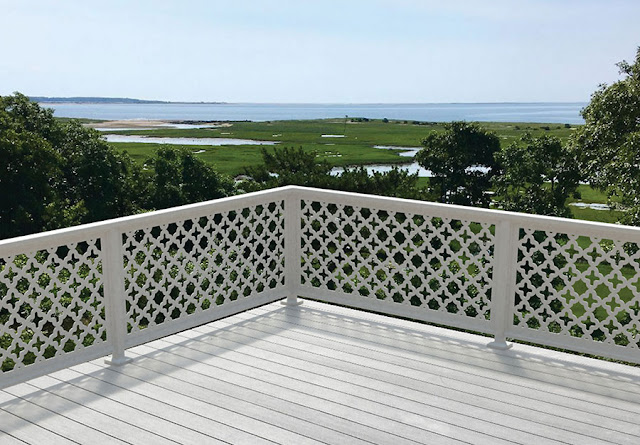 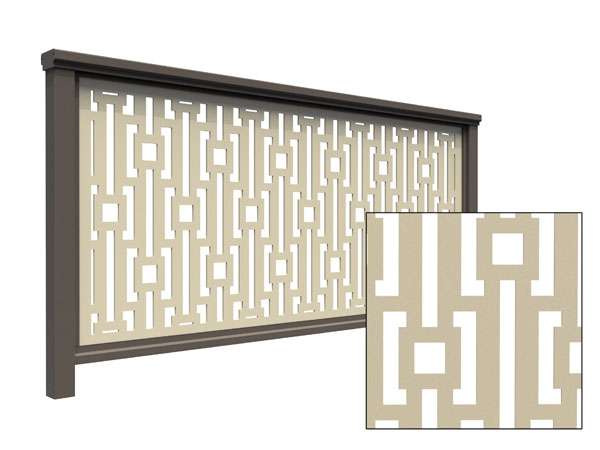 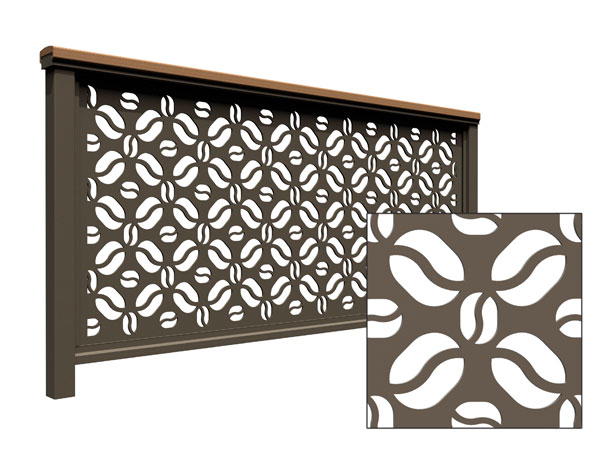 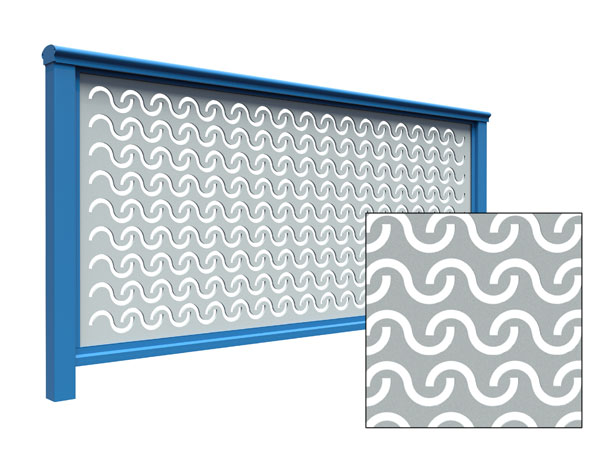 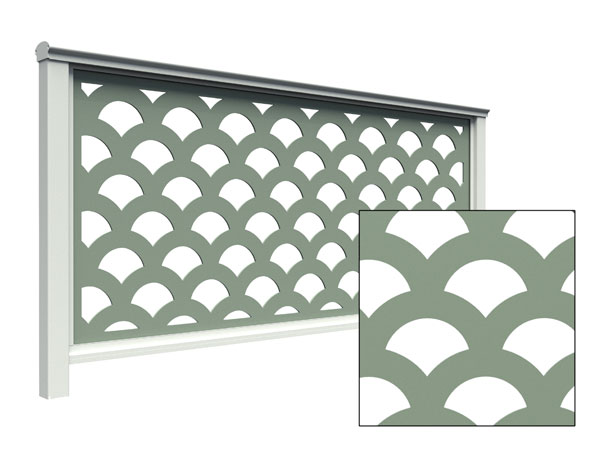 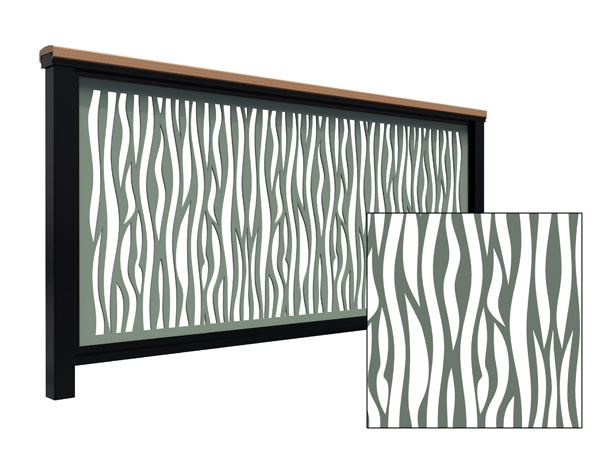 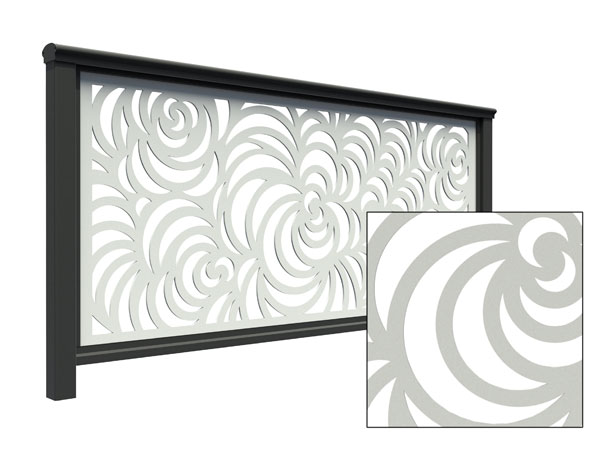