The Art of Tableau: Four Tips For A Better Display

I love to style a space and create tableaux. It has always been one of my favorite aspects of being an interior designer. I suppose it plays to the inveterate "collector" in me, to be able to group things together, to display objects of beauty or curiosity, or to assemble pieces which would ordinarily not be noticed on their own. Creating a tableau, or a "tablescape" as some call it, is one of the quickest ways to set a tone for a room. It's almost like creating a three dimensional piece of art, a sculpture if you will.

Here are four key things to keep in mind when creating a grouping or a tableau:

1) Think about the shape your grouping makes and how that works with what is around it.

2) Include tall, medium, and low objects for a variety of levels.

3) Odd numbers work best. (This works for things like pillows and furnishings as well.)

4) And remember Design Mantra #1: Contrast brings interest (previously here)! Put rough next to smooth, organic next to man-made, antique next to modern, light next to dark, large next to small.

In the examples below by Robert Couturier, notice how the table lamp and the objects grouped around it make a general pyramid shape. The trio of vases (odd numbers work best!) make a little tableau in and of themselves with differing heights, colors, and textures. They also create a pyramid shape echoing the overall arrangement. In the next tableau, the large black marble bust on the left balances out the grouping of smaller objects to the right; the two groupings are mirrored by two framed pieces of art above. 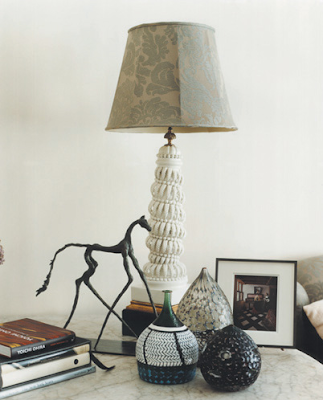 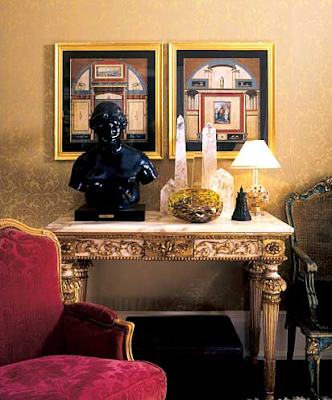 Above tableaux by Robert Couturier


The following collection of organic and ethnic elements is unified with color and texture but the arrangement is that of an inverted pyramid, a concave shape: the table lamp at the left and baskets at the right are large anchor pieces for the progressively smaller objects in the center. 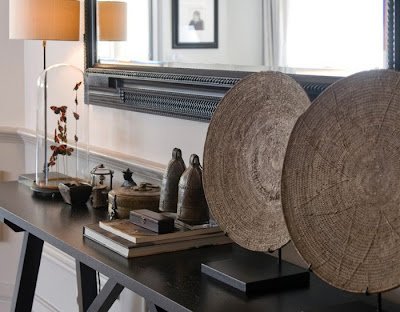 The tableaux below by the fabulous Kara Mann are great examples of levels. In the first one, Mann creates a great waterfall effect from the chandelier to the peacock to the palms to the chest to the seat, drawing the eye down and up. In the next, she has arranged boxes and books in a step arrangement, from the surface of the table up to the skull and shade of the table lamp. 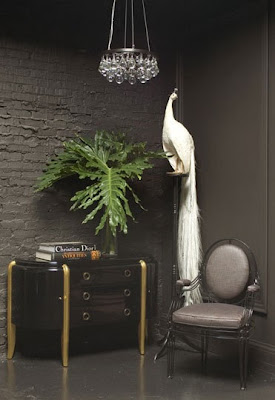 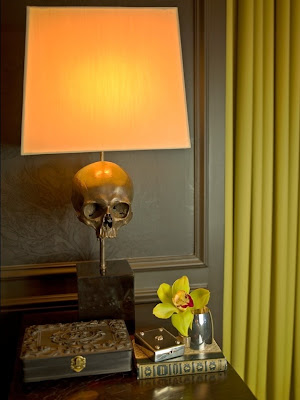 Above tableaux by Kara Mann. Photos used by kind permission.

This next tableau may be simple but it is bold, strong, and very effective. Two slim pyramids are balanced by a painting of an echoing shape: the painting's size and negative space are a good match for the pair. 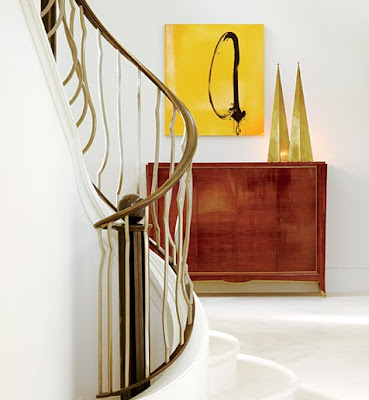 Tableaux can tell stories, they can add drama or humor, they can be minimalistic or ornate, they can feature pieces of art work, objects from nature, even personal mementos from exotic vacations or charming pieces from childhood. So grab a vase, a book, a branch or seashell, be adventurous and have fun creating your own tableaux.

This is the first in a series of tableaux posts. Look for more in the future.
Thanks for reading and happy designing!
Posted by Jeff Fiorito, Allied ASID at 8:00 AM