A Kitchen Light That Kills Bacteria and Germs!

Here is an amazing new product I must share with you. A company called Vital Vio in Troy, New York has created a light fixture that actually destroys germs and bacteria. This promises to be a valuable addition to the design and lighting of hospitals, gyms, restaurants, airplanes, and offices, but also residential kitchens as well, where germs on counters are prevalent and food safety is a top priority. Called ellumi™, Vital Vio’s White Light Disinfection™ LED Technology uses photo-activation to produce Reactive Oxygen Species (ROS) which causes irreparable damage to the cellular structure of bacteria and germs.

Make ellumi™ work for you

*Continuous around the clock cleaning so you don't have to

*Built in dimmer switch so you control the amount of light

This is effective on Strep, Staph/MRSA, E. Coli, Salmonella and 18 other bacteria.

The light excites certain molecules in harmful microorganisms through photo-activation. 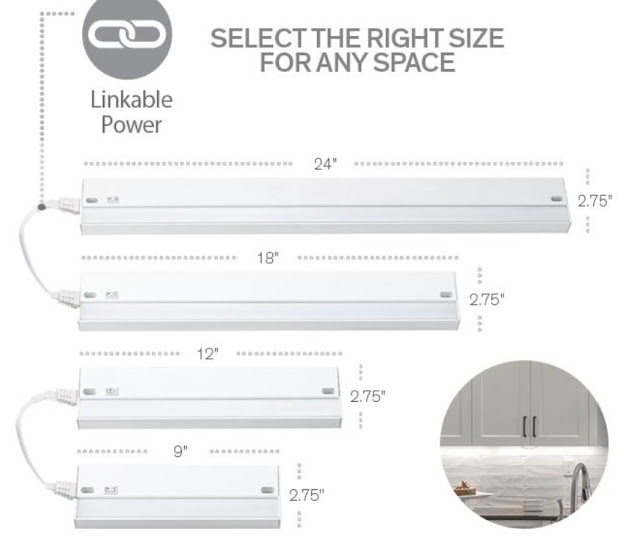 While the profile is a bit chunky, it can be hidden with the addition of a rail. And eventually, I am sure they will make a tape strip like most LED under-cabinet lighting available now.

Every now and then, my design radar picks up a product that boggles my mind. And these three dimensional tiles are doing just that. Based on Michael Aram's White Orchid Collection of dinner and housewares, these inspiring tiles he created in conjunction with Artistic Tile are simply jaw-dropping. Orchids are waterjet sculpted out of white Thassos marble and placed on a background of grey and white Bianco Carrara marble for a stunning look. While they are not suitable for wet locations like a shower, the tile could be applied to a vanity wall in a bathroom--or it could be used as a very special tile accent in a kitchen area. 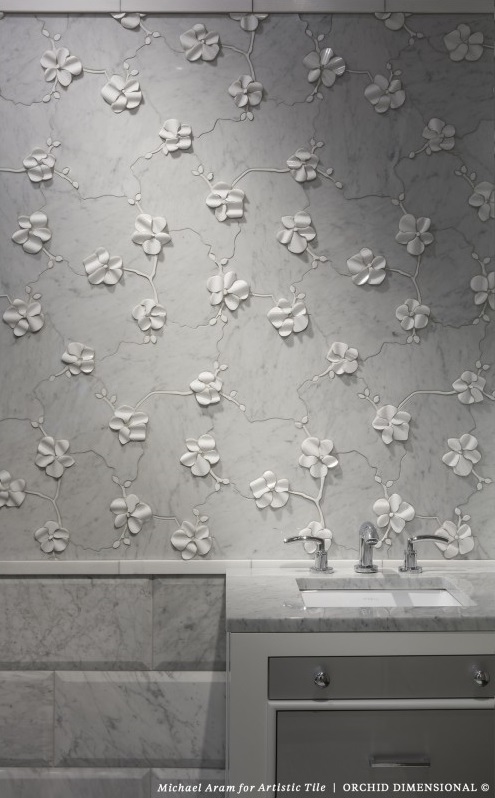 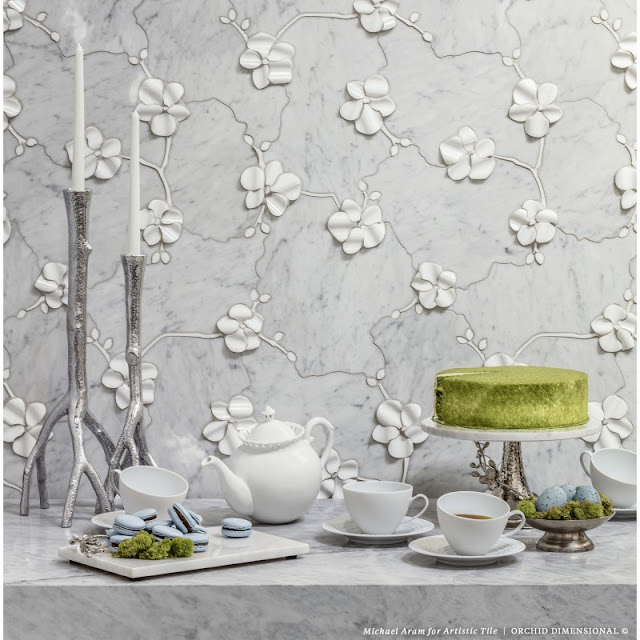 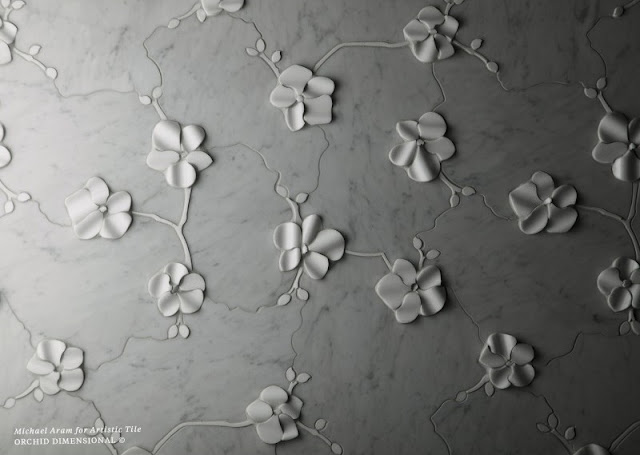 I hope these tiles inspire you the way they have me.
Happy designing!
Posted by Jeff Fiorito, Allied ASID at 7:00 AM No comments:

It may seem crazy to make a sink out of wood, but if created and finished properly, a wooden sink can function like a sink made of porcelain or glass. 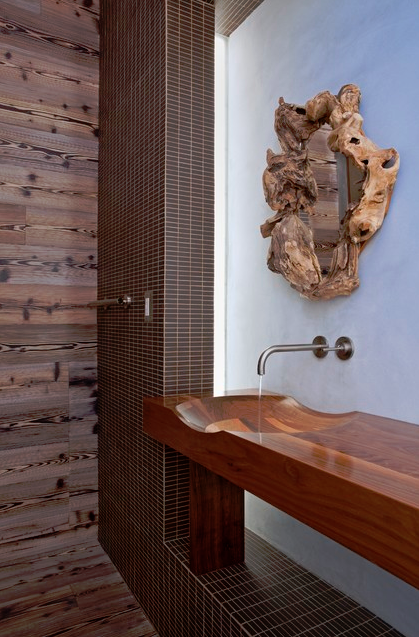 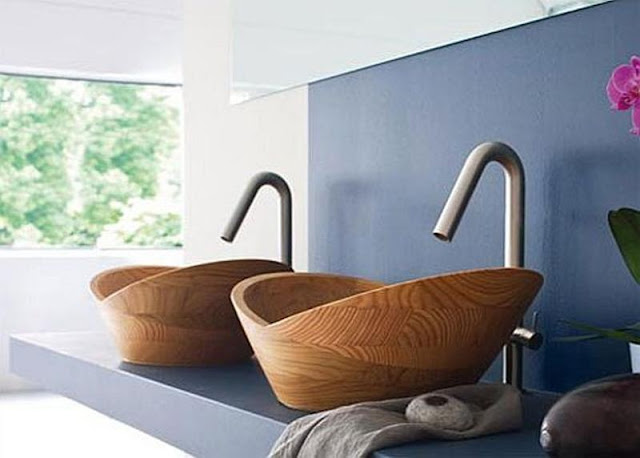 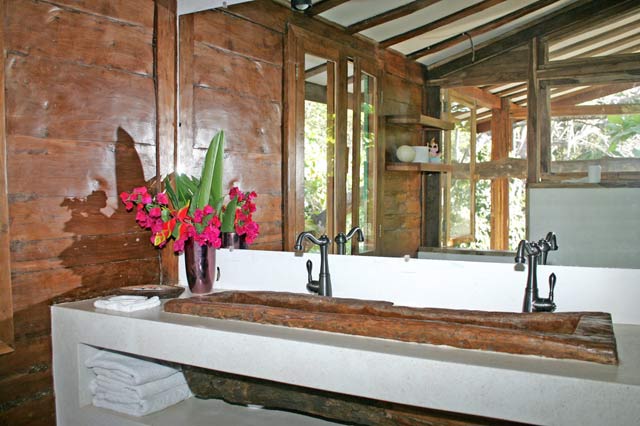 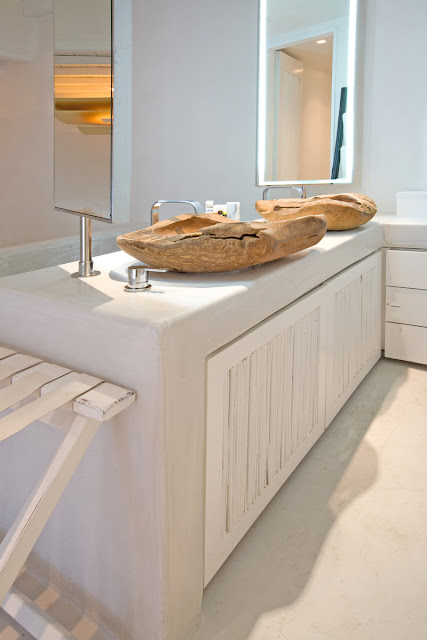 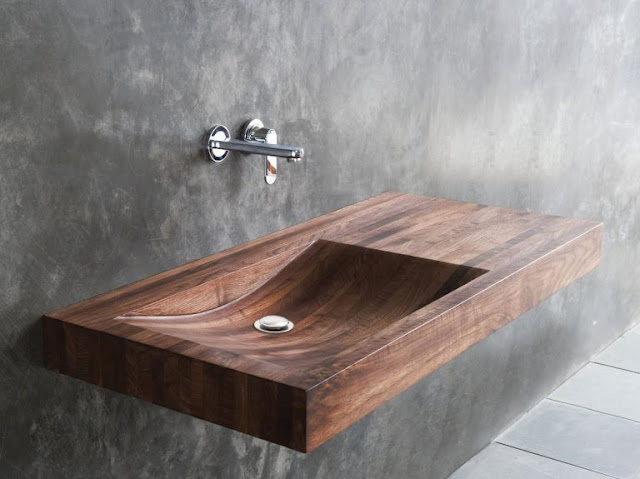 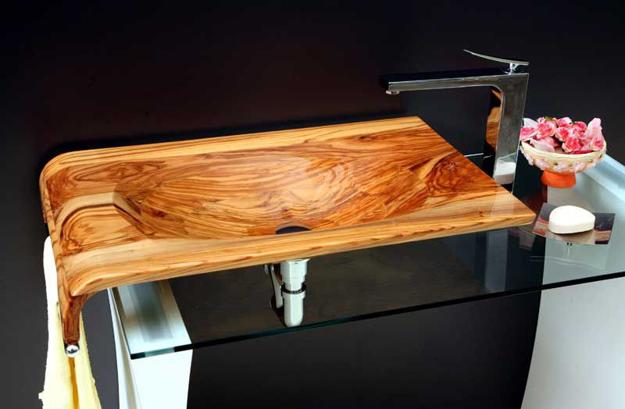 Robern, a leader in bathroom amenities and furnishings has introduced a new program of floating vanities. The Curated Cartesian Vanity collection is a great opportunity to being a high-end look to your bathroom or powder room. Vanities come in single, double, or triple drawers in white, grey, or smoked mirror. Features offered include spacious drawers and tip-out storage options, in-drawer electric outlets, hot storage, and LED night lights. And conveniently, Robern has paired with Cosentino, makers of Silestone to provide quartz counter tops for this line, which is fantastic for designers since it is always difficult finding a remnant small enough for a single vanity like this. Problem solved! 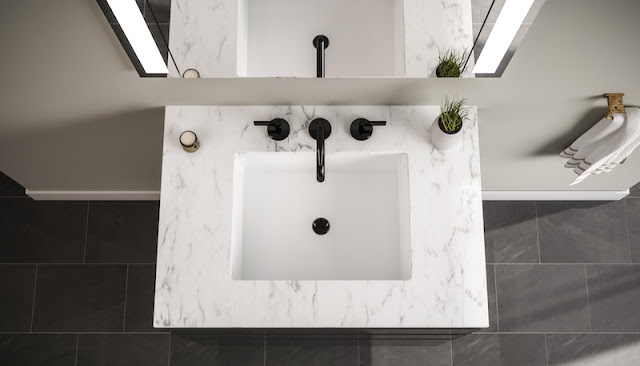 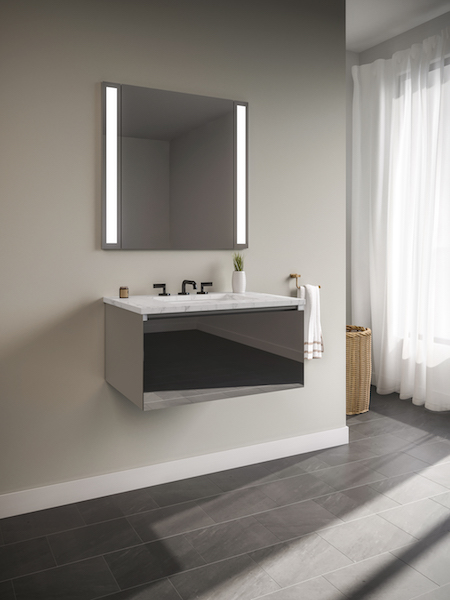 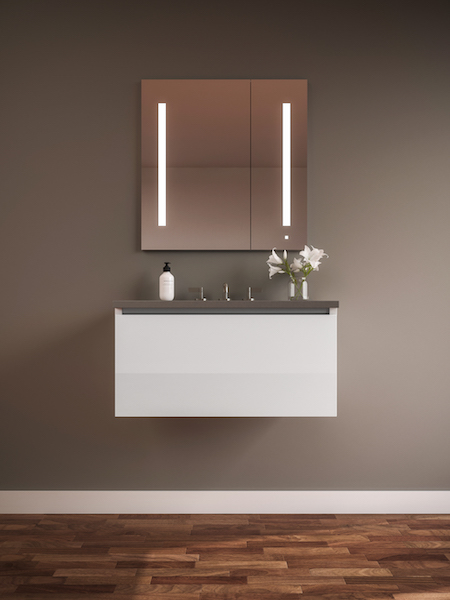 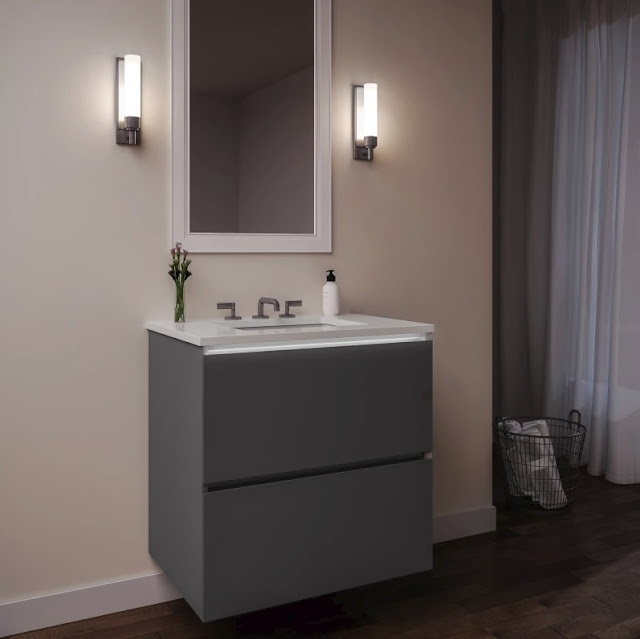 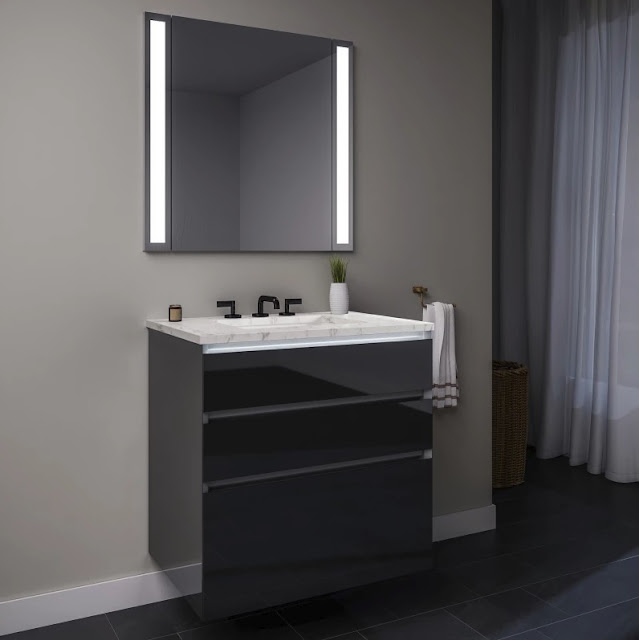 Know Your Chairs: The Egg™ Chair

If you're not totally egged-out from yesterday's Easter egg hunt and, if you're anything like me, devouring the last of the Cadbury chocolate eggs, let's take a look at another kind of egg for this installation of Know your Chairs.

Designed by Danish architect and designer Arne Jacobsen for Fritz Hansen, the Egg™ Chair is an iconic piece of mid-century design. 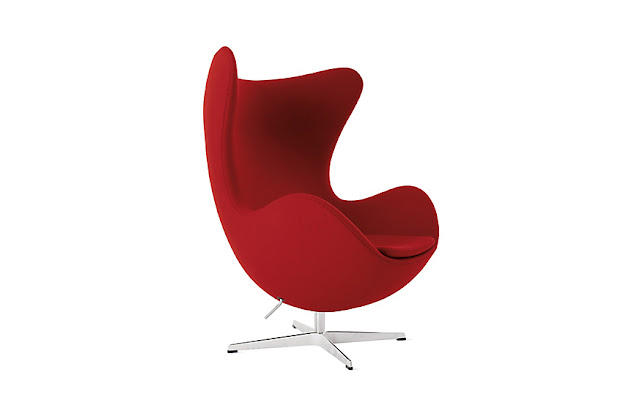 Inspired by the bent plywood designs of Charles and Ray Eames, Jacobsen created this marvel in 1958 for the Radisson SAS Royal Copenhagen Hotel in Denmark when it opened in 1960.

Here we see the Egg™ Chair in the lobby of the SAS Hotel and Arne Jacobsen with a pair of chairs also at the hotel. The curved contours of the chair--like those of its namesake, an actual egg--served to soften the hard angularity of the modernist hotel itself, a contrast that is a hallmark of mid-century design. 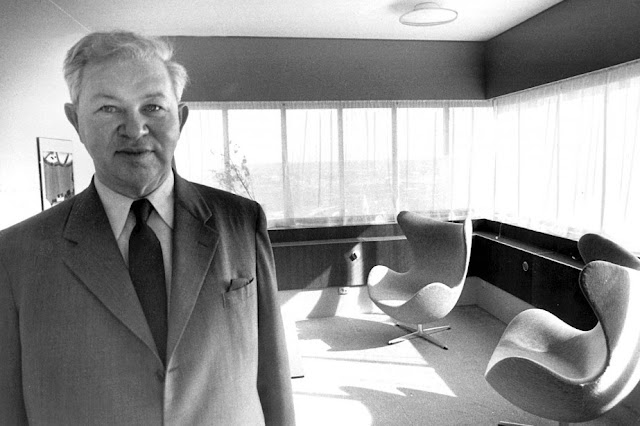 Yes, the Egg™ Chair is modern, but because of the dynamic of pairing opposites (see my Design Mantra #1 to the right, "Contrast brings interest!"), the Egg™ can fit nicely with other periods and styles. 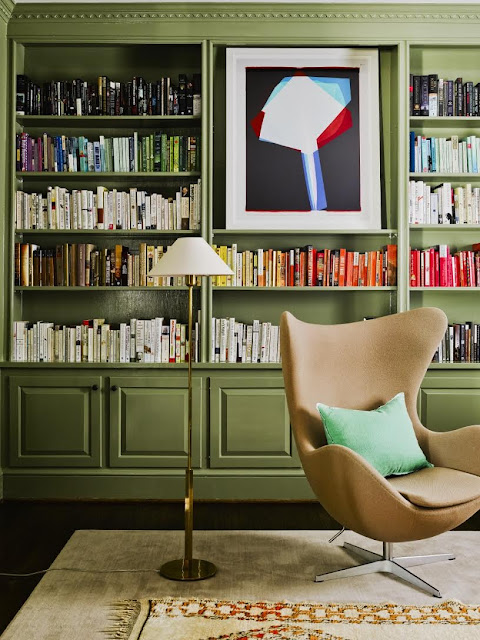 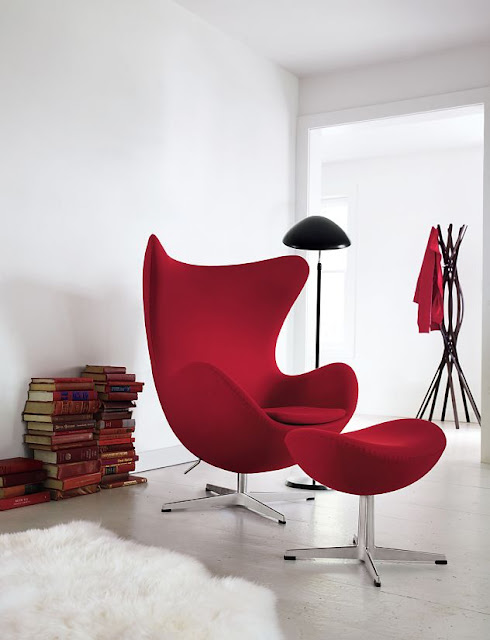 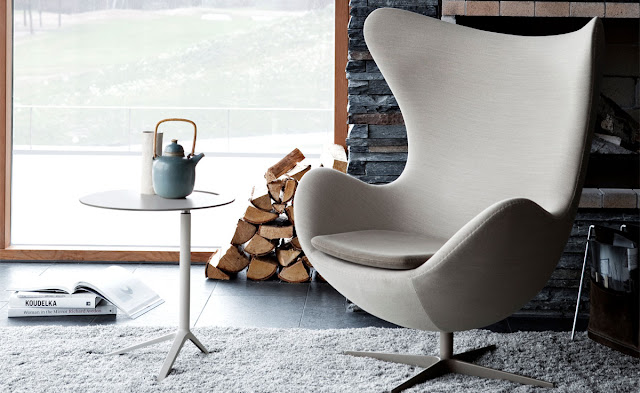 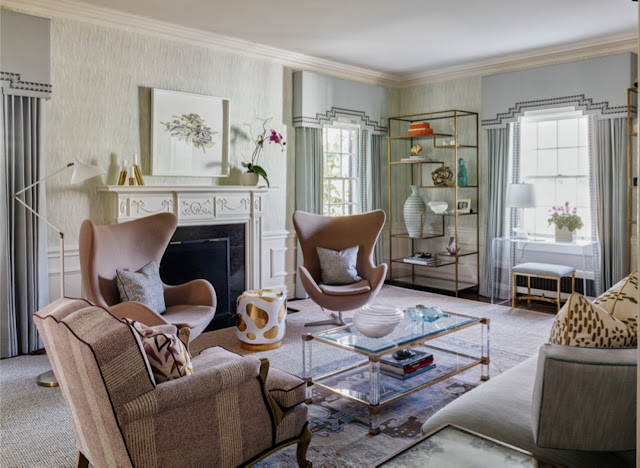 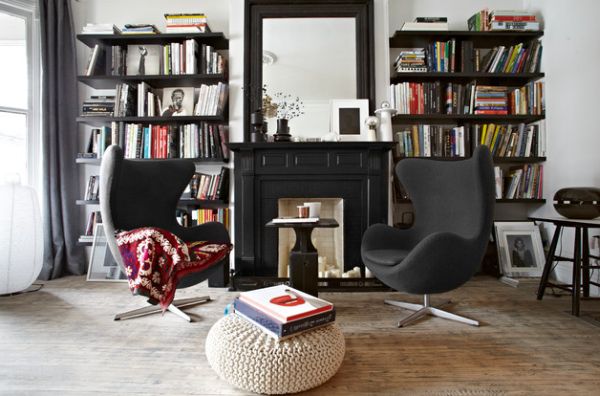 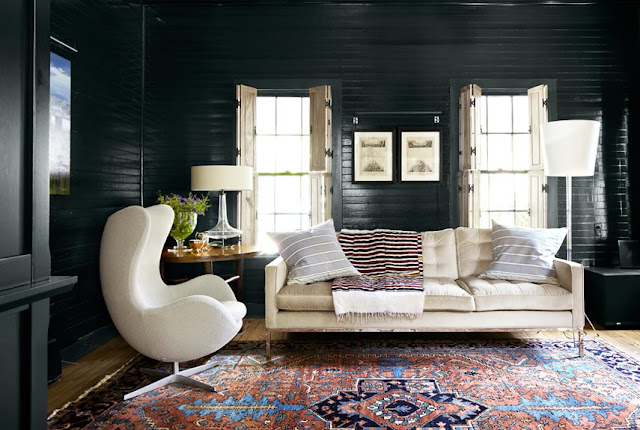 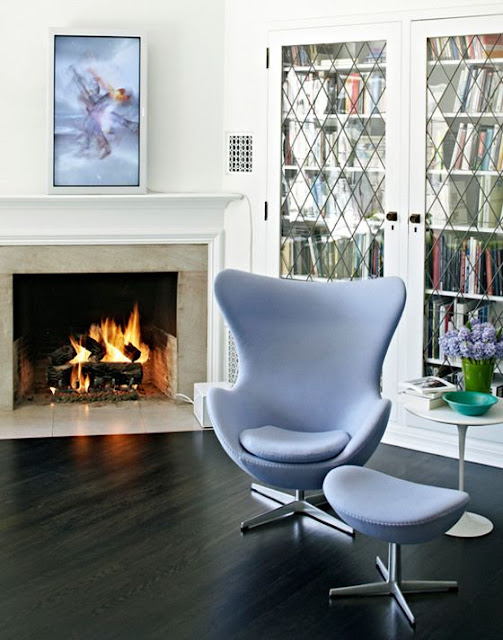 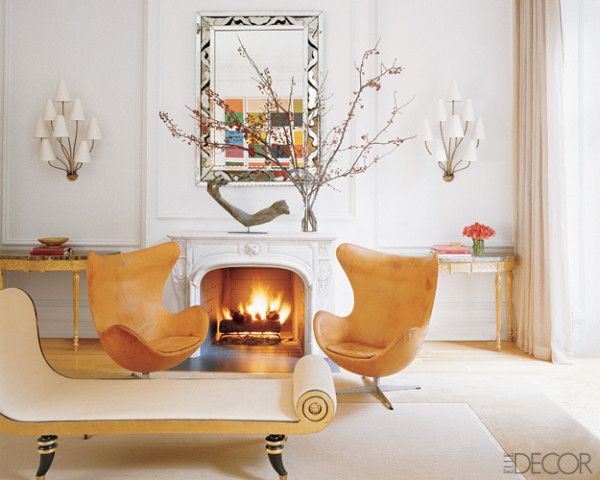 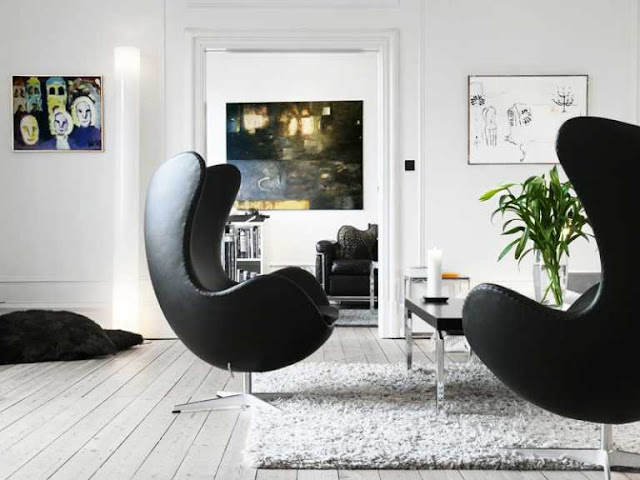 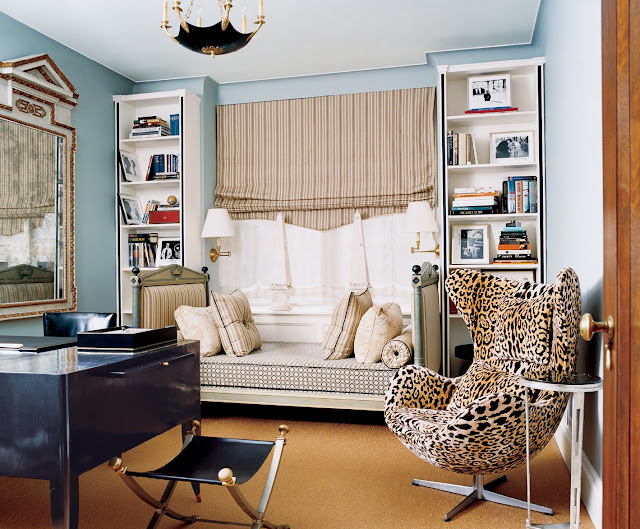 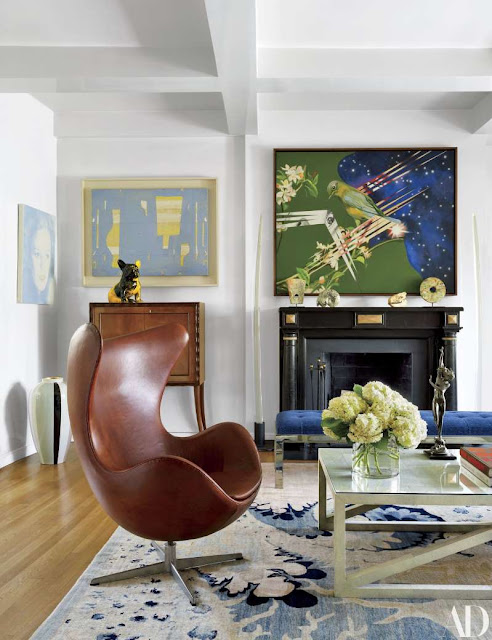 The chair is still manufactured today by Fritz Hansen using the same exacting techniques: 1200 hand-sewn stitches go into the making of each Egg™. The photo below from their website obviously contains a typo since the company was founded in 1872, not 1972! 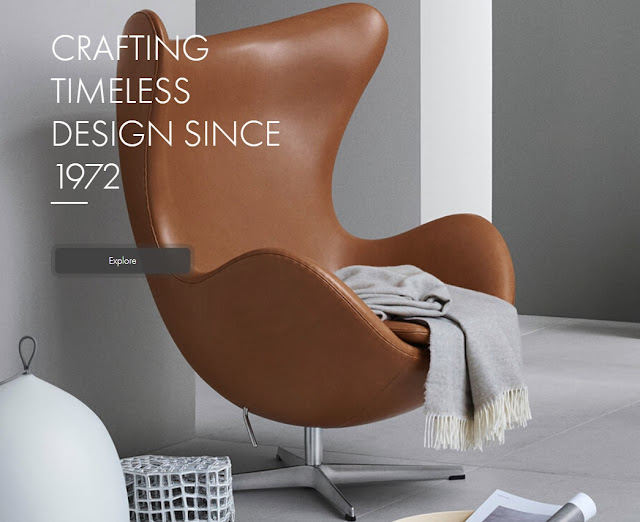