I love when I discover new products and Timberwall, a company based in Canada, has developed a way to get that coveted modern-rustic look quickly and easily with peel and stick wood products.

Some products come in peel and stick planks like the Barnwood item shown below in Driftwood Grey and Heritage Brown. 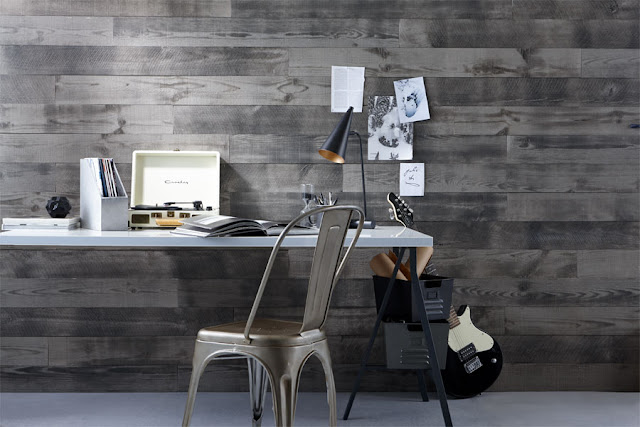 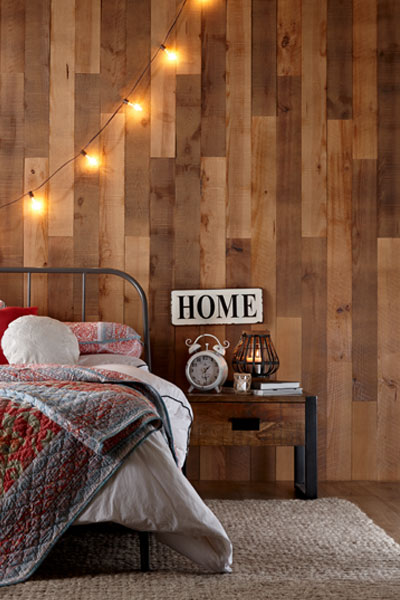 Their Landscape product seen below in Arctic and Urban comes in varying thicknesses so the resulting application is raised in some spots creating a more organic feel and adding even more visual interest with depth and shadows. 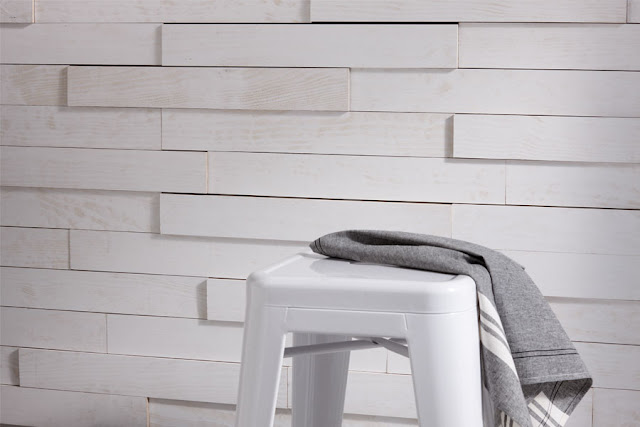 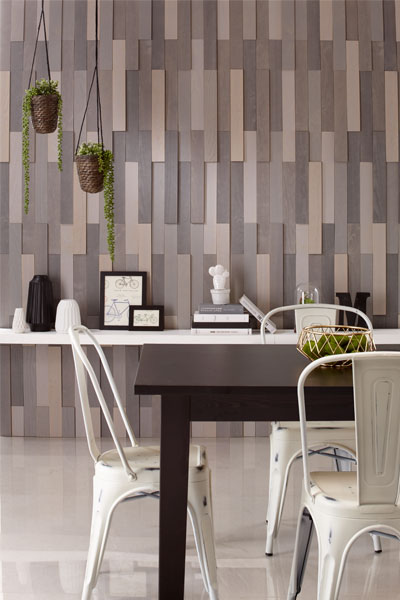 I'm crazy about their Mosaic series which comes in a Basketweave pattern, shown in Oak Brown and Oak Grey... 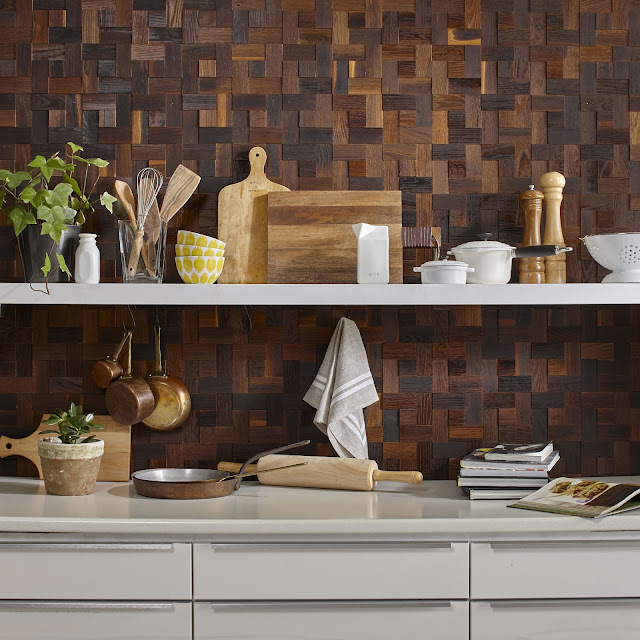 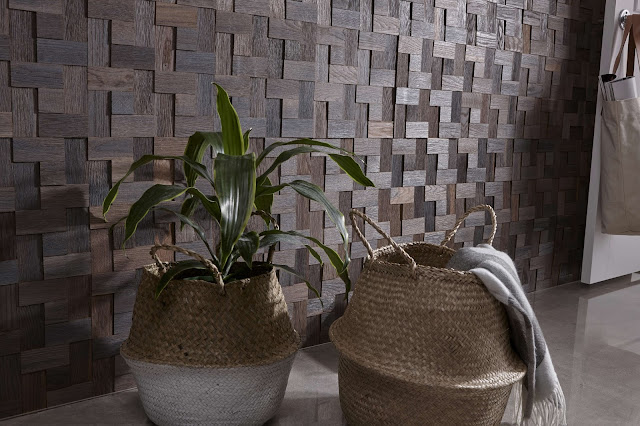 ...and the Chessboard pattern in Ash Brown and Oak White. The mosaic series is sold in sheets which makes application even easier. 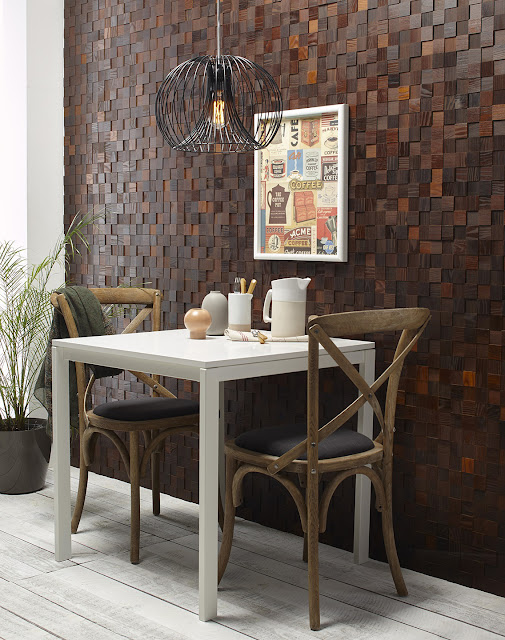 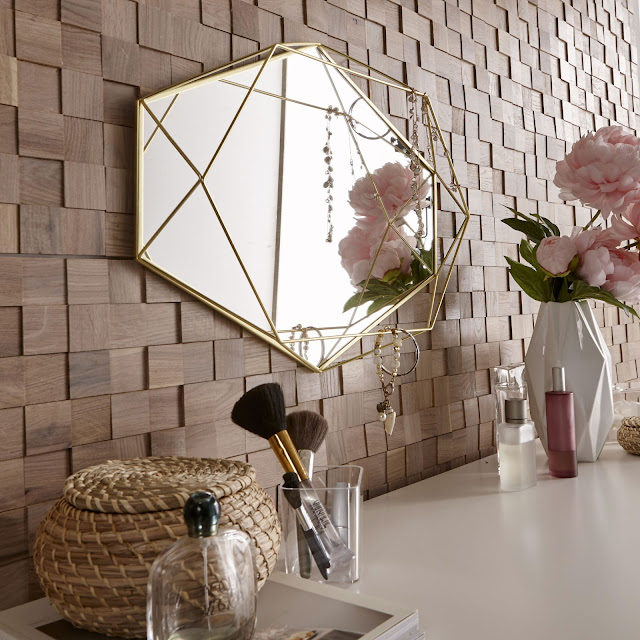 I'll be specing this for my next client who wants an organic-urban touch...
Happy designing!
Posted by Jeff Fiorito, Allied ASID at 7:00 AM No comments:

Know Your Sofas: The Fainting Couch

When I was in design school many, many years ago and had to take a multi-semester course called "The History of Furniture," I rolled my eyes and thought, "This is going to to be a torture class...how interesting can the history of furniture possibly be?" But that was shortsighted of me and once the class started, I saw that it was much like my Art History classes I took many, many years before that: nothing exists in a vacuum, whether it's art, furniture, clothing, novels, architecture, or design. Everything springs from a certain time period which is connected to a certain cultural and societal perspective, which naturally must be interwoven with politics and how people see themselves or wish to present themselves. By studying what people surrounded themselves with, one gains insight and understanding into what was happening in a single country, a continent, or the world at that time. I don't think it's an exaggeration to say that studying furniture--or art or literature--is a way of studying and tracking human evolution; it is actually quite fascinating.

So with this in mind, let's look at a variation of the sofa from the Victorian era called a "fainting couch." This version of a chaise longue (previously here) is asymmetrical, featuring a raised backrest at one end. And of course, this being the Victorian era, the wooden section of these backrests were ornately carved. Upholstery was in the rich jewel-toned heavy velvets of the time, and the fainting couch could be finished off with tufting. 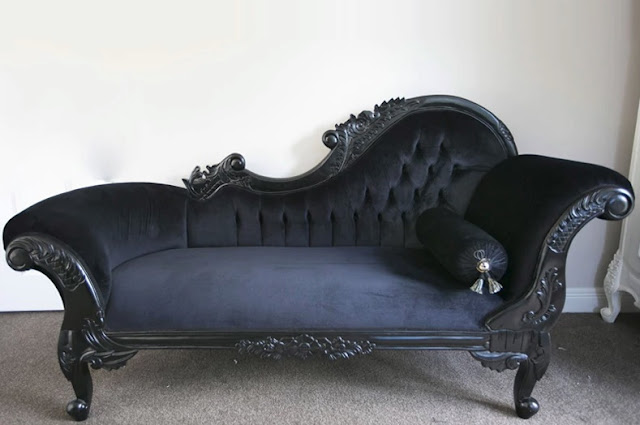 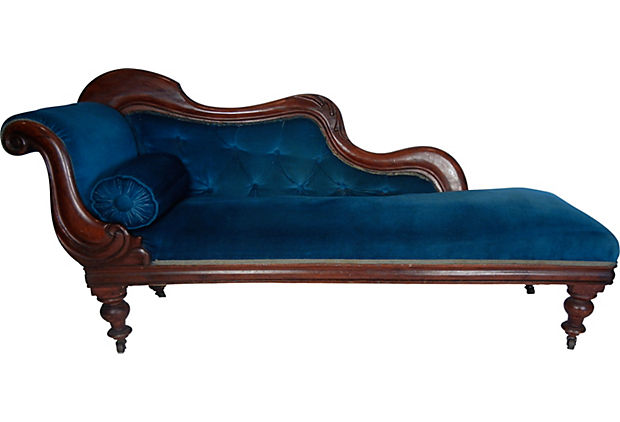 But why was it called a fainting couch? Well, there are a few concepts going on here at once...
Women of the Victorian era were considered fragile and delicate, so they often retired during the mid-day, to escape the heat of the sun when it was at its highest, or its merdian. Because of this reason, these sofas were also called Meridiennes.

But it wasn't just sexism or perception that women were delicate... the fashion of the day dictated that women wear corsets, not allowing them to breathe properly or take full breaths, which could literally cut off up to 29% of oxygen to the body. No wonder women would become light-headed and need to lie down!

But there was another, deeper, and indeed psychological reason for fainting couches. The piece of furniture would often be placed in "fainting rooms," a salon or parlour that could be closed off, so that the woman could rest...but the real reason for a fainting room is connected to an exclusively female "ailment" of the time, something called "female hysteria." Symptoms of this vague ailment included shortness of breath, irritability, vaginal leakage, sexual fantasies and "a tendency to simply cause trouble." Of course the underlying cause of such symptoms are now seen as sexual frustration but in the repressed Victorian era, such things could not be recognized or spoken of. So doctors or midwives would come to a patient's home for "treatment" which included fully clothed pelvic "massages" until a "hysterical paroxysm" (or orgasm) was reached...all in the privacy of the fainting room. Later, massages were replaced with mechanical means which could be used by a doctor or a patient alone. This odd moment in history was captured in a marvelous stage play by award-winning playwright Sara Ruhl called "The Vibrator Play." 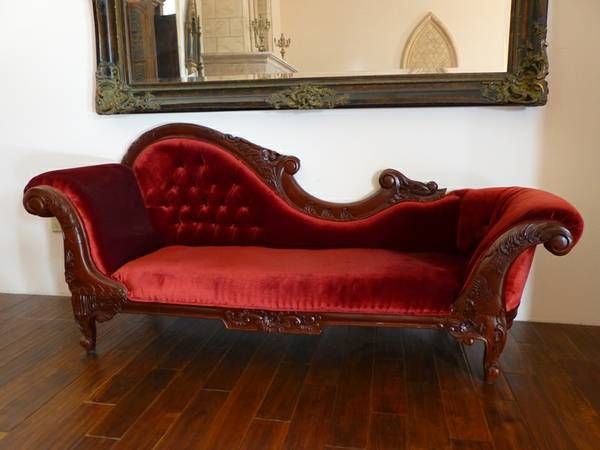 Couture For Your Chairs

I am currently at work on a whole-house project for a client who lives a literal stone's throw from the gorgeous coastline here in the Monterey Bay Area and the brief was to infuse the sense of the coastline, the ocean, and the beach into the home without resorting to "beach" or "surf" clichés.

And one of the ways we are doing that is with a limited color palette of blue, white, and gold. Of course blue and white could be considered cliché when thinking of a beach house, but my client's taste leans toward modern minimalism. When done with interesting geometric fabrics and a muted color palette, the beach factor is dialed down and the design resides in a decidedly more sophisticated area.

For her dining room, we are having a pair of custom host chairs made that will be covered in two wonderful fabrics. This is one of the advantages of working with an interior designer: we can customize and design unique pieces of furniture that you simply can't get anywhere else. I have had clients tell me that the frustrating part about ordering furniture from the big, standard vendors like Pottery Barn and Crate and Barell is that the chair or sofa they may have chosen only comes in four or six colors and perhaps four patterns. But with me, you can get chairs, ottomans, sofas, sectionals in whatever fabric we find that captivates us.

With an elegant, scoop-armed chair chosen... 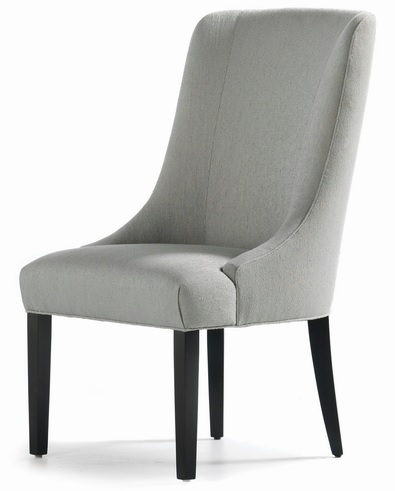 ...my client and I were captivated by a lovely geometric pattern that, while it doesn't explicitly reference the ocean, recalls waves or even tangles of kelp or seaweed. To further customize this chair and make is something truly unique and beautiful, we are putting this fabric only on the outside back... 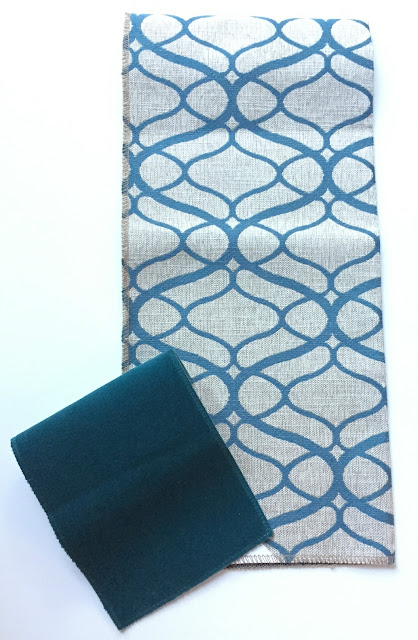 ...while the inside back and the seat will be upholstered in this rich aquatic colored velvet which has been specially treated to resist stains. 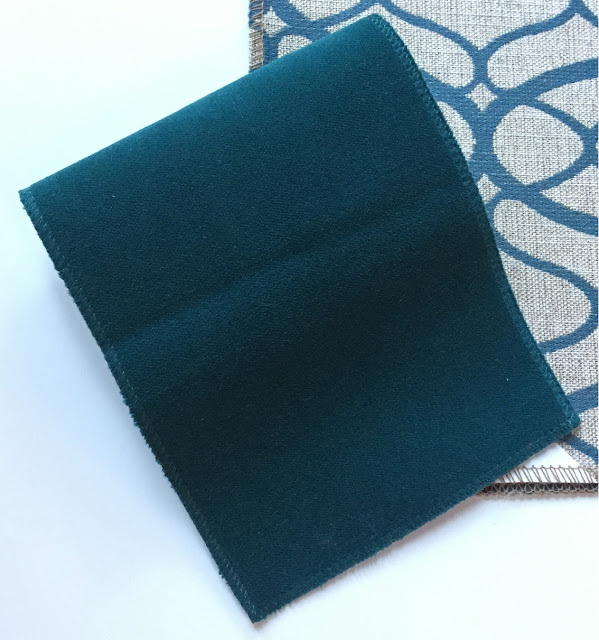 The fabric is on its way to the manufacturer in North Carolina and we should have our custom chairs in another several weeks!

I love creating customized furniture for clients. We can customize case goods like buffets by choosing our color or wood stain and whether there are fabric, leather, raffia, or mirrored panels. And of course we can dress furniture in nearly any fabric we wish, often with welting and nailhead options as well. There is nothing "off-the-rack" about it. It really is like having couture clothing designed for your chairs!

If you'd like to furnish your house with unique pieces of furniture created to your own taste and style, give me a call.

A New Sink On The Block: Composite Granite

Much like how solid surface quartz materials took over the counter top market a while back, we now have another engineered material for sinks! Composite granite is a solid surface material made from granite stone dust and acrylic resins molded into a sink form. And I am seeing more and more composite granite sinks popping up...

While the material is made from granite, it has a uniform color and appearance, unlike actual stone. But the true advantage of this material is its extreme durability. Where porcelain can chip and stain, and stainless steel can dent and scratch, composite granite is highly scratch resistant, and in fact might break glassware should you drop any in the sink. Its non-porous nature also makes it stain resistant.

Many companies now manufacture composite granite sinks such as Kohler and Franke.

Blanco has a line of newly reformulated composite granite sinks made from what they are calling SILGRANIT®. 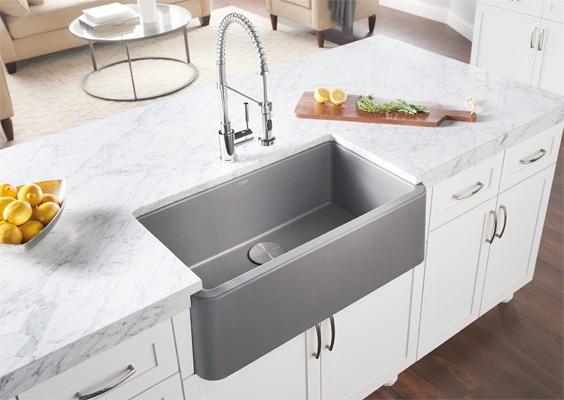 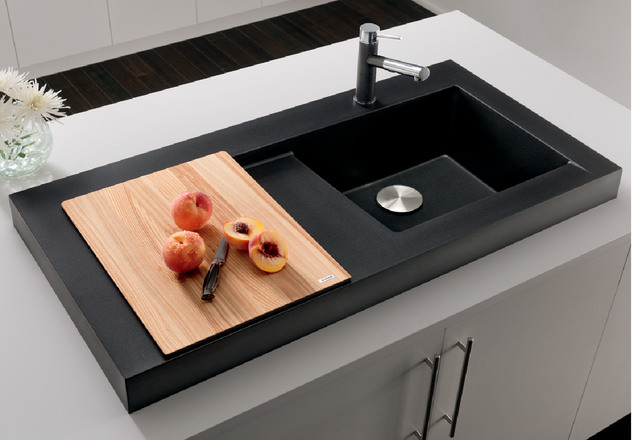 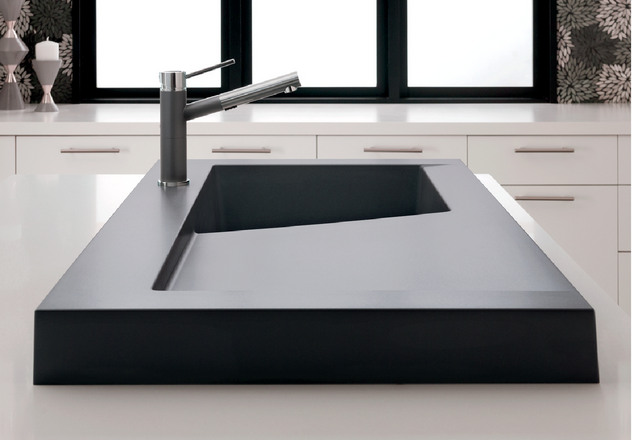 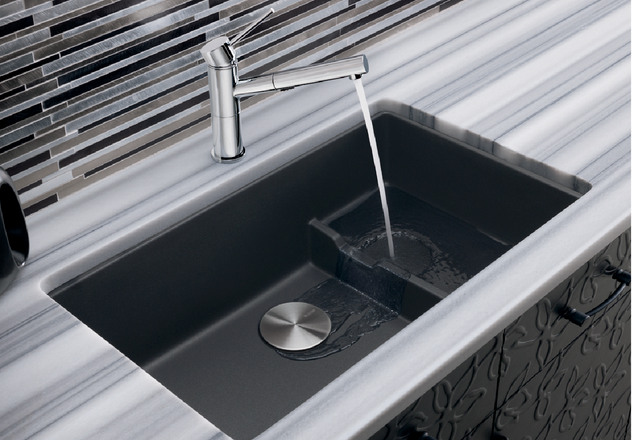 As you can see, the sinks from all manufacturers are available in many different styles and sizes, including single or double bowls, farmhouse or apron sinks, and drop-in or undermount applications.

Time To Head To The Beach Cottage! 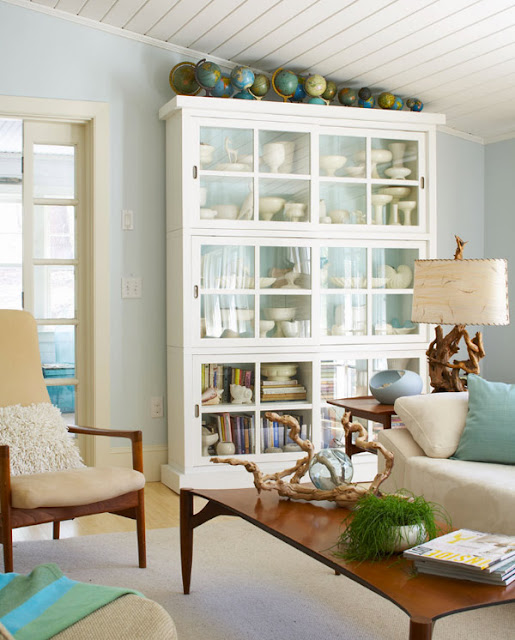 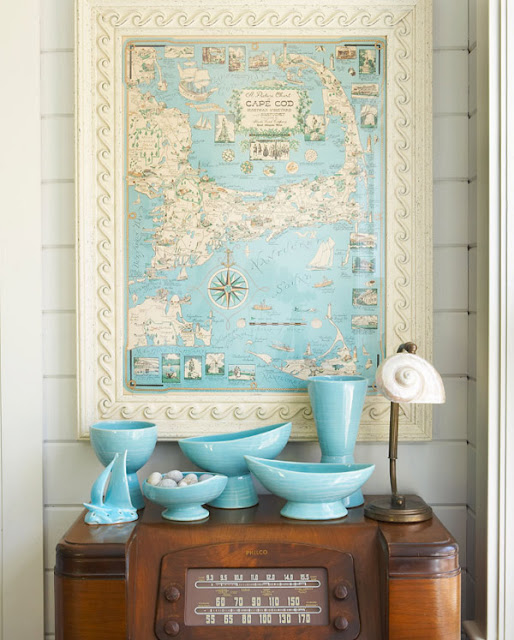 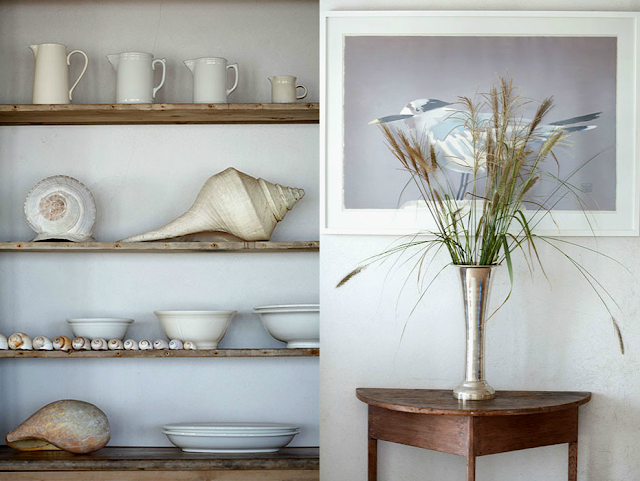 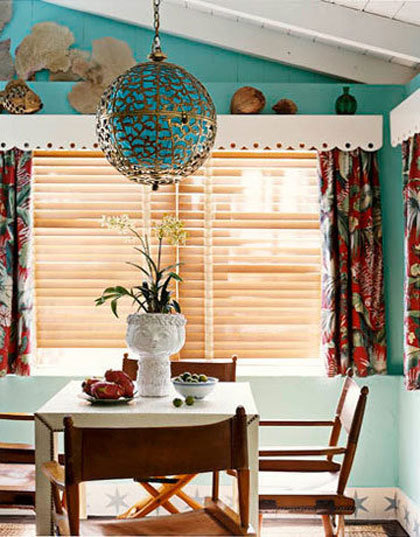 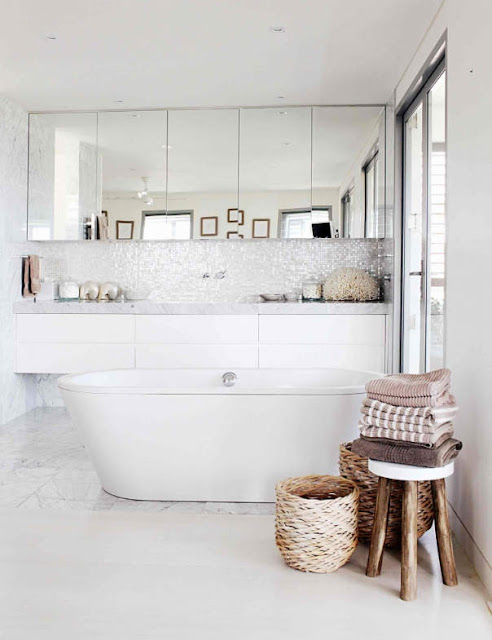 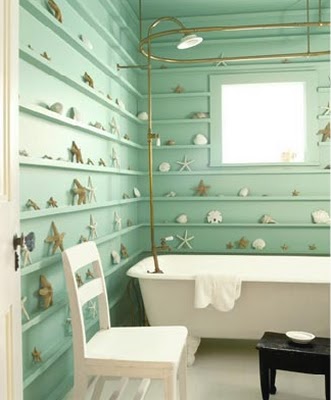 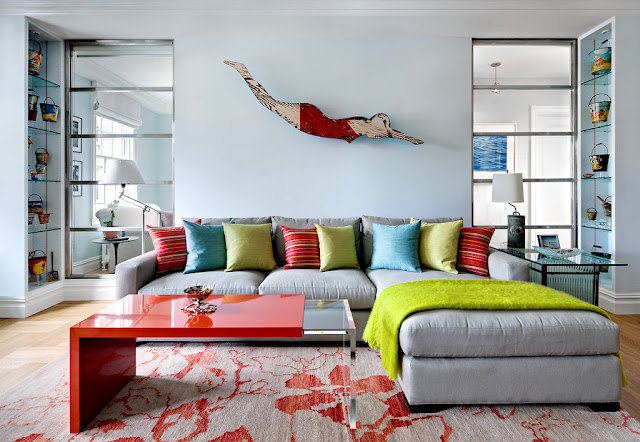 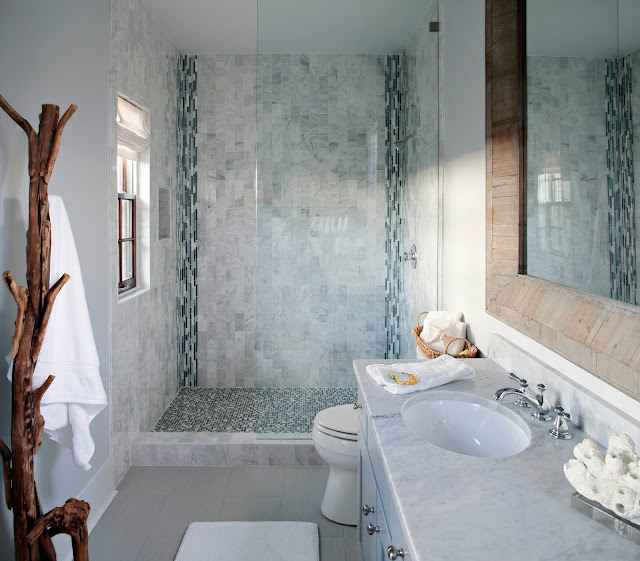 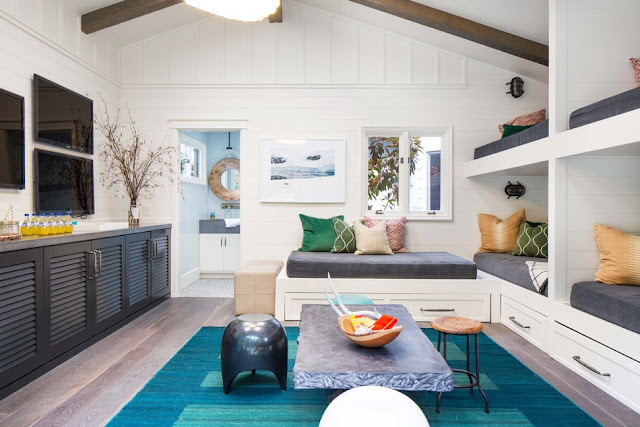 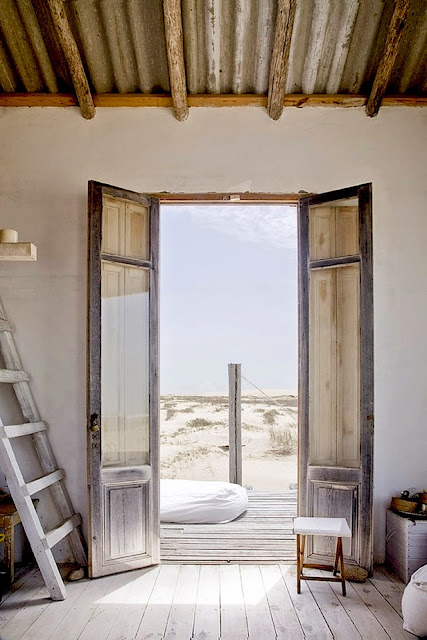 Happy designing and Happy Summer!
Posted by Jeff Fiorito, Allied ASID at 7:00 AM No comments: