When In Rome!: Five Types Of Roman Shades

If you're thinking of window treatments for your windows, there are so many options, with a myriad of not only drapery styles but also shade styles. As with anything in interior design, there is a whole encyclopedia of terms, forms, and details within the world of shades themselves. Let's take a look at a few of the more common types of Roman shades in particular.

Flat--Consisting of a piece of flat fabric without any pleats, folds, or channels, this type of Roman shade is good for windows where you will not be raising or lowering the shade often. The fact that it does not have any pleats means that the fabric does not fold up neatly or quickly when raised. But a flat Roman shade still provides light control and privacy while bringing color and pattern to a room. And this style in particular lends itself to prints since there are no channels or pleats to interrupt a pattern repeat. 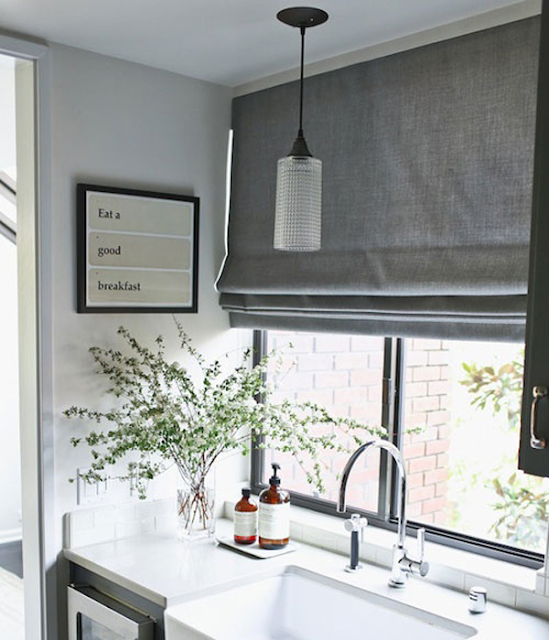 Plain or Pleated--This style is much like a flat Roman but with seams every eight to ten inches to help ease the shade in raising or lowering. As you can imagine, a tight pattern repeat would be interrupted by the seaming. As with any genre of knowledge, nomenclature can vary and I have seen this referred to as a Rear Tucked Roman shade. The Pleated name also can refer to a different type of shade, one we will see a few points down. 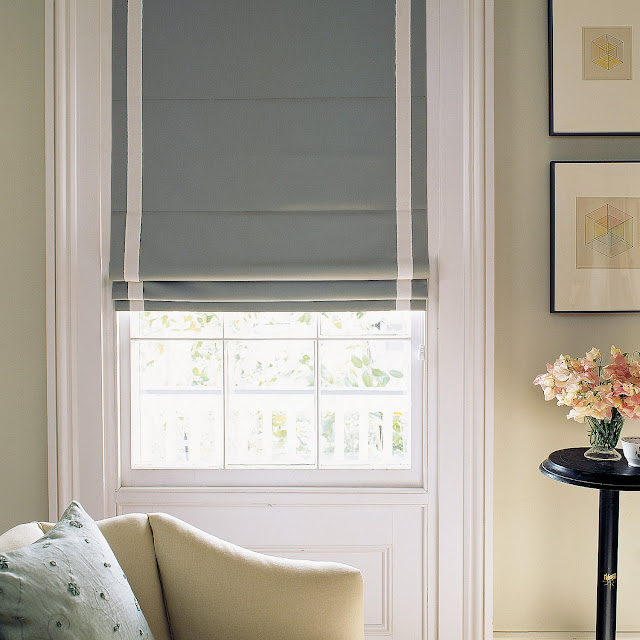 Relaxed or European--Here we have another variation of the flat shade but with a drooping center bar at bottom which gives the shade a casual, country appeal. But done with the right fabric, it could also read as extremely elegant. 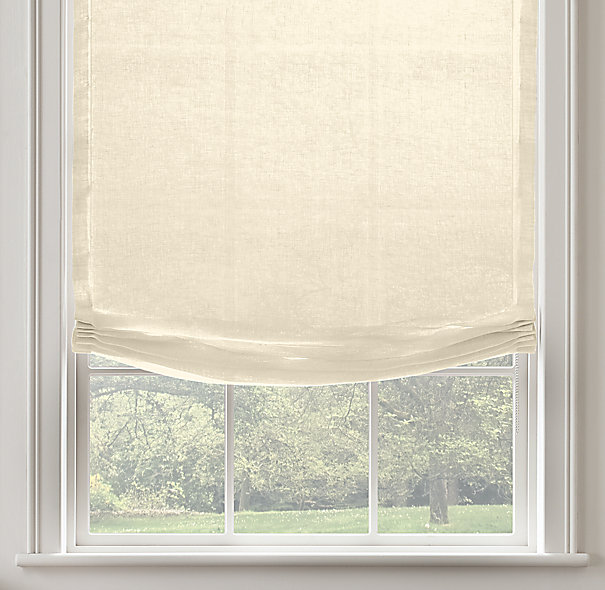 Hobbled or Soft Fold (I have also seen this style referred to as Teardrop)--This style of Roman shade is made of ripples of soft folds that fall on top of one another, giving the shade dimension and softness. I would advise judicious use of this style as it can look overblown or gaudy depending on material and location. 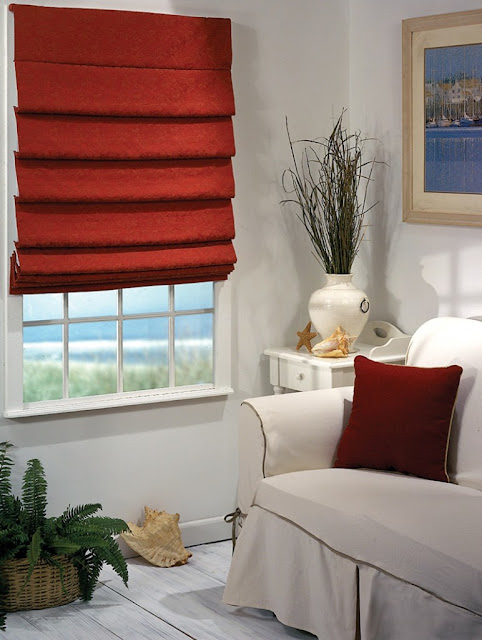 Knife or Ribbed (I have also seen this style referred to as Slatted)--For this Roman shade, dowels are sewn into pockets every eight to ten inches or so. They can be attached at the rear of the shade so the front has a seam, in which case it is called a Knife or Knife Edge Roman shade. If the dowel pockets are in the front (with seam in the rear), this is generally called a Ribbed Roman shade.


Happy designing!
Posted by Jeff Fiorito, Allied ASID at 7:00 AM No comments:

Frenchman Yves Klein (April 28 1928 – June 6 1962), member of the artistic movement of Nouveau réalisme/ Minimalist/ Performance Artist/ Pop Artist, at first seems an unlikely ally in interior design. Known mostly for his blue paintings and art works (in which he utilized the bodies of naked models as "paint brushes"), Klein actually invented a color with the help of Edouard Adam, a Parisian paint dealer. Klein and Adam discovered that if ultramarine pigment was suspended in a synthetic resin instead of linseed oil, as most pigments were at the time, the color became deeper and more vibrant. The hue to this day is called International Klein Blue.

In 1961, Klein made a sculptural conceptual art piece called Table bleue: a table of stainless steel legs supporting an acrylic box of the International Klein Blue pigment. The artist died of a series of heart attacks in 1962. But starting in 1963, the Yves Klein Estate in Paris has overseen the manufacture of these iconic tables ever since.

Below, we see one in the Manhattan loft of fashion photographer super-duo Inez van Lamsweerde and Vinoodh Matadin. 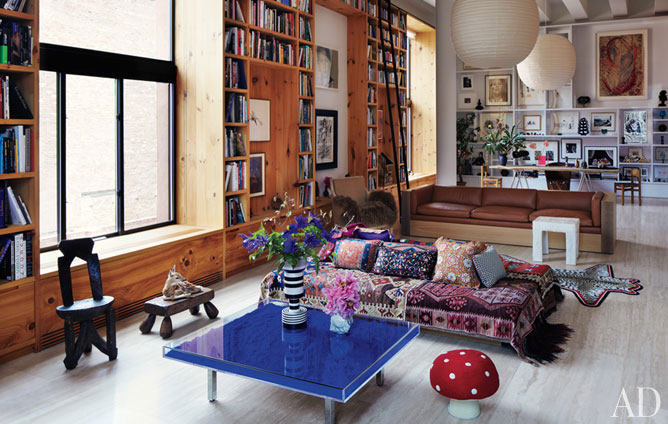 Here is the Klein Table bleue in the Hong Kong home of accessories designer Fiona Kotur. 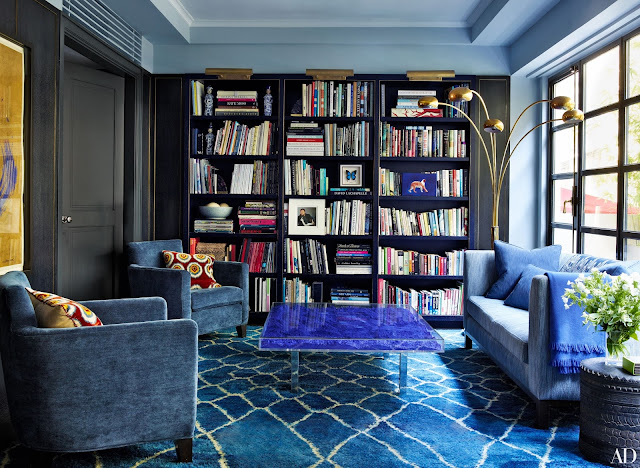 The dazzling IKB pigment shows up beautifully against the palm wood and brass inlaid walls and fireplace in this London Georgian home by Paolo Moschino for Nicholas Haslam. 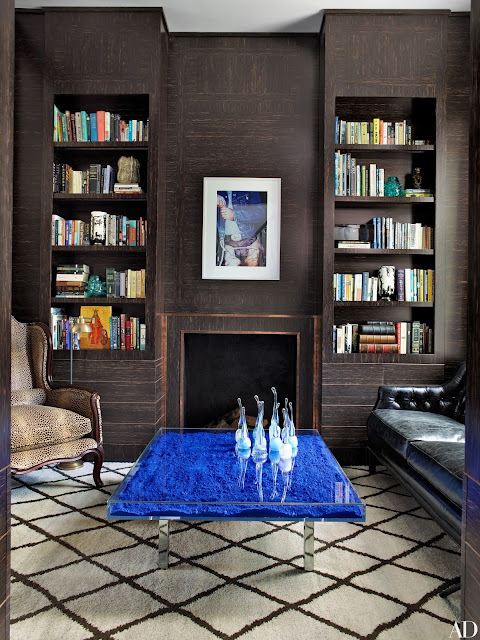 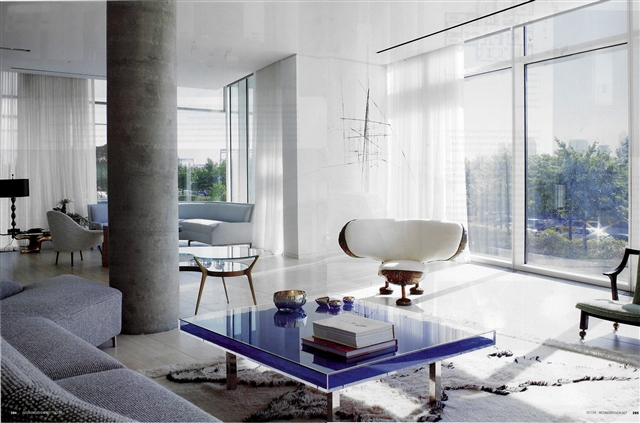 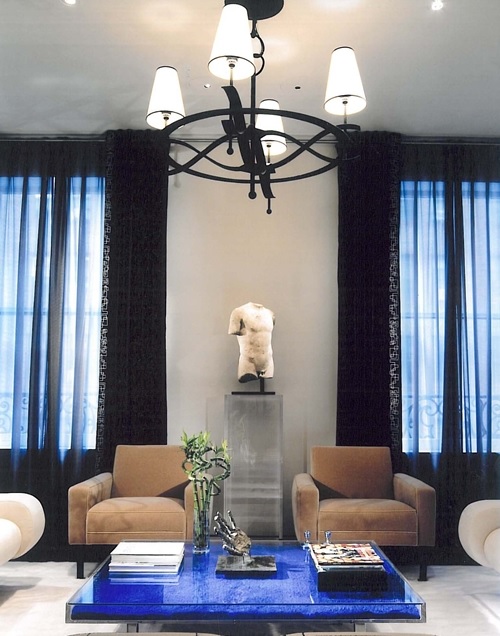 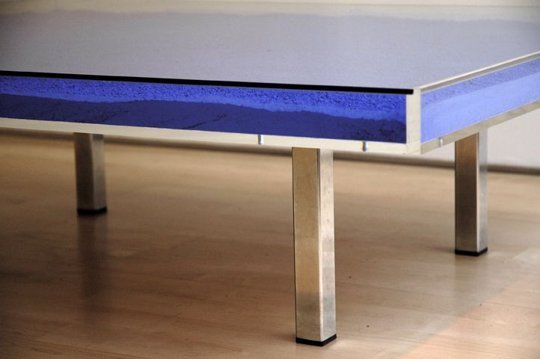 Authentic Yves Klein tables are available in the United States through Artware in New York
http://www.artwareeditions.com/Artware_Editions_Yves_Klein_Table_Bleue_p/kley01.htm
or in Paris through Galerie Omagh
http://www.galerieomagh.com/en/oeuvres/table-bleue-2/

Know Your Sofas: The Lawson

In terms of the history of furniture, the Lawson sofa is a relative latecomer. Created for American businessman, author, and tycoon Thomas W. Lawson at the turn of the 20th century, this sofa features a silhouette simpler than any of its predecessors. Reacting to the Rococo Revival insanity of the Victorians (previously seen here), Lawson wanted something simpler, with comfort in mind. But what was revolutionary about this sofa was the fact that it had loose back and seat cushions. This silhouette has remained intact to this day and the Lawson is pretty much the most popular sofa style. The arms which are lower than the back (unlike a Chesterfield, previously seen here) can come in different versions, like a wide or narrow track, or even a traditional rolled arm--but you will never see a pillowed or overstuffed arm on a Lawson. 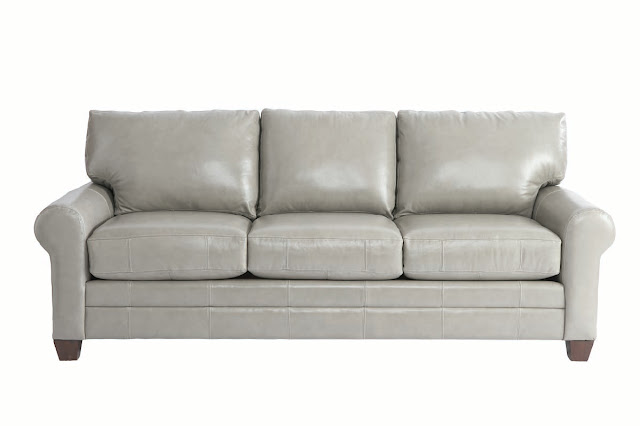 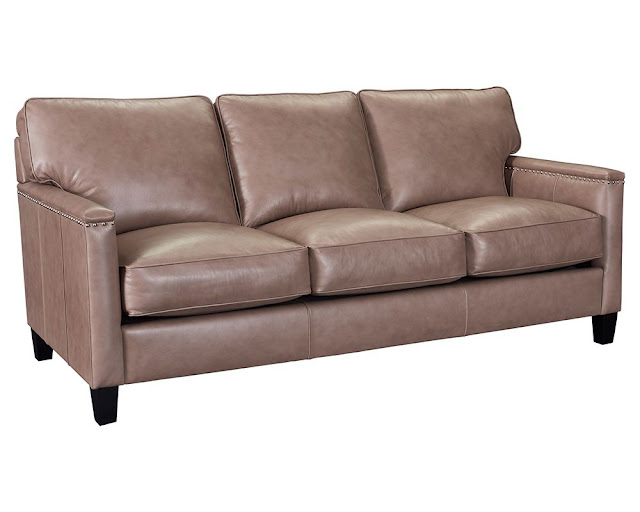 Since it is so neutral, there are a few details that can make a Lawson sofa stand out. The type of fabric chosen for upholstery can make the sofa seem sleek (fabrics with sheen or metallic thread) and modern (chenille and nubby fabrics in green tones can invoke a Mid-Century Modern feeling) or traditional (pastels or classic English cabbage rose chintz). A skirt at the bottom (which will hide the legs) can lend a more relaxed, cottage feeling. And finally, a nailhead detail can add some interest (shiny chrome nail heads on a black velvet sofa would make a dramatic, dressy statement!).

Happy Designing!
Posted by Jeff Fiorito, Allied ASID at 7:00 AM No comments: 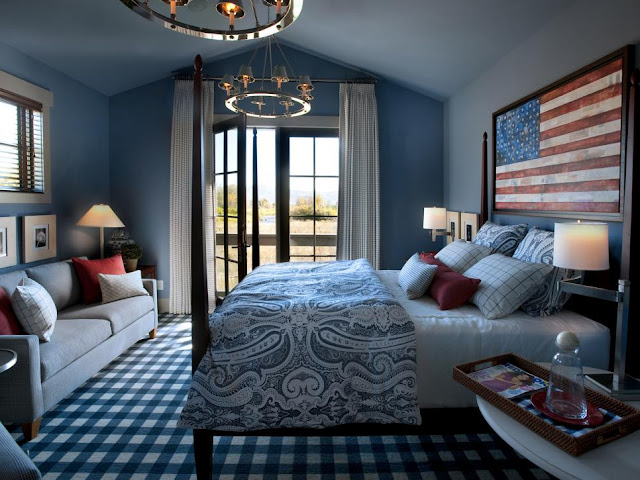 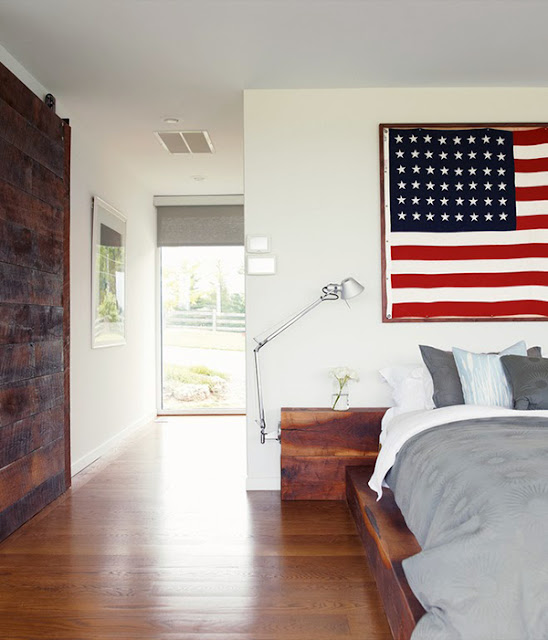 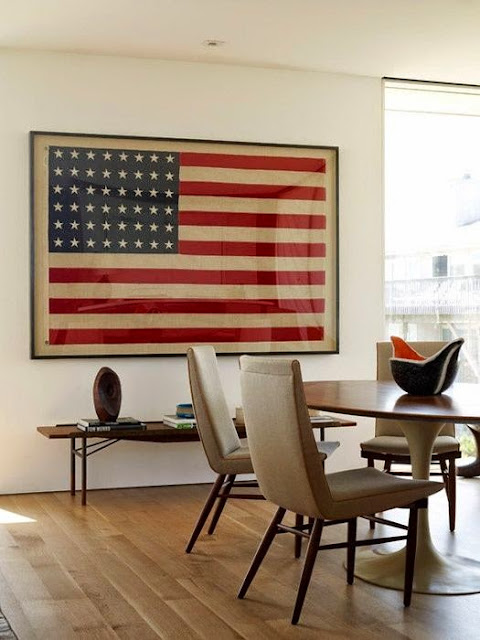 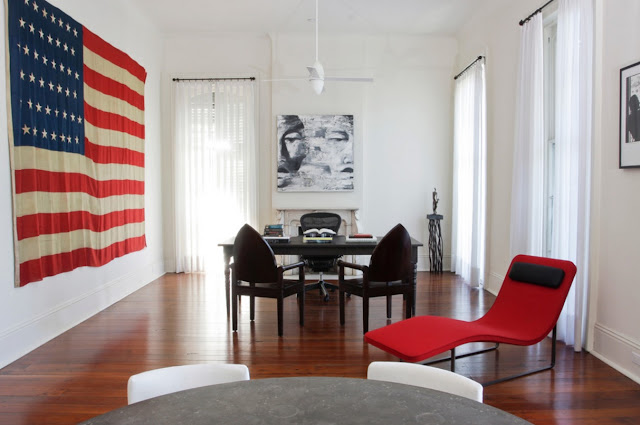 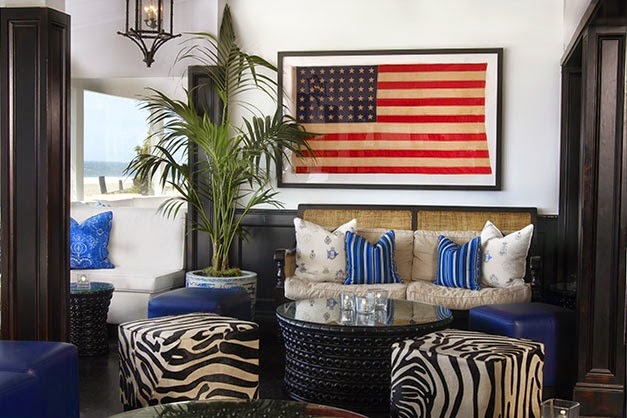 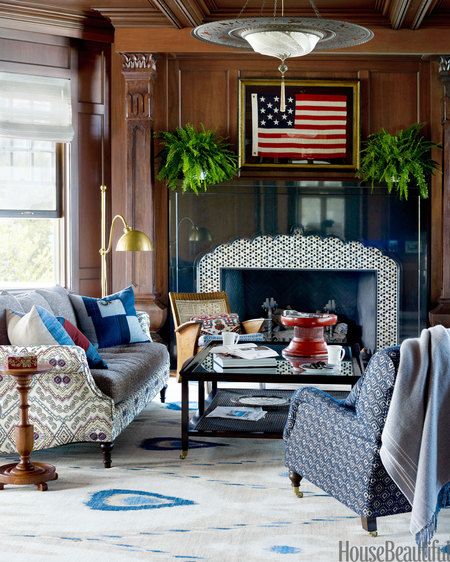 And happy designing!
Posted by Jeff Fiorito, Allied ASID at 7:00 AM No comments: