I will be celebrating World Interiors Day on May 31, 2014, sponsored by IFI (The International Federation of Interior Architects/ Designers). 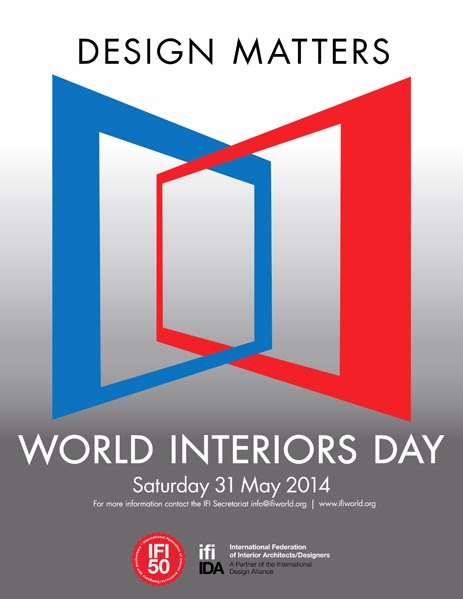 It might be a common perception that interior designers are only for the super-wealthy, but we are really for anyone wanting to improve their home in a quality manner using quality materials. Working with an interior designer can greatly improve the experience of your home, how you live in it, and ultimately the value of your space. Life is so much better if you love where you live!

In my own practice, I can help with any or all of these steps. If you have unlimited time and patience, you could tackle some of these yourself, but why bother when an educated, knowledgeable professional can save you time and heartache (and heartburn). But most importantly, an interior designer can save you money by helping you to avoid mistakes that would be costly to amend, fix, or do over, which is especially true with kitchen and bathroom remodels. It is not as easy as it looks on HGTV! Trust me.

I am an advocate for my clients, introducing them to products and materials that they might not otherwise know of. I can help to expand design sensibilities into new, exciting areas. And I can bring to the project advantageous relationships with vendors, suppliers, and tradespeople that clients normally would not have.

If you have been a fan of design but have never worked with an interior designer before, or if you have been thinking of perhaps working with an interior designer on a possible project in your home, or if you have started a project on your own but can't quite seem to finish it, I encourage you to contact me. I can help to greatly enhance your home and your life in it. My business motto is, "Shape your home, shape your surroundings, shape your life."

Click on my business logo to the right to see my website, my portfolio, and to contact me!
Happy designing!
Posted by Jeff Fiorito, Allied ASID at 8:00 AM No comments:

We suffered a fierce heat wave last week here in Northern California, and when the temperature reaches three digits, I dream of lounging in spare, cool, white spaces that promote a respite from the heat, like these...

I will be in the South of France this summer and we begin our trip by returning for a week to a friend's beautifully renovated farmhouse in Provence that looks a lot like this! We were there last year and it is stunning. I can't wait! 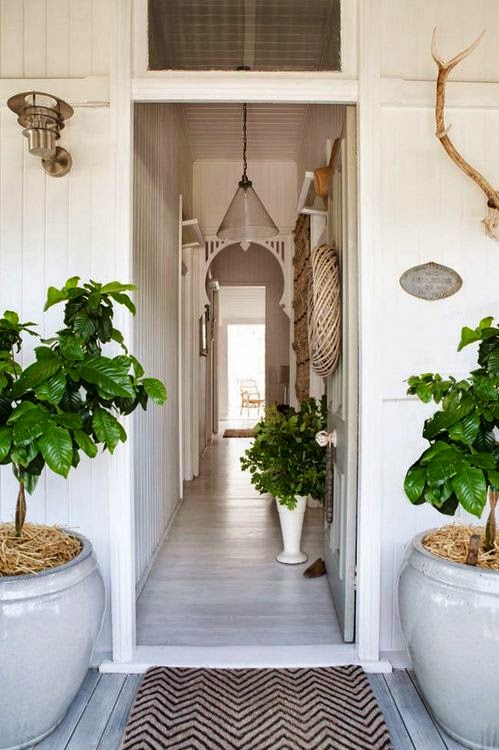 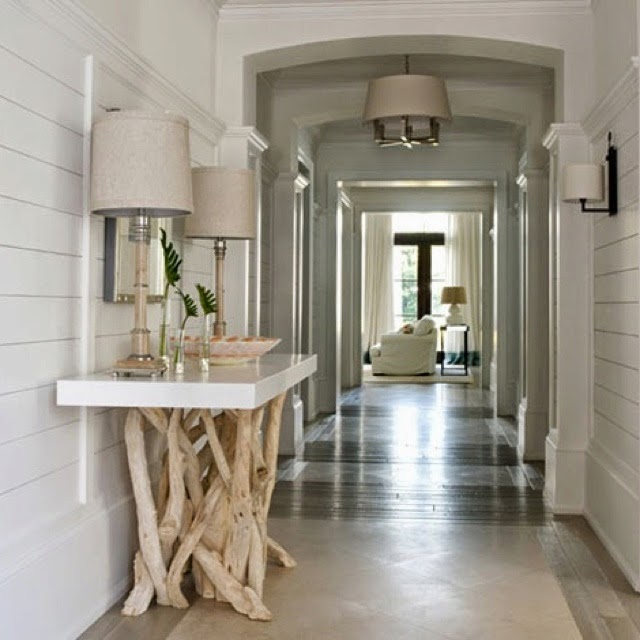 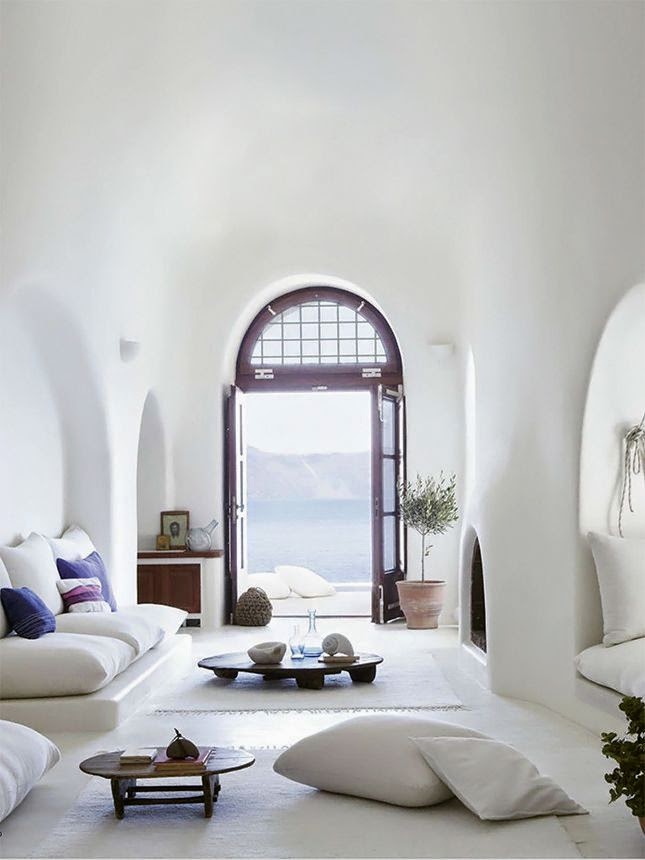 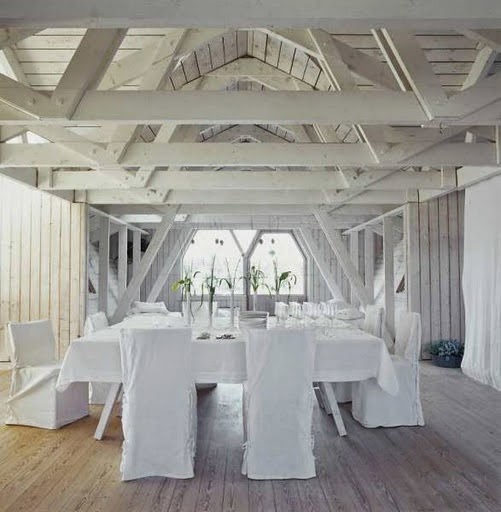 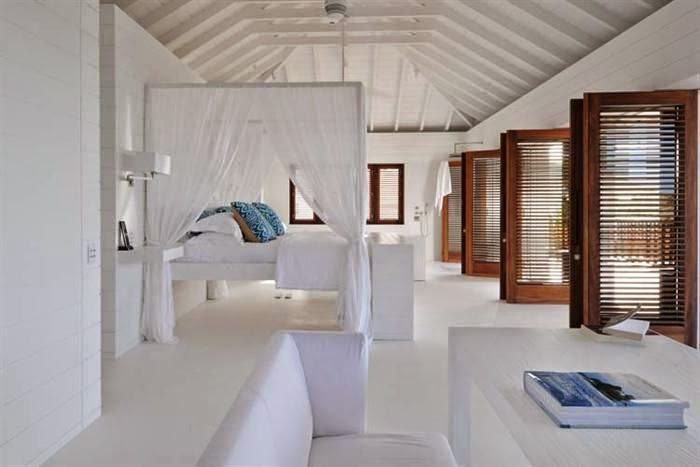 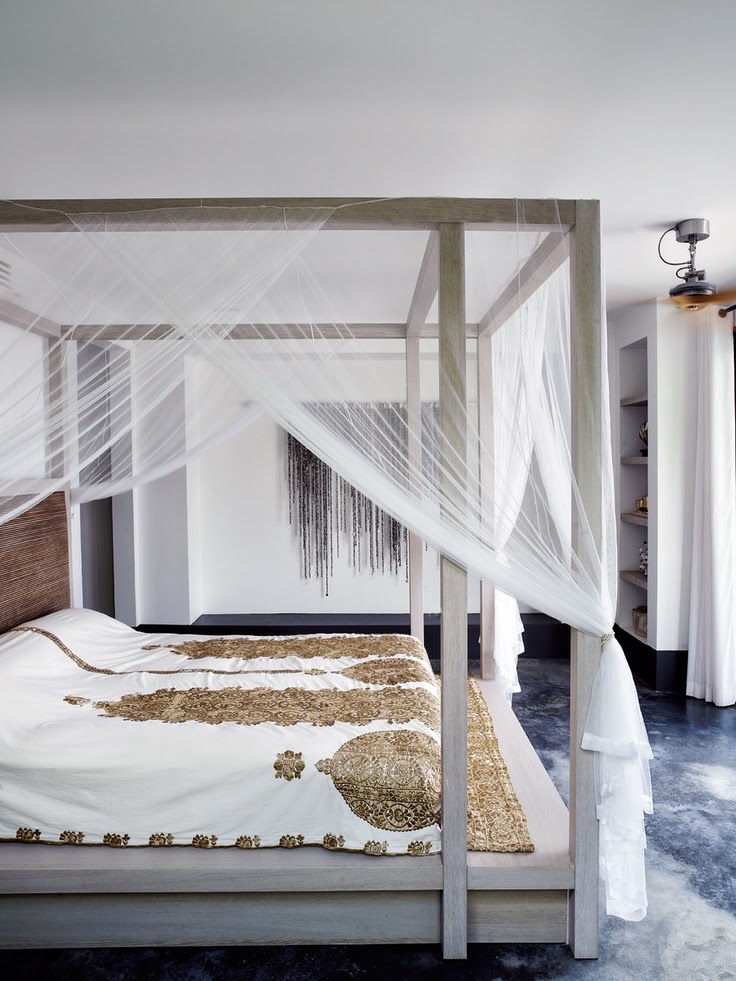 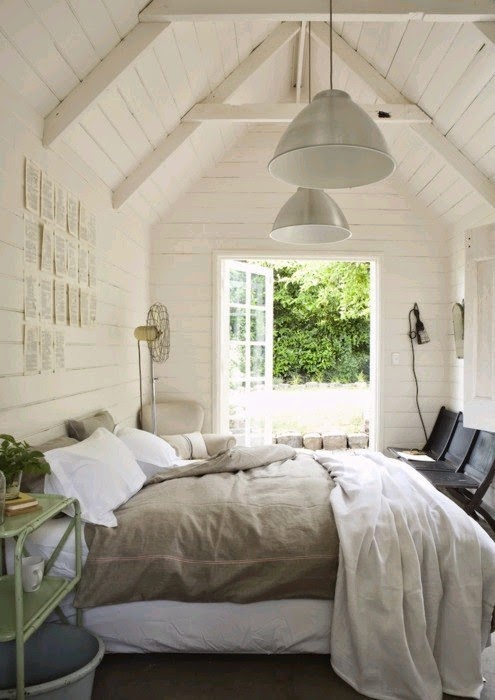 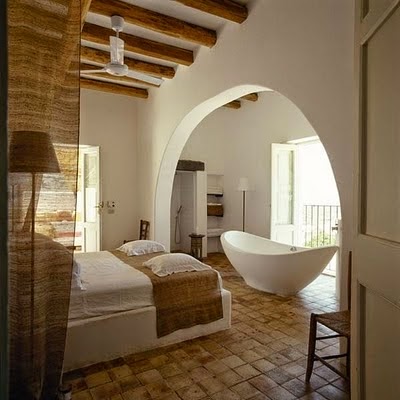 Posted by Jeff Fiorito, Allied ASID at 8:00 AM No comments:

Ever since I encountered them many years ago, I have been itching to use one of Adam Wallacavage's wild, fun, unique octopus chandeliers for a client who might want, say, a Captain Nemo dining room! 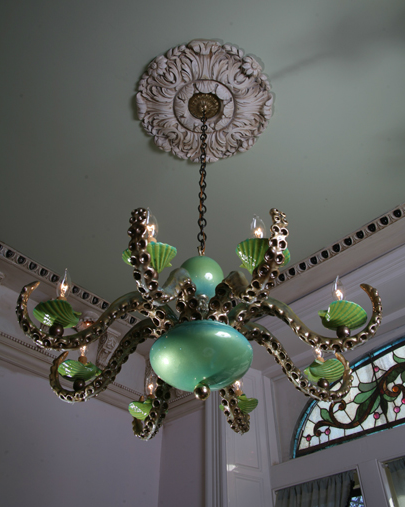 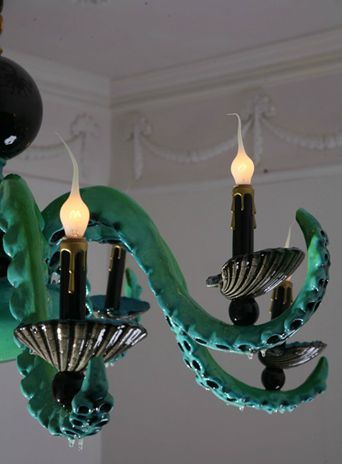 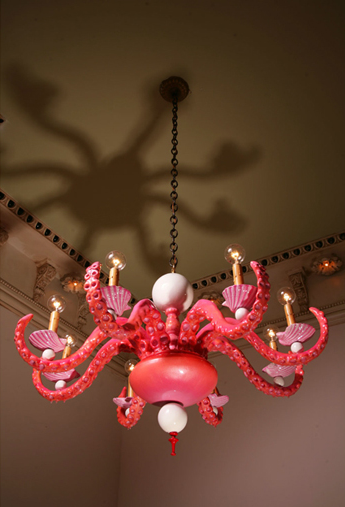 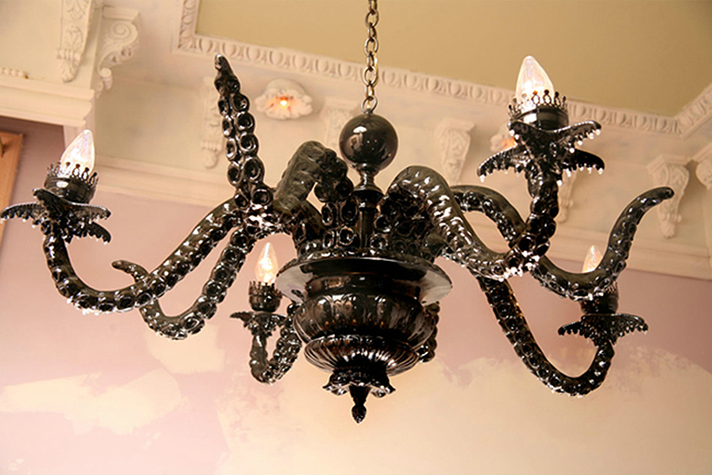 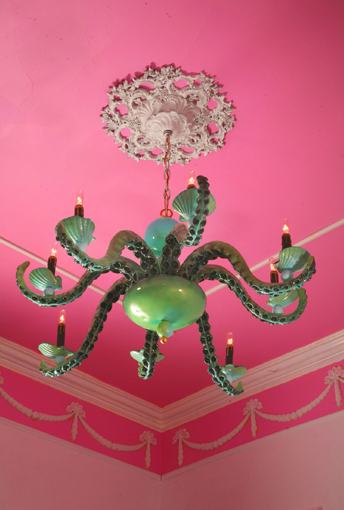 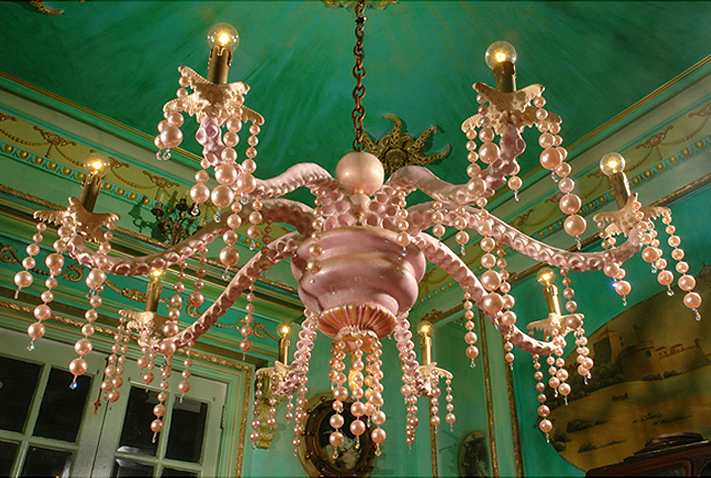 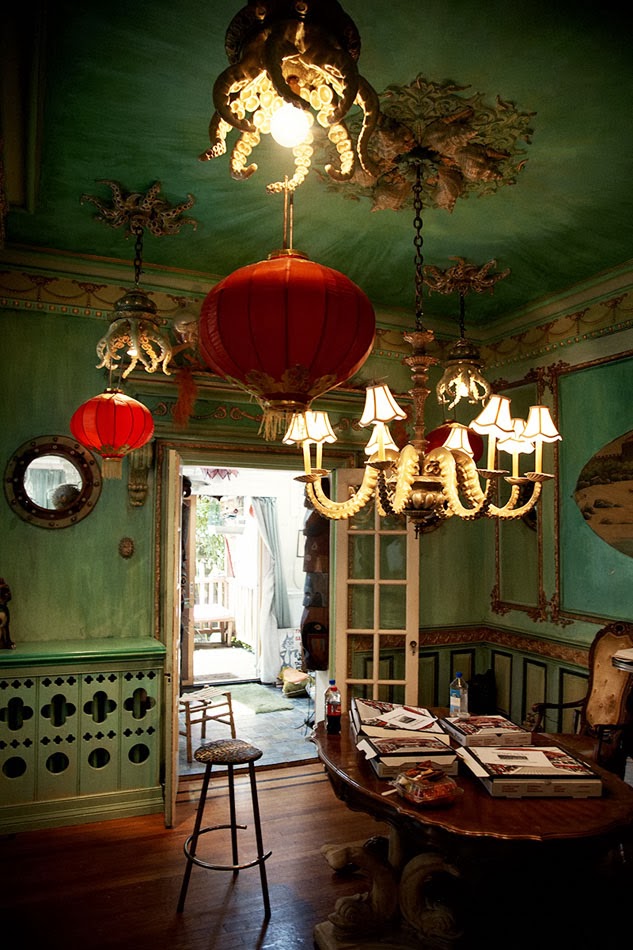 And here's one of Wallacavage's beauties in a living room by PAL + SMITH. I love it! 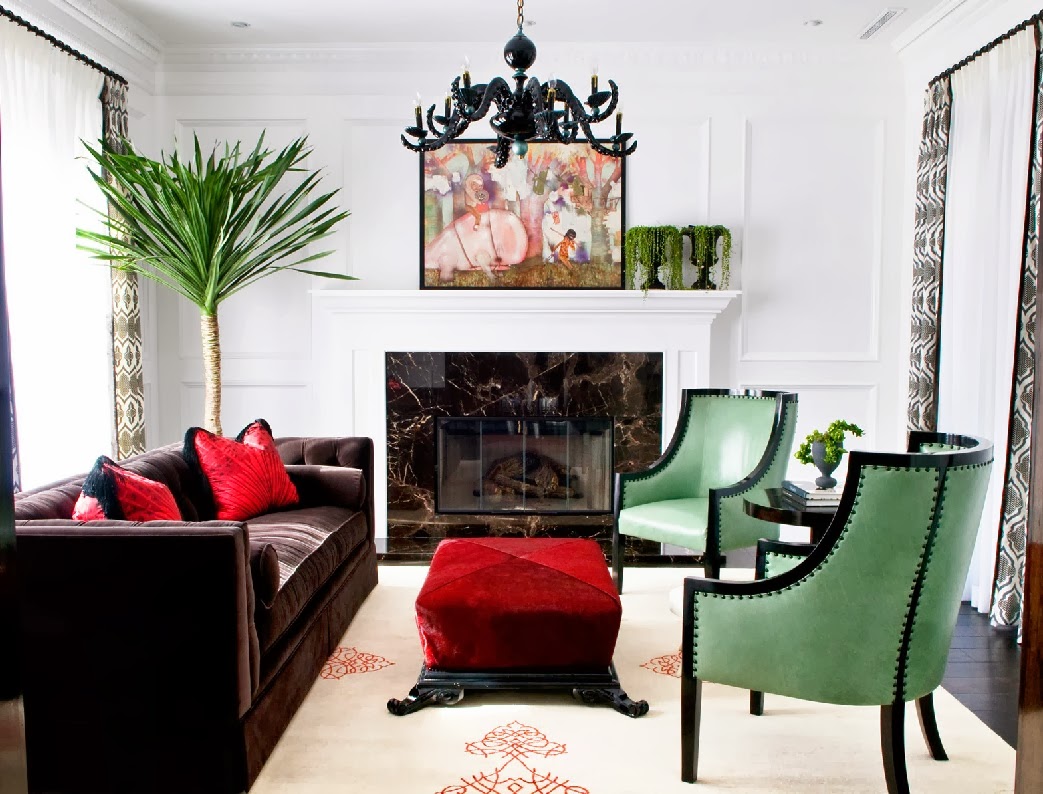 So if you would like a Captain Nemo dining room, or just a unique light for any room, give me a call!

During the late Middle Ages, or the Medieval period, which technically lasted from the 5th to the 15th centuries, there was a movement in art and architecture that saw an ornate sensibility unlike the heavy-handed architecture that came before it. This style did not have an identifying name at the time, but a hundred years later during the Renaissance it was dubbed "Gothic," an insult. The "Gothic" style was perceived as coming from an antiquated period when the world was under the tyranny of the church. The Renaissance of course was a rebirth and a period of secular progress, now that the superstitious stranglehold of the church had been broken. The Renaissance looked back and saw a "barbarous" and "unrefined" style that they traced back, in their understanding, to the Visigoths who sacked Rome in 410 A.C.E.

But in the late Middle Ages, the style actually had its origins in France where advances were being made in architecture. Instead of the typical Romanesque features of barrel vaulted ceilings and rounded arches, we can look back and see the development of flying buttresses and pointed arches for doors and window openings. This technological advance allowed windows to become larger, taller, and more open as opposed to the smaller openings necessitated by earlier heavy stone walls. Windows became decorated with tracery designs that included the trefoil (meaning three leaf), a figure with three overlapping rings. While there was also a cinqefoil (a design with five rings), the most popular proved to be the quatrefoil, with four symmetrically, and therefore pleasantly placed circles. This tracery is one of the hallmarks of what we now know as Gothic architecture, furniture, and art. Below we see tre-, quatre-, and cinquefoils (in French: trois = three, quatre = four, cinq = five) 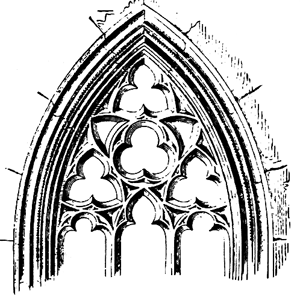 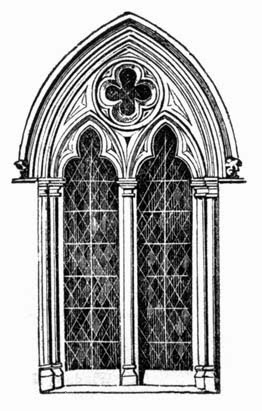 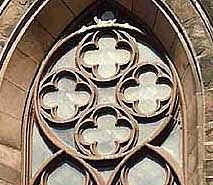 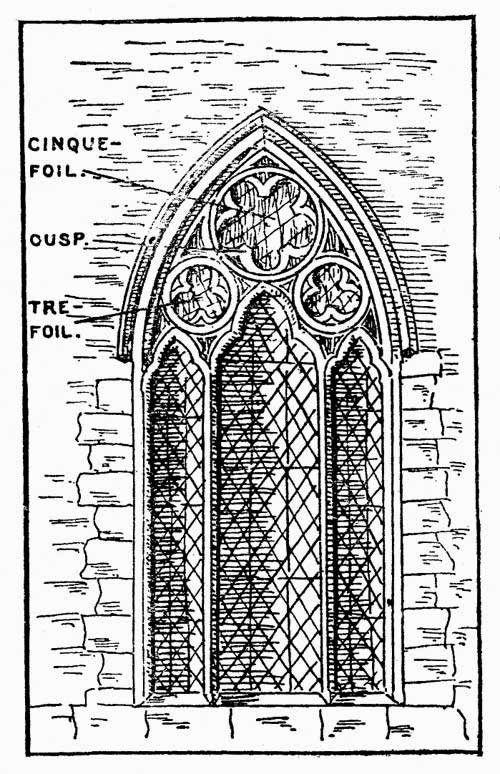 In terms of architecture, some of the best known Gothic buildings are Notre Dame de Paris, located on the Île de la Cité in Paris... 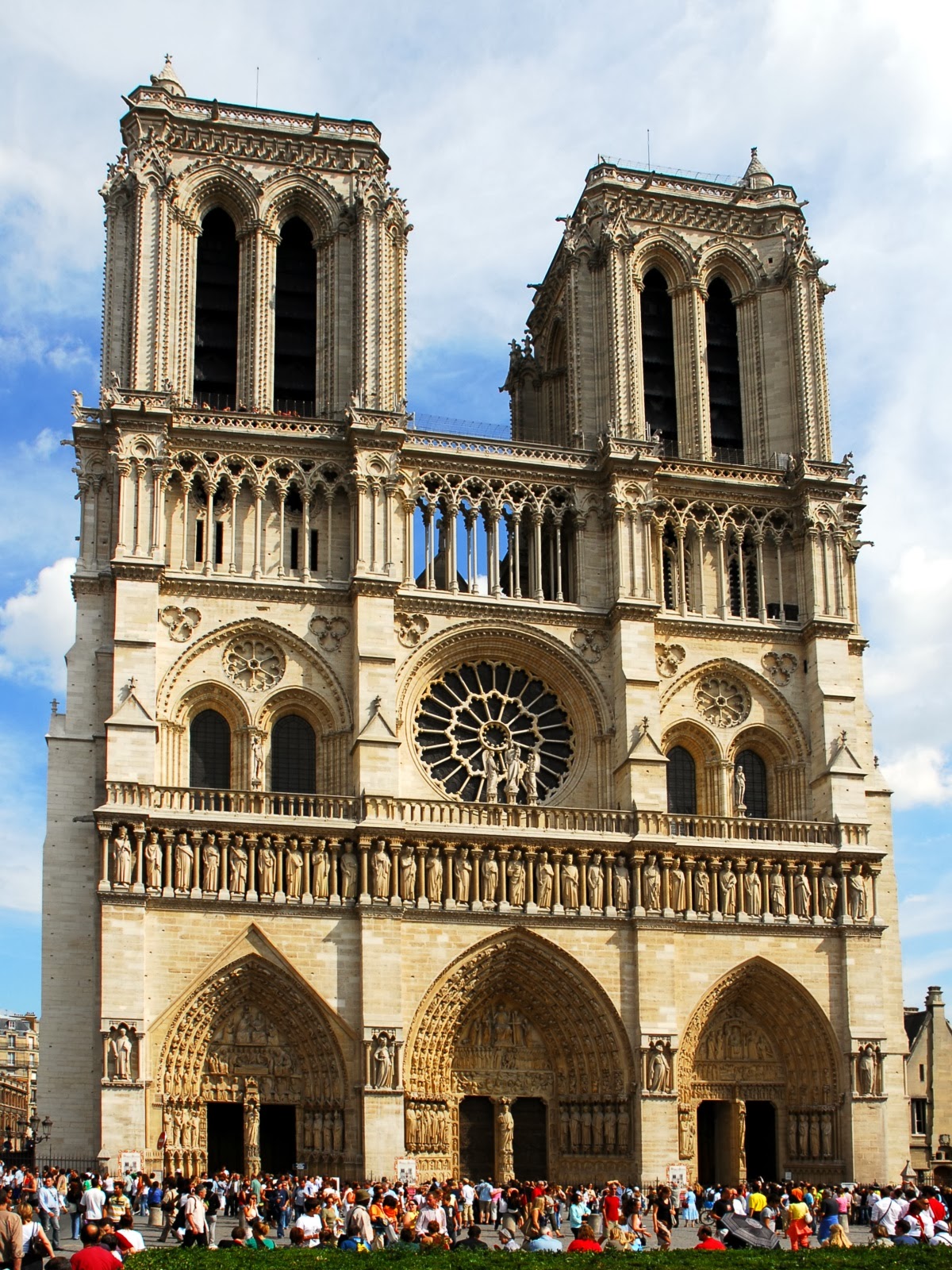 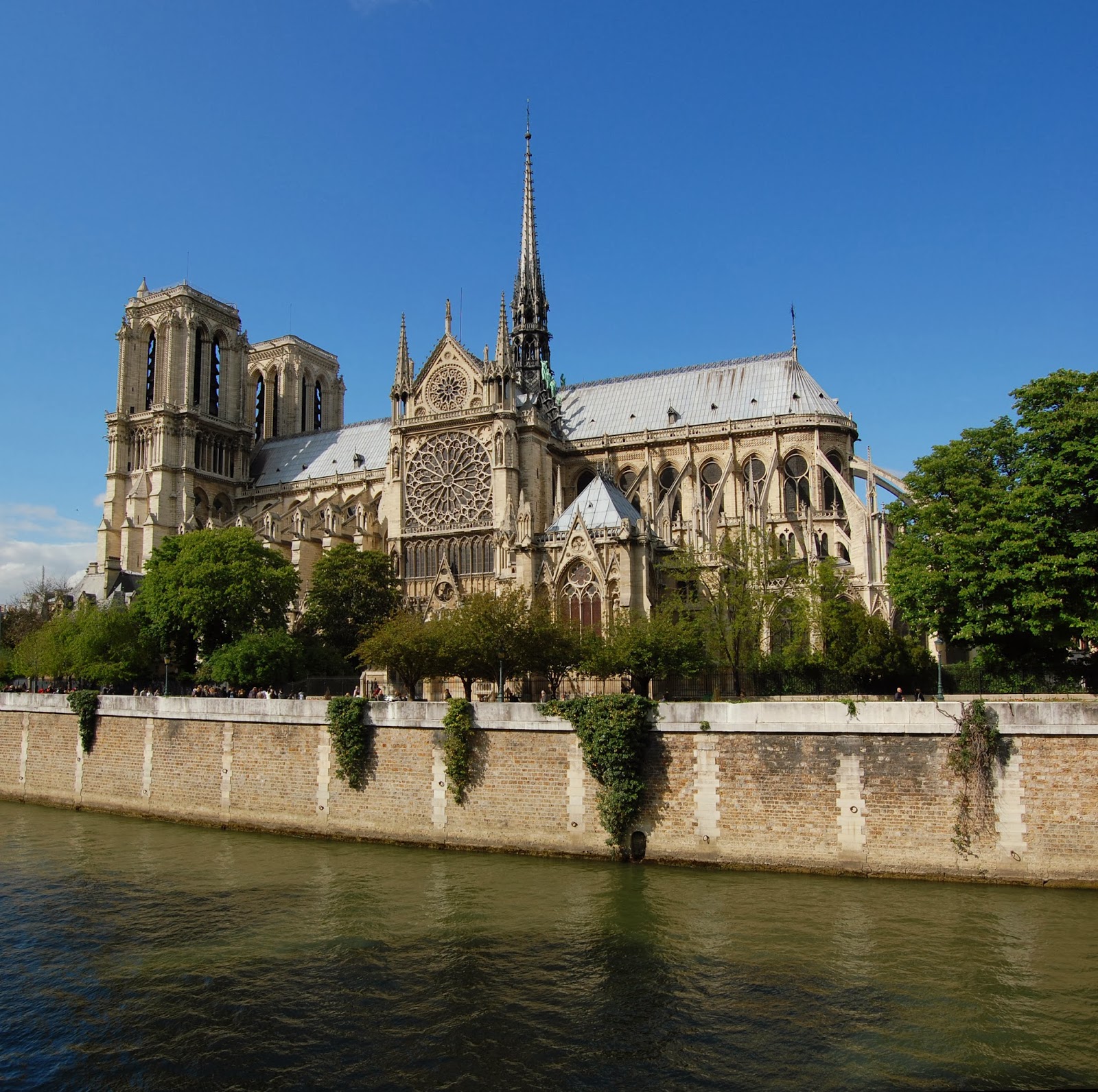 ...and Sainte Chapelle also on the Île de la Cité (at the opposite end of the island), seen below (notice how the extremely tall pointed windows create an almost entire wall of stained glass). 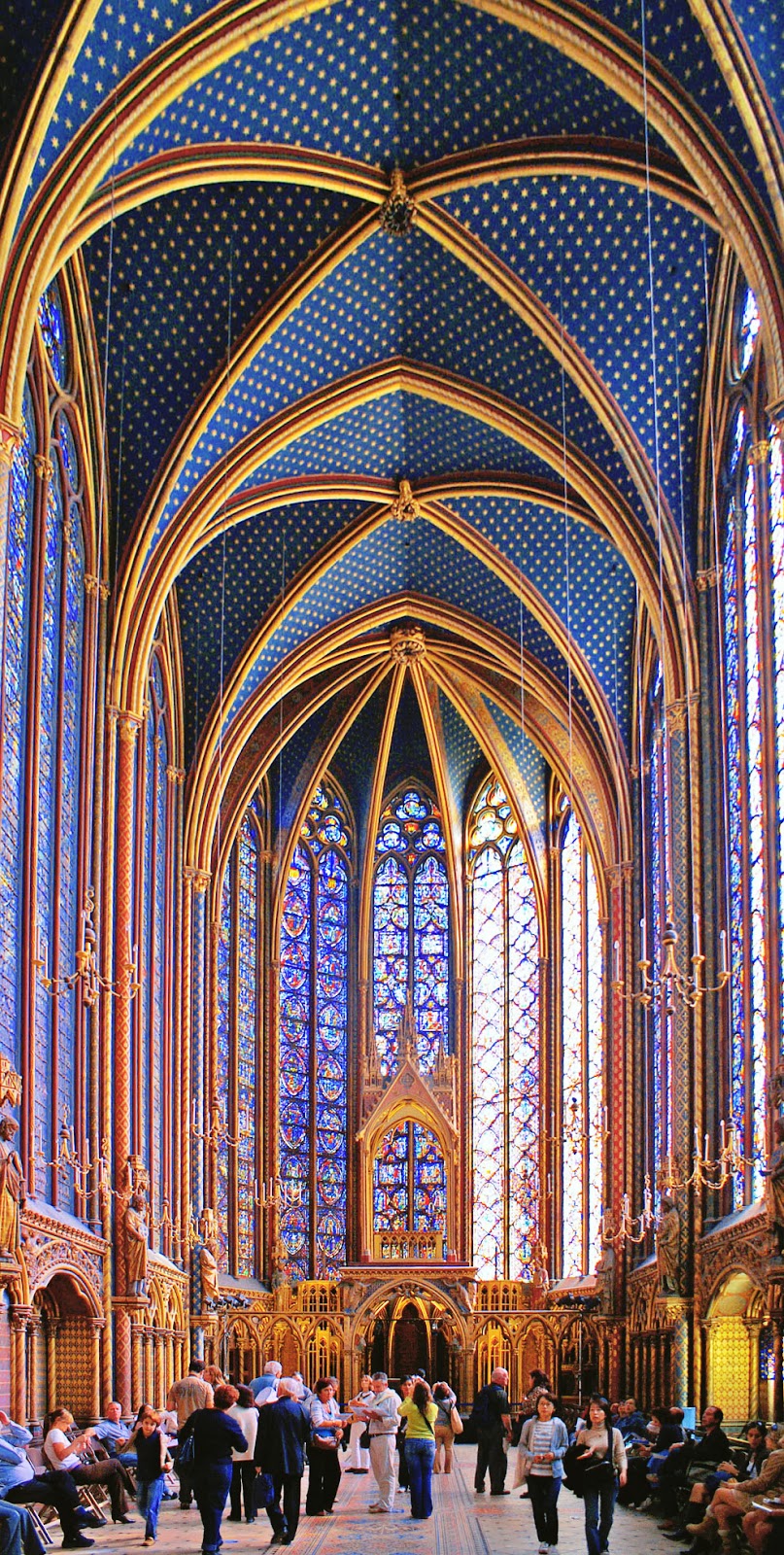 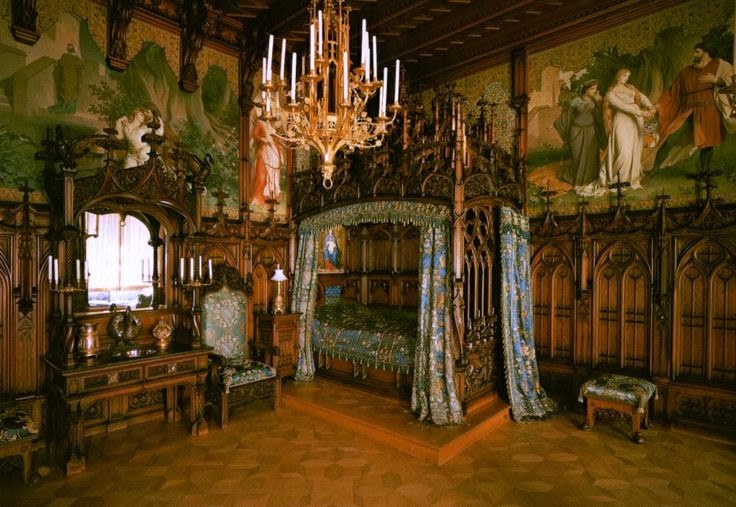 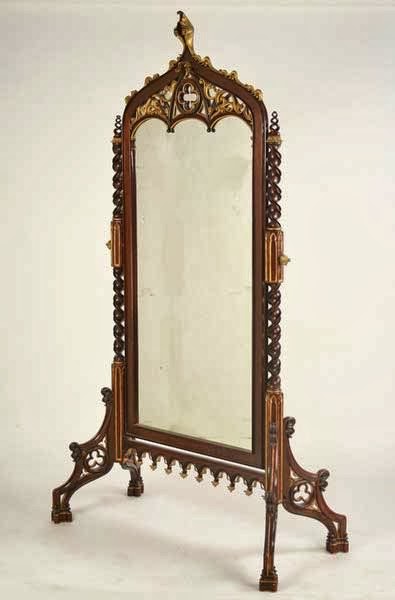 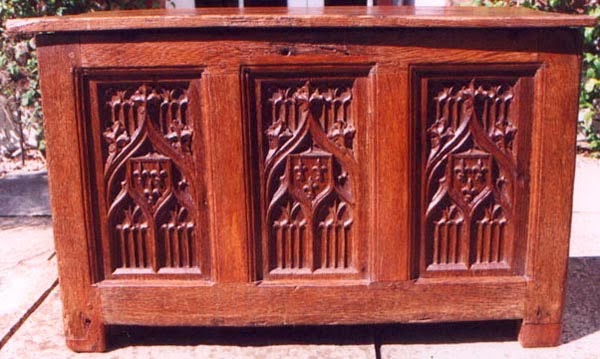 I create these History of Furniture posts not only to educate about interior styles, but to help take away the mystery about and confusion over antique furniture, and to help people feel confident in identifying pieces in the field. But I want to mention that when identifying pieces of Gothic furniture, what you will most often find are pieces from the Gothic Revival dating from the late 1700s, and into the 1800s. It would be rare for anyone to find an authentic piece of Medieval furniture...but even if you never do, you can still identify the style however you may encounter it.