In this series of blog postings about Legends of Interior Design, I would be remiss if I did not, at some point, mention groundbreaking designer and mother of the modern interior design profession, Elsie de Wolfe. 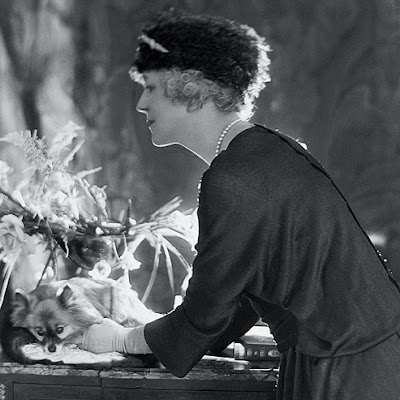 Born Ella Anderson de Wolfe in New York City in 1865 (although her Wiki page wonders if she was born in 1859), she was educated in Scotland and was even presented at court to Queen Victoria! Anecdotes from her childhood suggest that de Wolfe was headed for design greatness early on: in her autobiography AFTER ALL, de Wolfe recounts how she threw a temper tantrum when her mother redecorated a room with a heavy, dark, William Morris wallpaper, hurling herself to the ground, beating her hands on the floor, and crying out, "It's so ugly! It's so ugly!"

Upon returning to the United States, she participated in many amateur theatrical productions and through that circle she met Elisabeth “Bessie” Marbury, nearly a decade older. Marbury had already created for herself a successful career as a literary agent and theatrical manager, with Oscar Wilde and George Bernard Shaw among her clients. The two became lovers with Marbury encouraging and supporting de Wolfe in a career as a professional actress. Elsie de Wolfe loved couture fashion and the pair would regularly travel to Europe every summer to buy clothing collections from celebrated designers of the day (Elsie had it in her theatrical contracts that she would be allowed to wear her own couture clothing for stage productions, and her high-end fashions eclipsed her mediocre acting, making her a much-copied model for high society women in New York) and it is there that de Wolfe became enamored with 18th century design and French Louis XVI furniture and interiors. Considered gauche and passé at that time, this style was the exact opposite of the prevailing Victorian tastes of the day which relied upon heavy velvet drapery, dark moody interiors, and bloated ornate furniture. In contrast, de Wolfe was drawn to the delicate Neoclassical fluted legs of smaller framed chairs and settees, the light white and pastel colors, and a general sense of airiness.

Inspired, de Wolfe set out to banish the dark and heavy Victorian gloom of the Irving Place home she and Marbury shared. She had dark woodwork painted white, up came the patchwork of Persian rugs on the floor, and heavy velvet drapes were replaced wth light muslin curtains. This bright, light transformation was like a breath of fresh uncluttered air for all their society friends including Oscar Wilde, Sarah Bernhardt, Stanford White, and J.P. Morgan's daughter Anne. Below are before and after photos of de Wolfe and Marbury's dining room.

Based on that success, de Wolfe began getting requests from her friends to refresh their spaces as well but it wasn't until 1905 that de Wolfe became known as a true, professional interior designer--the first well-known interior designer in the world. Architect Stanford White was designing The Colony Club, a women's socialite club on Madison Avenue started by suffragettes, and brought de Wolfe in to design the interior spaces. At the time, her Trellis Room at The Colony Club, designed to give the illusion of an outdoor garden room complete with ivy on the walls, chintz fabric, wicker furniture, and lighting to mimic daytime, was a stunning achievement. 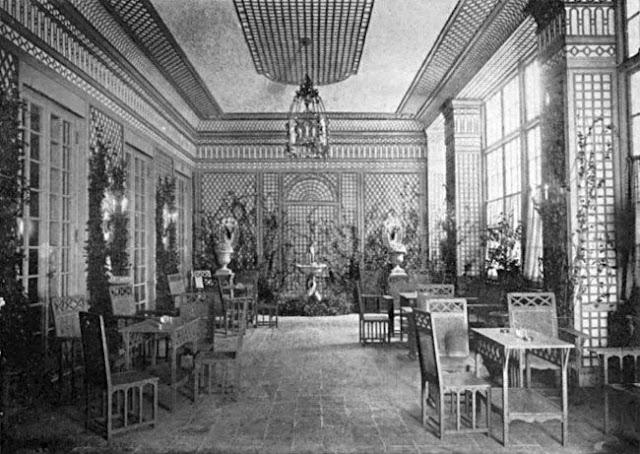 Thus a design legend was born, albeit accidentally. While the profession of interior design can be traced back as early as 1900, de Wolfe was first famous designer to make a name in the industry. For this reason, she is known as the mother of interior design. She was one of the forces responsible for moving tastes away from the Victorian (she once did an all-white room, quite radical for the time--and was the first to pair animal prints such as tiger stripes on French antiques!). She went on to design houses for some notable clients including Amy Vanderbilt, Anne Morgan, the Duke and Duchess of Windsor, Condé Nast, Paul-Louis Weiller, Cole Porter,and Henry Clay and Adelaide Frick (de Wolfe designed all the interiors at the Frick House which now houses the Frick Collection in Manhattan).

When she moved to Beverly Hills in the 1930s, she employed a young artist she had met at a dinner party to help with the design of her new home...a young man named Tony Duquette who later became an interior design legend himself. Stay tuned to hear all about him!

Ceramic vs. Porcelain: What's The Difference?

When I am designing a bathroom or kitchen for a client, I naturally specify tile as a finish material and clients often speak about ceramic or porcelain tiles. Many people use those words interchangeably but the truth is there is a difference.


Ceramic is a name for any material that is made from either white or red clay, then fired in a kiln and glazed. Porcelain tiles fall under the ceramic category but are generally more dense, harder, and most important, impervious to water. Therefore, all porcelain tiles are ceramic but ceramic tiles are not necessarily porcelain.


Because of its water-resistant nature, porcelain tiles are used in wet areas like bathrooms and areas that are prone to liquid spills like kitchens. And tile applications in outdoor areas certainly need the extra protection of porcelain tiles considering the constant exposure to the elements. In fact, to be called a porcelain tile, the body must not absorb more than 0.5% of moisture. This makes porcelain tiles virtually impervious to water. And what makes porcelain such a durable, hard material is that the clay is compressed and compacted under tremendous pressure and then fired at a higher temperature than ceramic (between 1,200 and 1,400 Celsius, or 2,100 to 2,500 Fahrenheit).


The strength of porcelain tiles also make it a good choice for kitchens--I tell clients if they drop a plate or glass, the chances of denting a wood floor or cracking a ceramic floor is greater than if they have a porcelain material. Porcelain is naturally tougher, more scratch resistant, more durable, and more resistant to stains. And if you choose what is called a through-colored porcelain tile--a tile whose body matches the color of the glaze on top--any small chips or nicks will be unnoticeable!

River stones inspired the new Abstract series of LED lights by Sonneman. The organically shaped white metal panels diffuse the light, making these fixtures intriguing additions to any space. They are modern but their simplicity would allow them to fit into transitional or even traditional design schemes. And the sinuous lines speak to the natural world, something that is making its way into our homes more and more with biophilic design.

“Driven to discover new insight and to test boundaries, our creative process achieved a new wave of sculptural expression,” says founder Robert Sonneman. “In our pursuit of technology-driven design, we took functional decorative to a fresh aesthetic with new forms and materials.”

The Abstract Rhythms series comes in different sizes and configurations... 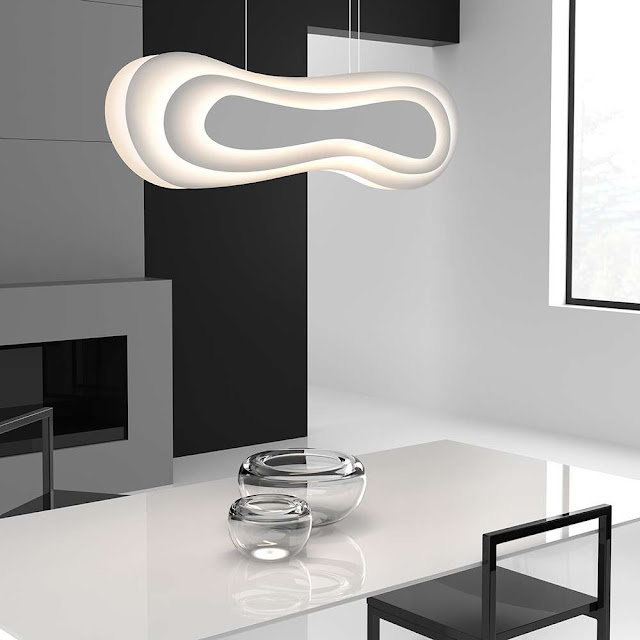 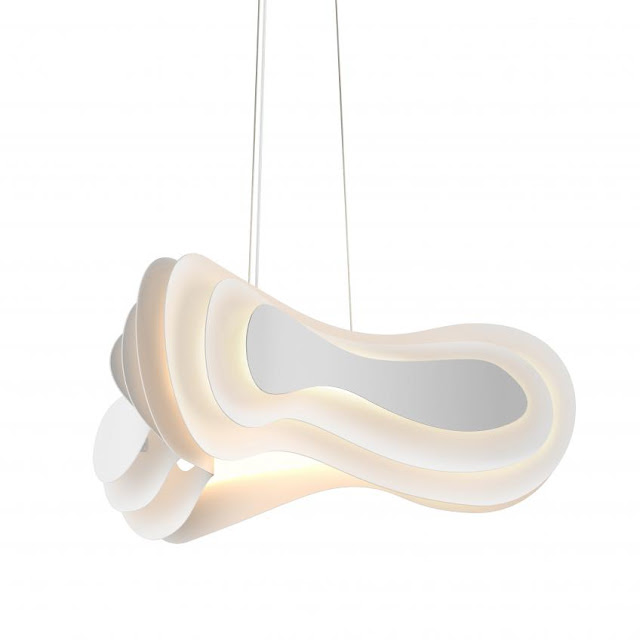 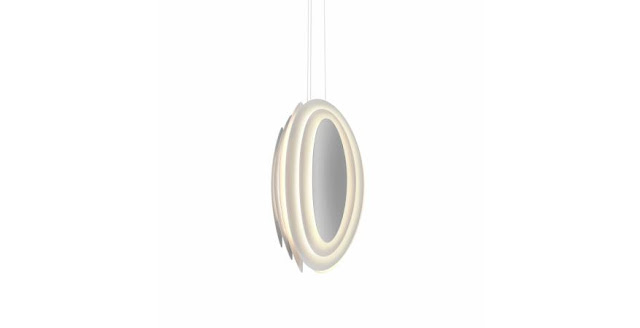 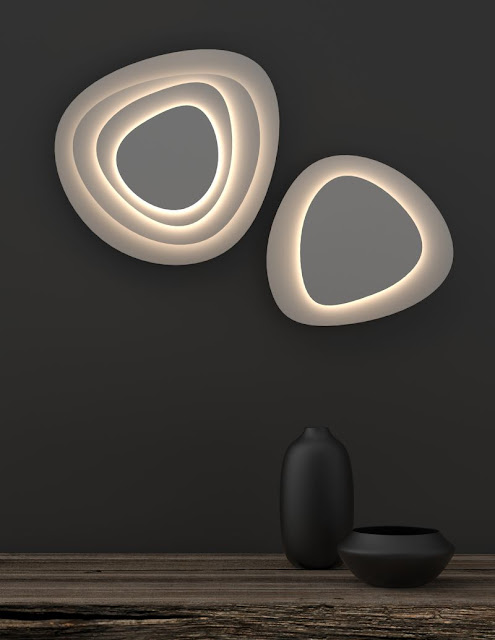 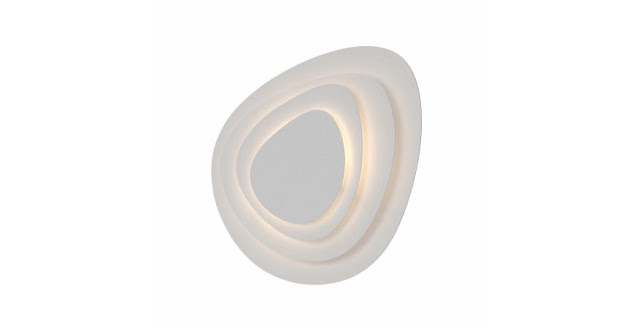 After living with the average master bathroom designed by the development company of their condo, my clients decided they had had enough. Longing for something sleeker, more modern, and with some style and flair, they hired me to create a space that would feel welcoming but unique. At their request, we removed a rarely-used bath tub and replaced it, as well as the adjacent small standing shower, with a much more spacious wet area. A vanity better sized for the room with undermount sinks makes the counter area seem roomier as well. New LED light fixtures, and mirrors outlined in oil-rubbed bronze to coordinate with the faucets, shower hardware, and vanity handles and towel bars bring a crisp, clean-lined sense. A deep, moody color on the walls and a fascinating, mineral-like wallpaper in the water closet serve to make this new master bath feel like a suite in a dramatic, contemporary hotel, the kind you might see in New York or London. 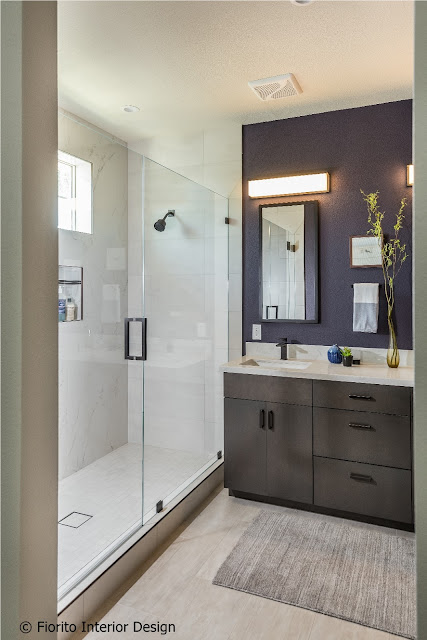 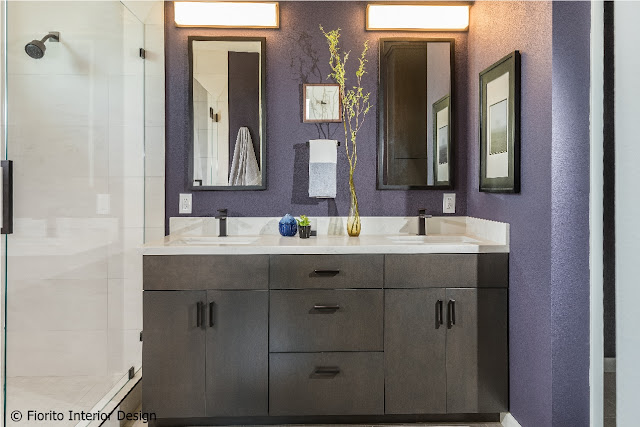 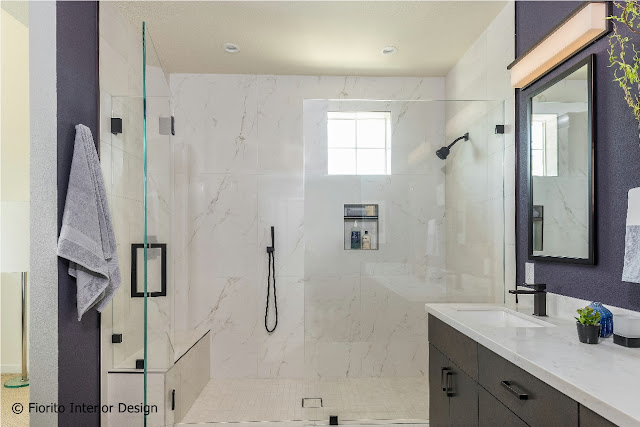 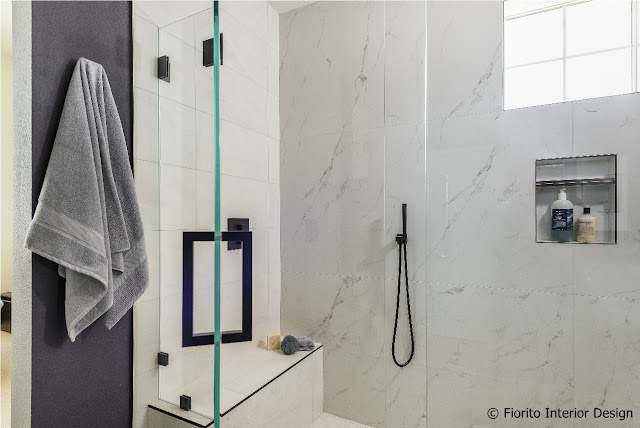 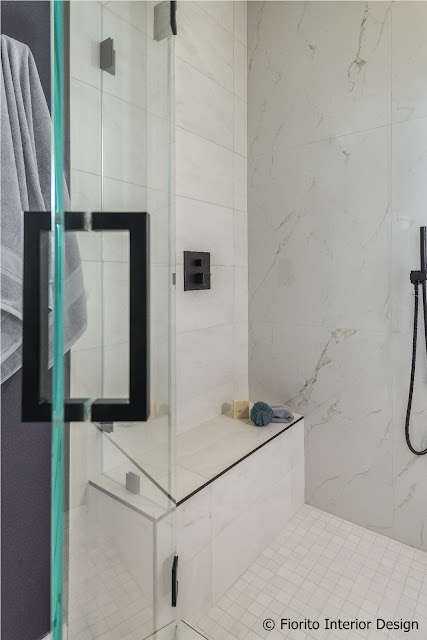 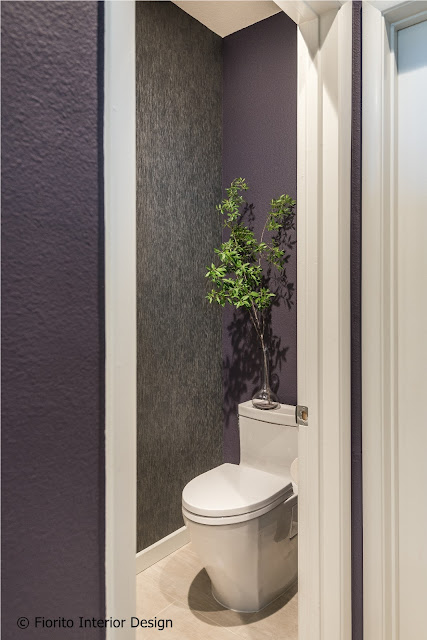 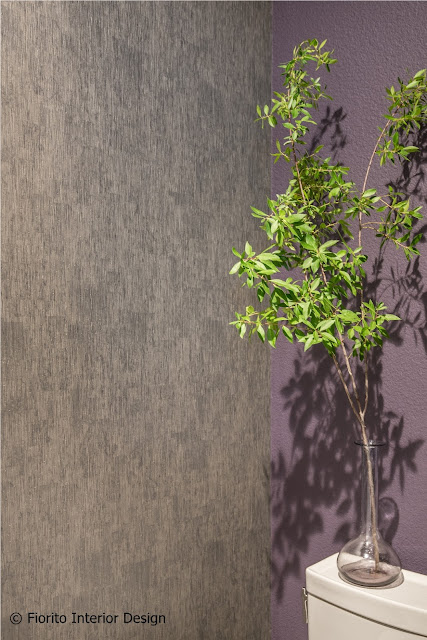 All after photos by Bernardo Grijalva

And all that from an average, builder's bathroom: 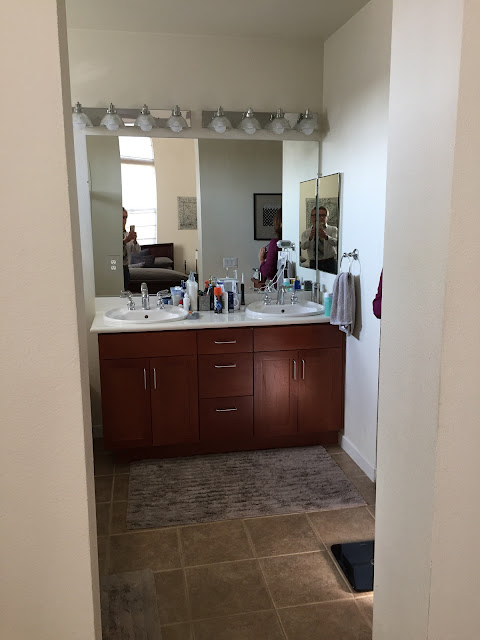 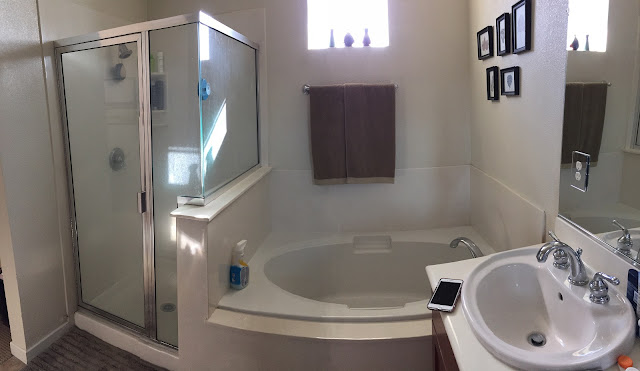 If you have a bathroom in need of some modernization, contact me!
Happy designing!
Posted by Jeff Fiorito, Allied ASID at 7:00 AM No comments: