At first glance, this installation of History of Furniture might seem to be not much about furniture at all, but stay with me. Like everything else that exists on this planet, furniture has evolved and grown over time. We did not always have a "sofa" or a "chair" to sit on. At various times throughout history and in different cultures, homes may have contained an array of objects which might not seem familiar or comfortable to our 21st century sensibilities. 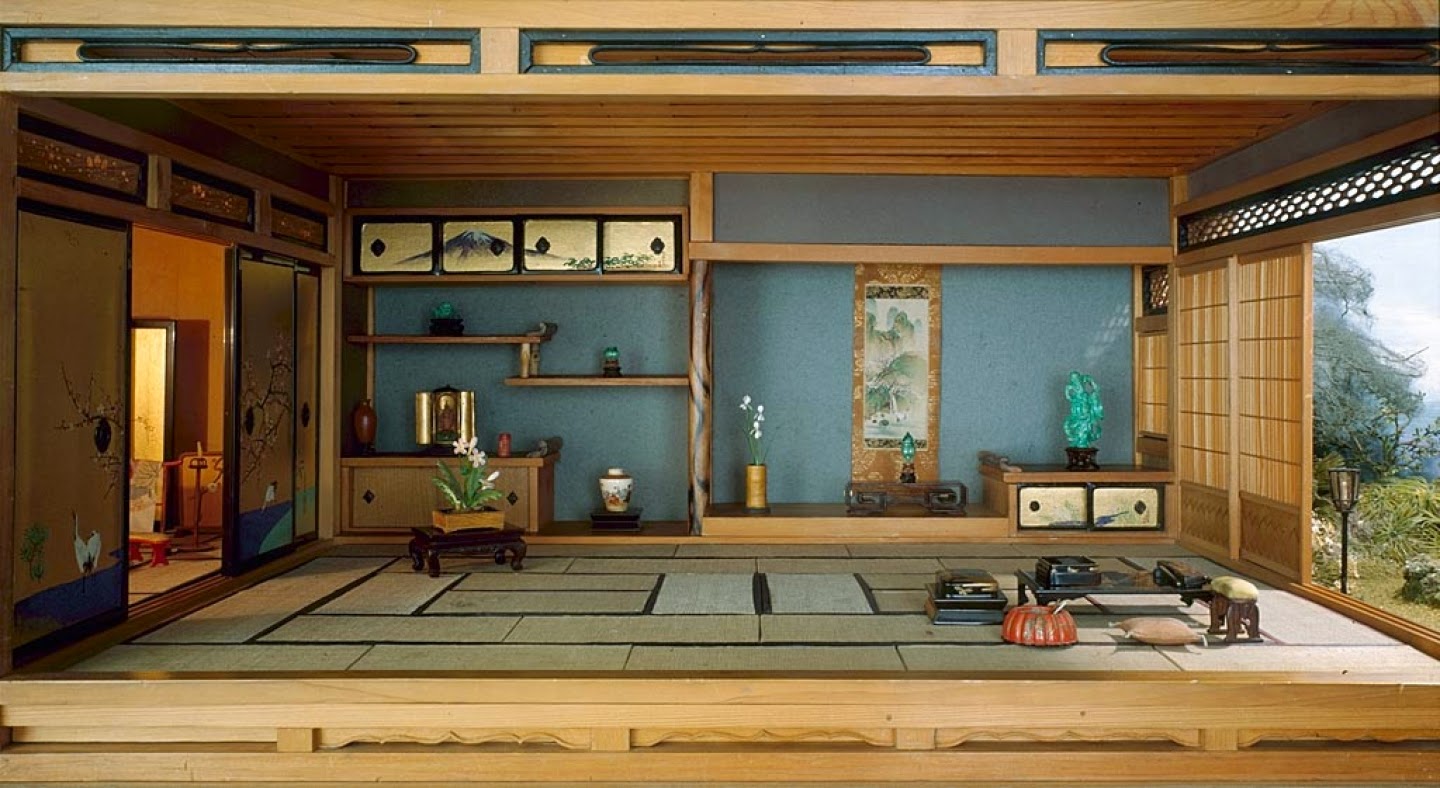 This might be the case with the interiors of ancient Japan. Interestingly, in both ancient and contemporary traditional Japanese culture, the floor is really the place to sit or sleep. Notice that furniture seating is conspicuously absent in the beautiful room above (the only furniture pieces are low tables for eating, writing, or display). Japanese interiors were furnished with a type of woven straw floor mat called tatami. These mats were finished on the edges and could be laid in different configurations to adapt to the shifting dimensions of the rooms which could be adjusted using sliding shoji screens. Then, as now, shoes were left outside before entering a home. In this way, the tatami mats remained clean for sitting and sleeping.

The concept of ma, or of negative space, and the simplicity inherent in the Zen belief system both shaped the way the Japanese approached interiors... and indeed nearly every element of their lives. Notice how there is a tremendous amount of open space, or interval between objects in the room above. Psychologically and spiritually, this allows space for the imagination, for living, for an actuality that goes beyond simply a person in a space. This attention to ma was, and to a great degree still is, an integral part of life in Japan. Notice the long and large inset niche in the wall below... it is meant simply to hold a sumi (a special Japanese black ink) calligraphic scroll or perhaps a painting on silk, and a small seasonal ikebana floral arrangement. This follows the Japanese idea of awareness and contemplation induced by certain objects. 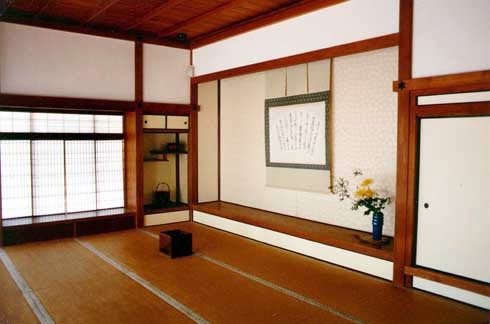 Another very important aspect of Japanese interiors was and is the idea of inside and outside and the symbiotic relationship between the two. I mentioned that shoji screens are used to close off rooms. But the converse is true as well: shoji screens are used to open up rooms to each other or to walkways and views beyond, linking rooms and linking nature to the rest of the house. The Zen rock garden is a vital feature, one that exemplifies all the ideas we have been discussing: ma or empty space, objects that stimulate awareness or contemplation, and a connection to nature. Rock gardens are meant to look like mountains rising out of fog or islands in a sea. The asymmetrical arrangement of varied and unusually shaped rocks is an example of the Japanese concept of wabi-sabi, or the idea that imperfection and the randomness found in nature instead of imposed uniformity is what creates true beauty. 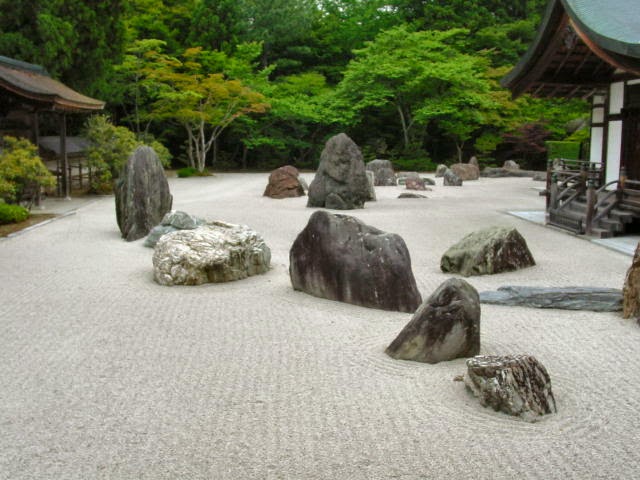 Above: A view of the rock garden at Koyasan, a Buddhist monastery. 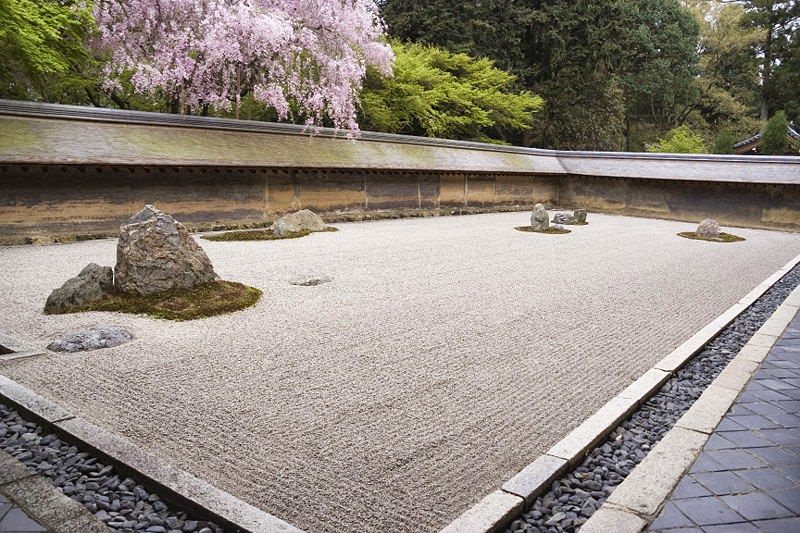 Above: Ryoan-ji, a Zen temple in Kyoto, features one of the most abstract rock gardens in Japan.

Despite all this talk of space and an absence of furniture, there were indeed wooden pieces of furniture. In addition to small, low tables that could be used as Buddhist prayer tables or to hold smaller altars... 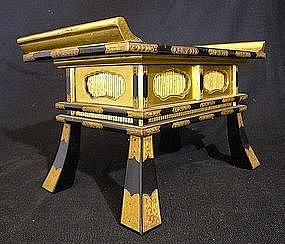 ...there were the altars themselves. More modest homes naturally possessed modest altars but wealthy homes boasted large, intricate, and gilt-covered altars large enough to stand on their own. 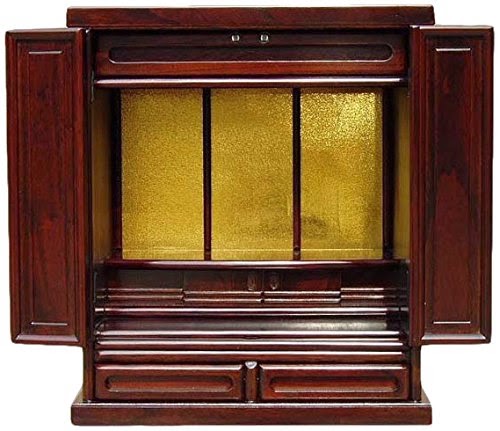 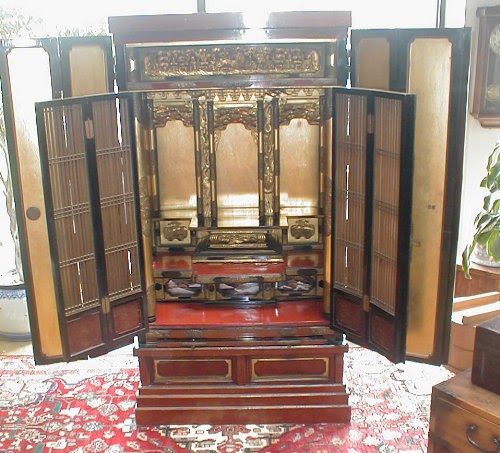 And of course any household in any period needed--and we still need!--storage. The earliest examples of Japanese storage pieces show up in the 8th century in the form of wooden chests called tansu. These chests were often plain but could be covered with iron strapping or decorative iron work. Another common feature: handles on the sides so the piece could be moved out of the house quickly in case of fire (which unfortunately happened frequently with homes being made of wood and rice paper). 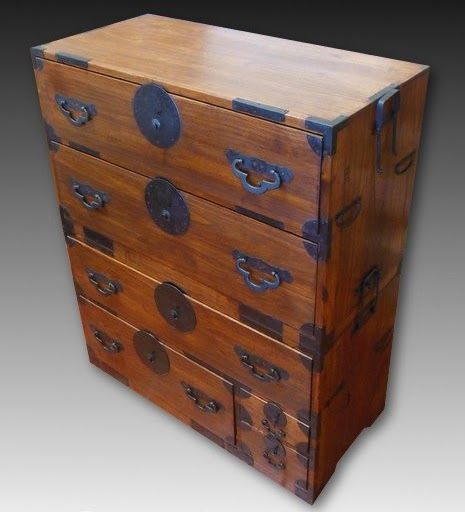 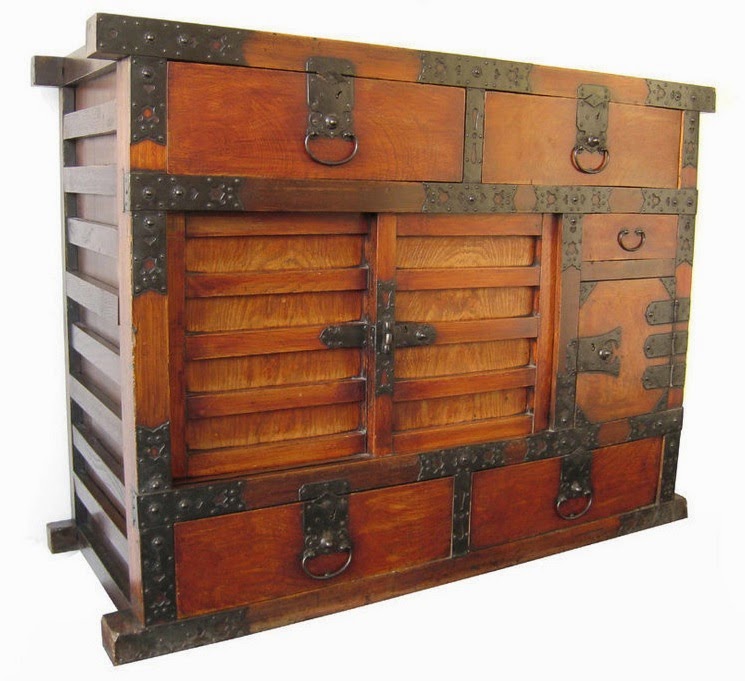 A variation of the tansu is the mizuya, or kitchen storage chest. This held any and all kitchen objects behind convenient sliding doors. 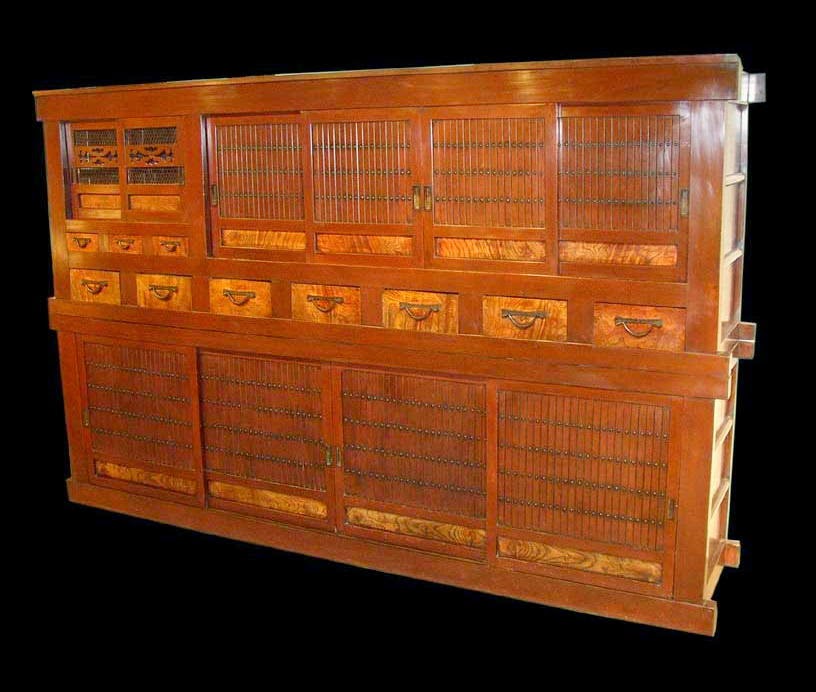 A very popular variation on the tansu is the kaidan tansu or step tansu which looks--and functions--like a staircase. It first appeared in the 1700s. 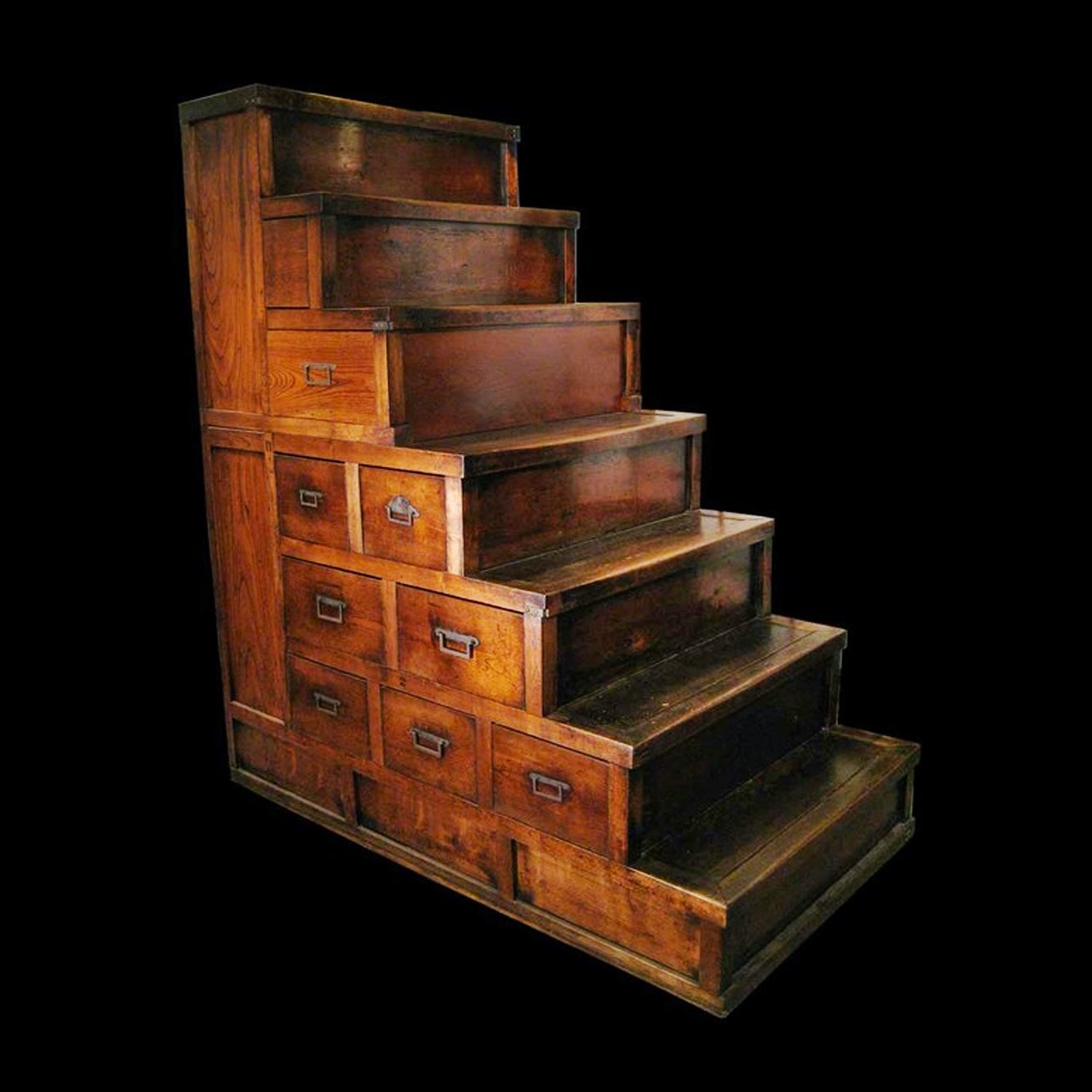 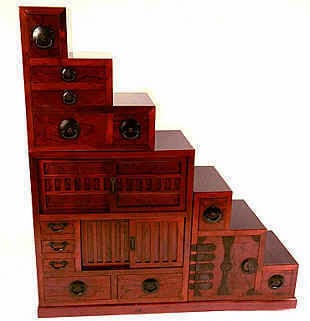 When looking for actual Japanese antiques, keep in mind that not much has survived before the Edo period. Such items are rare and quite expensive. What you will find will be pieces from the Edo period (1603-1867) but more likely from the Meiji (1868-1912) or Taisho (1912-1926) eras.