I recently attended, as I do every year, the San Francisco Decorator's Showcase which takes place at a different mansion, usually somewhere in Pacific Heights in San Francisco... and this year, the Showcase was situated in the Classical Revival house that was built for legendary San Francisco resident Alfred Sutro and his wife Rose in 1908. The six bedroom, six and a half bath mansion just sold for $18 million and boasts amazing views of The Presidio below and to the San Francisco Bay beyond. Some standouts from the amazing collection of interior design talent follow.

The entry reception area by Jonathan Rachman featured a mind-boggling floor covering: a custom area rug composed of brick-sized pieces of hair-on-hide stitched together and dripped with melted gold paint. The otherwise neutral space had touches of gold almost everywhere. The inspiration for the space, says, Rachman, was Kate Moss and the Lorde song "Royals." I liked the whimsical white and gold ceramic anatomically correct heart sitting on some books on a console table! 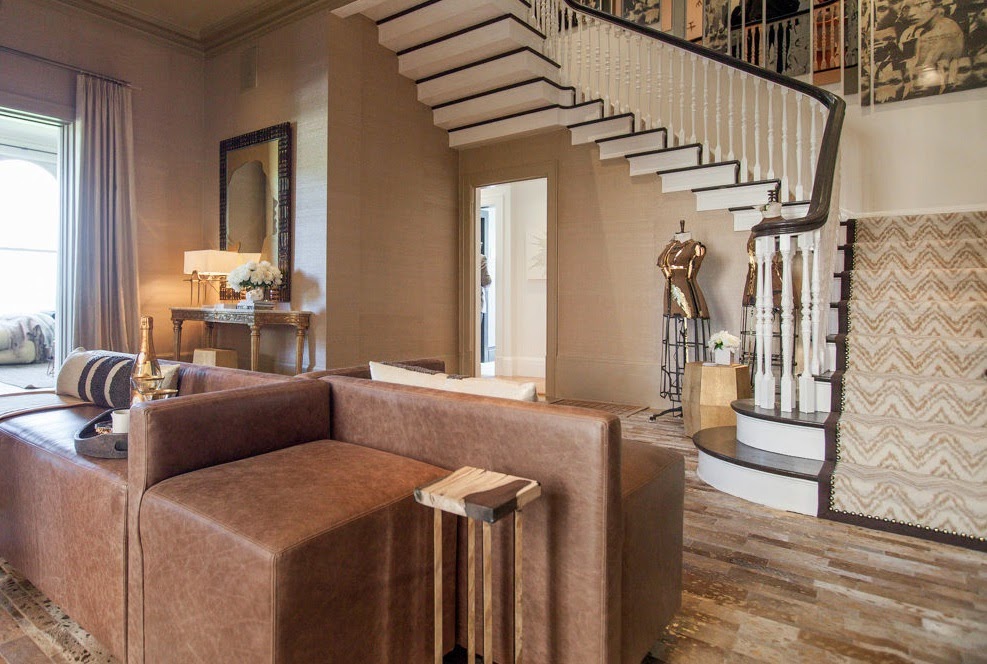 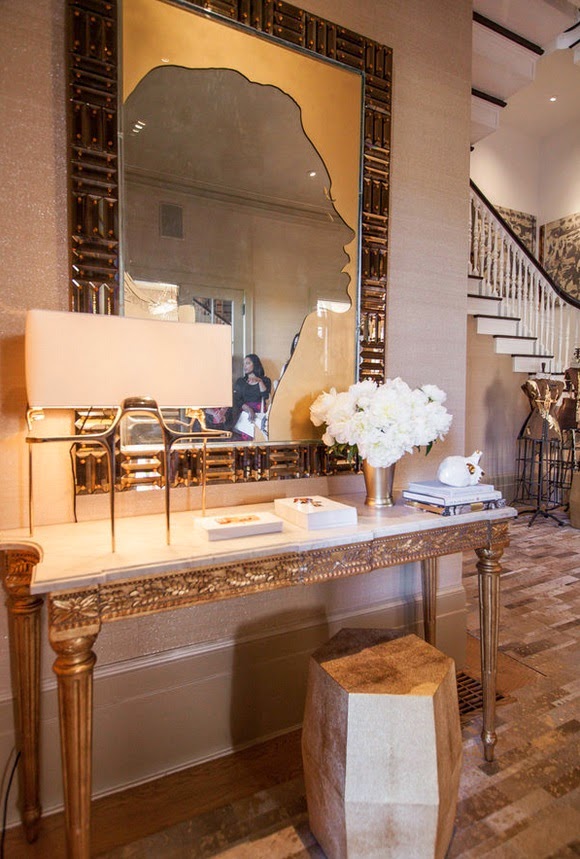 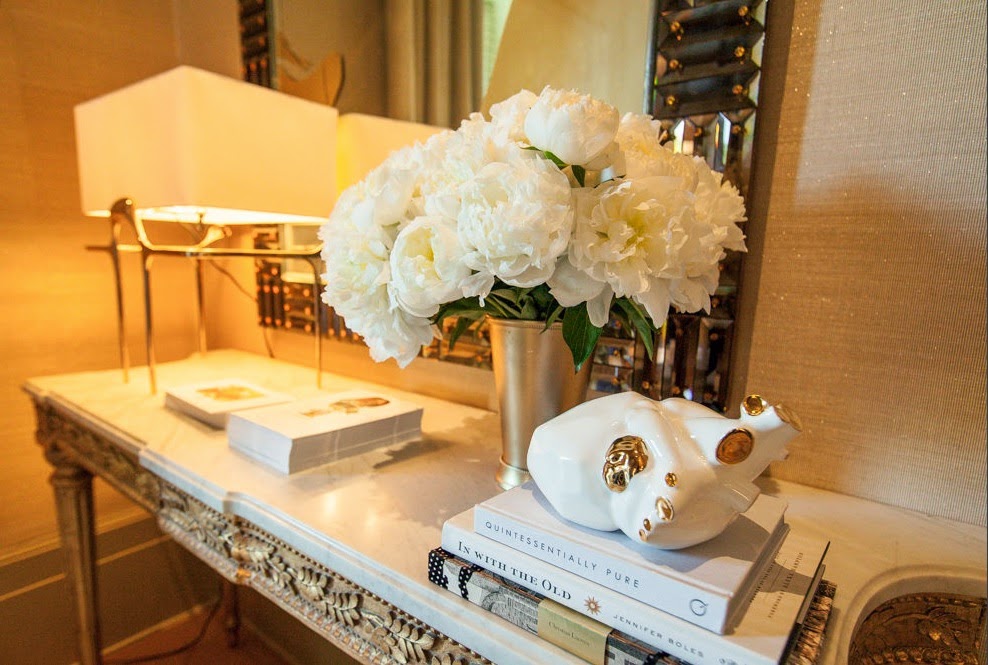 This living room by Heather Hilliard was deceptive... it looks plain in this photograph, but in person it was full of texture and light, looking out into the green backyard, the blue skies, and the blue of the Bay itself. Hilliard's design did not compete with the view but only served to enhance it. The walls were done in a delicious lime paint which is burnished to a glass-like finish, much like Venetian plaster. The color of the paint changed in layers, giving the stunning impression of geological strata. 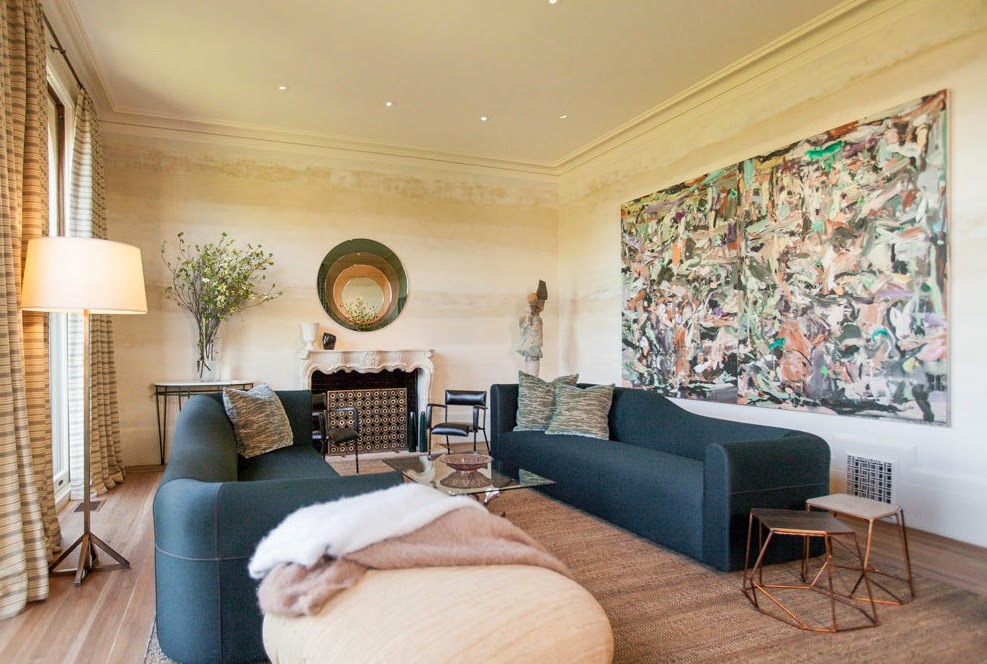 The Music Room by BAMO featured an incredible, modern chandelier (Le Pentagone by Jonathan Browning Inc.) anchored to a golden-bronze-y ceiling. I attended the Showcase this year with some clients and we all fell in love with the very simple but effective window treatments in this room: roman shades made of a very loosely woven linen banded with fabric tape of a Greek key design. I will be designing a version of these for said clients soon! 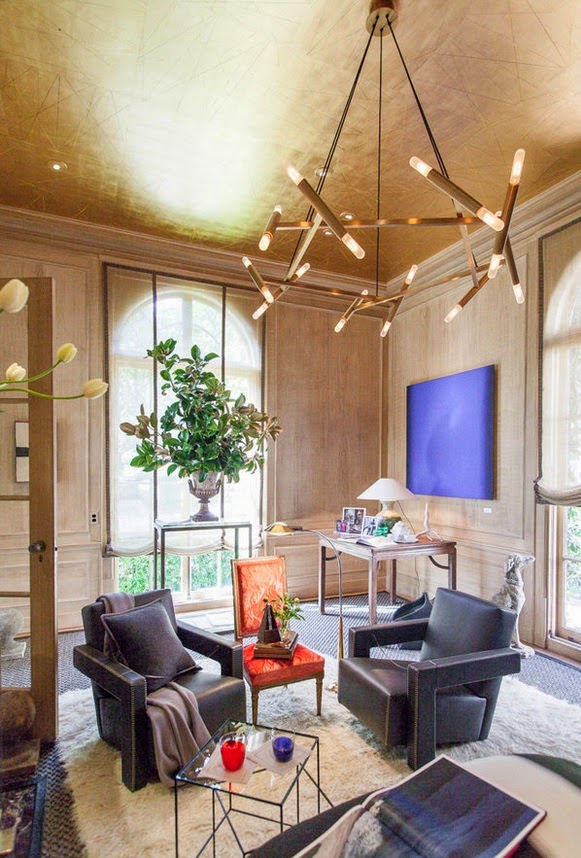 When SageraBrazil Design proposed their design for the dining room, they were instructed to retain the hand-painted wallpaper that is original to the house! Other designers may have seen this as an impediment to their design, but George Brazil and Cecilia Sagera-Hill embraced the garden-theme of the paper and created a delicately verdant dining room that feels like one is dining al fresco. 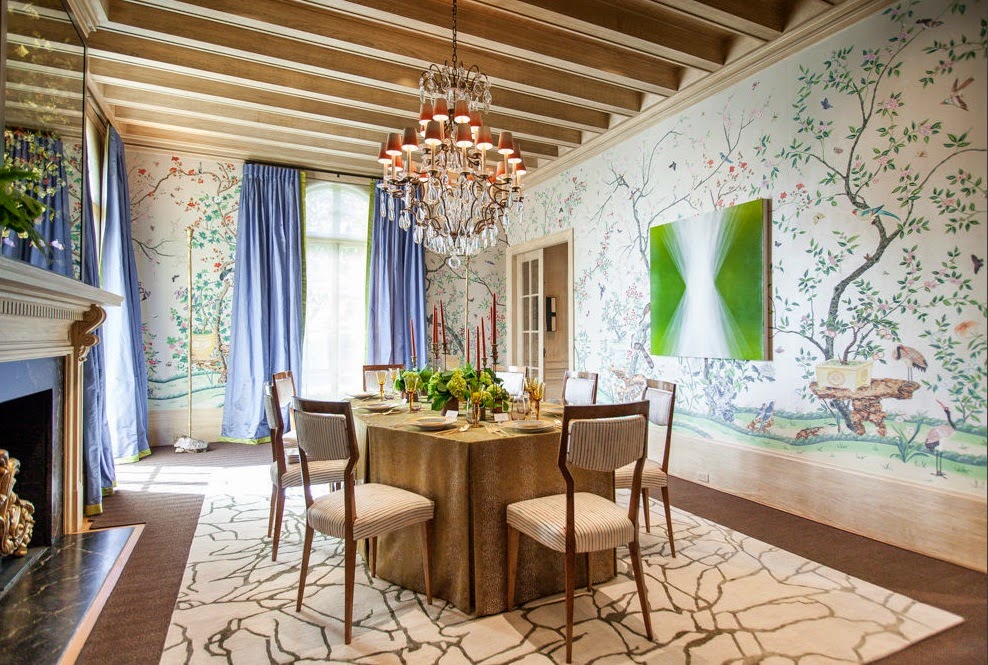 The wooden library which features an original carved coat of arms for the Sutro family was done by Geoffrey De Sousa in a neutral palette to let the wood and views of the Bay sing. The massive blown glass shade over the library table is the draw in this space. 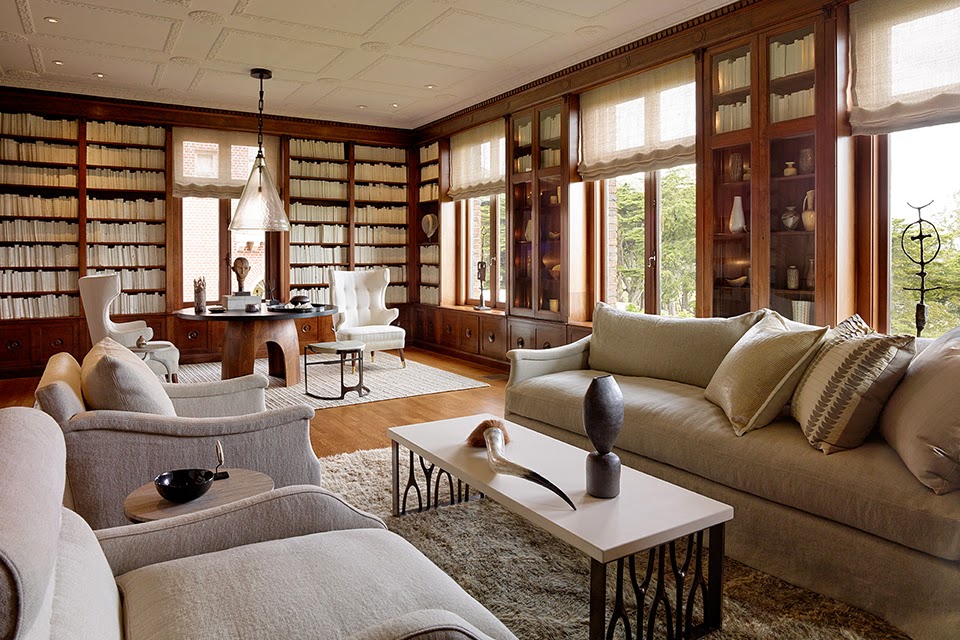 I love art hung salon-style and this Artist's Home Studio by Matthew MacCaul Turner used art to great advantage. Since the space was imagined to be used by an artist, the raw wood floor was splattered with paint, as a real studio would be, which became an art piece in itself. 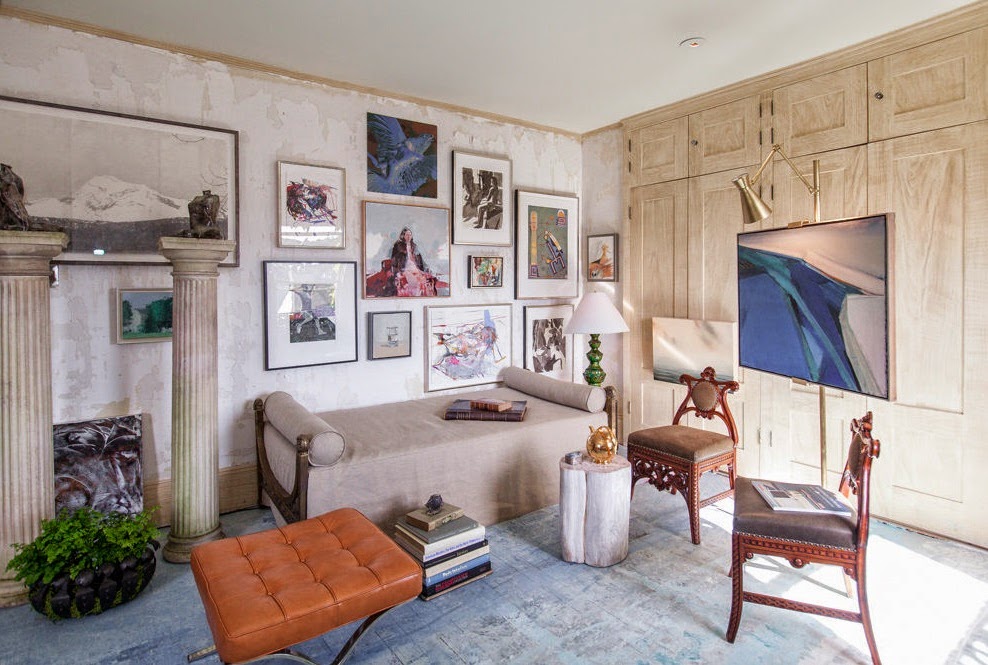 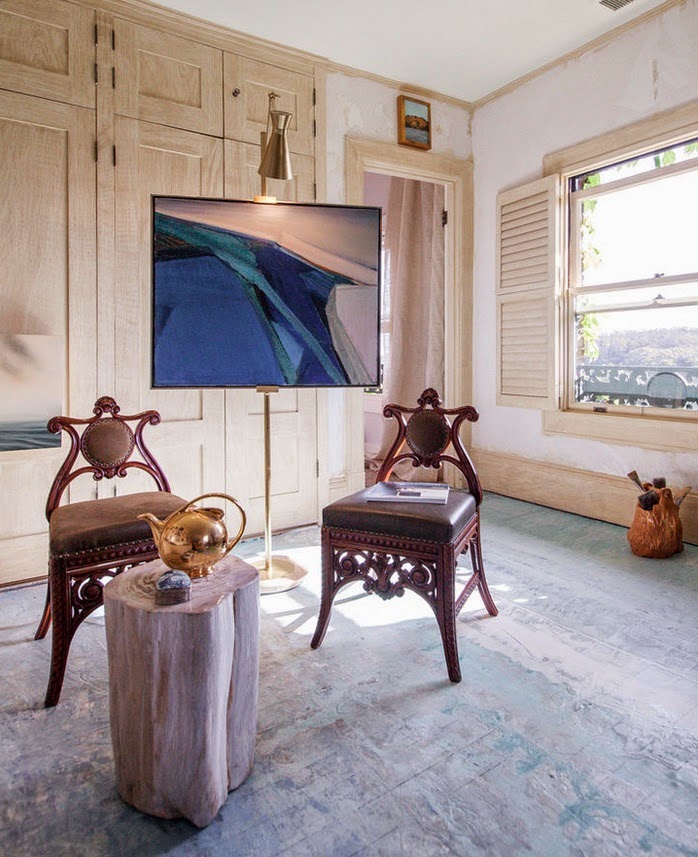 Lisa Bakamis created what she calls The Soaking Lounge, a bathroom sanctuary for a teenage girl. This space was full of disparate elements that puzzled me... I am not sure how a teenage girl would respond to the heavy, rustic reclaimed wood walls and live-edge wood counter, the gritty rope-hung industrial pendant lights, or the slate flooring. But interestingly, these things only served to make the colorful butterfly wallpaper and the pink tie-dyed curtains stand out even more. The space was uneven, but I include it here because when all is said and done, it is an intriguing mix... one that pleased me somehow. And I especially liked the leopard-print smoked mirror tiles from Ann Sacks. 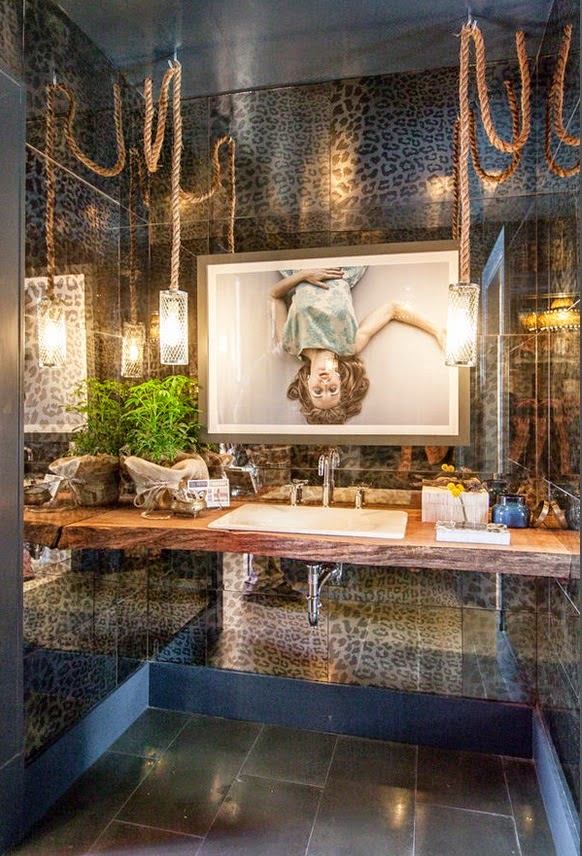 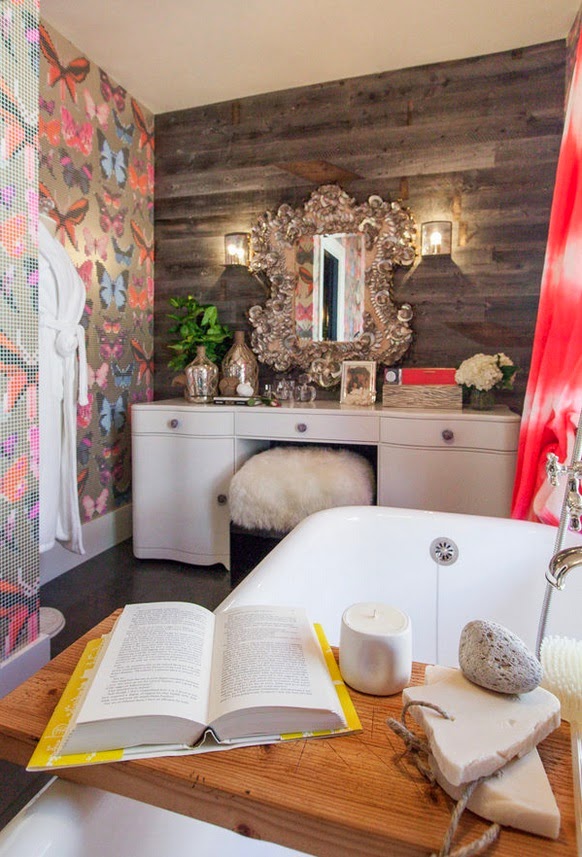 The Woman's Office, so named by Laura Larkin, featured an amazing product on the ceiling: a sort of quilted-rubbery wallpaper that looks like antique plaster work! 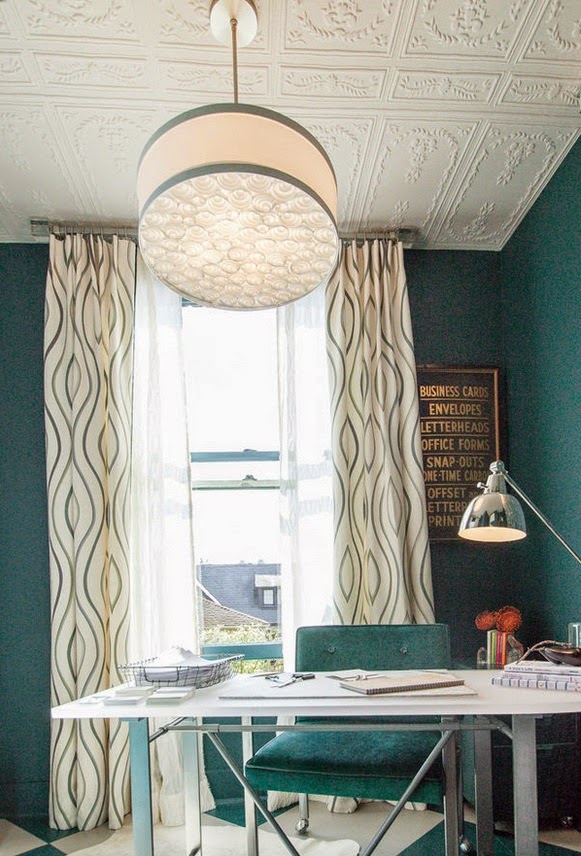 One has to be careful when creating a theme room for children: it can get out of control and end up looking like a nightmare version of Disneyland. But these next two children's rooms really hit the right notes. The first three images are from The Little Roamer's Room by Regan Baker. Just like the dining room with its hand-painted wallpaper, this room sported the original wallpaper based on a design by Diego Giacometti. Baker used the motif of animals as a springboard for an adorable room organized around the idea of camping in the wilderness and all the adventures that entails. The array of stuffed animals in this space was supremely cute... 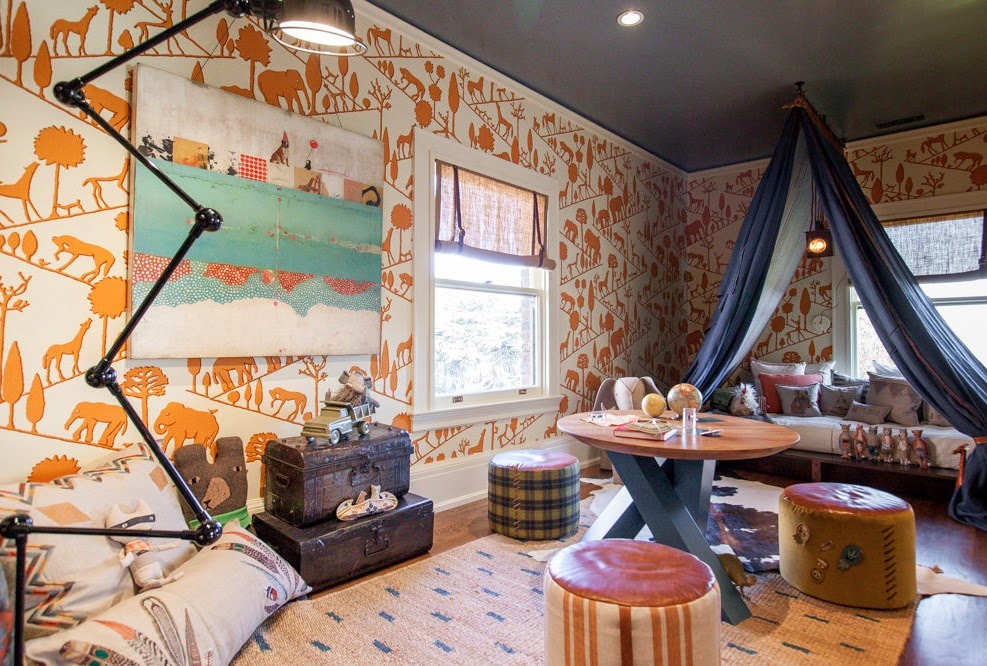 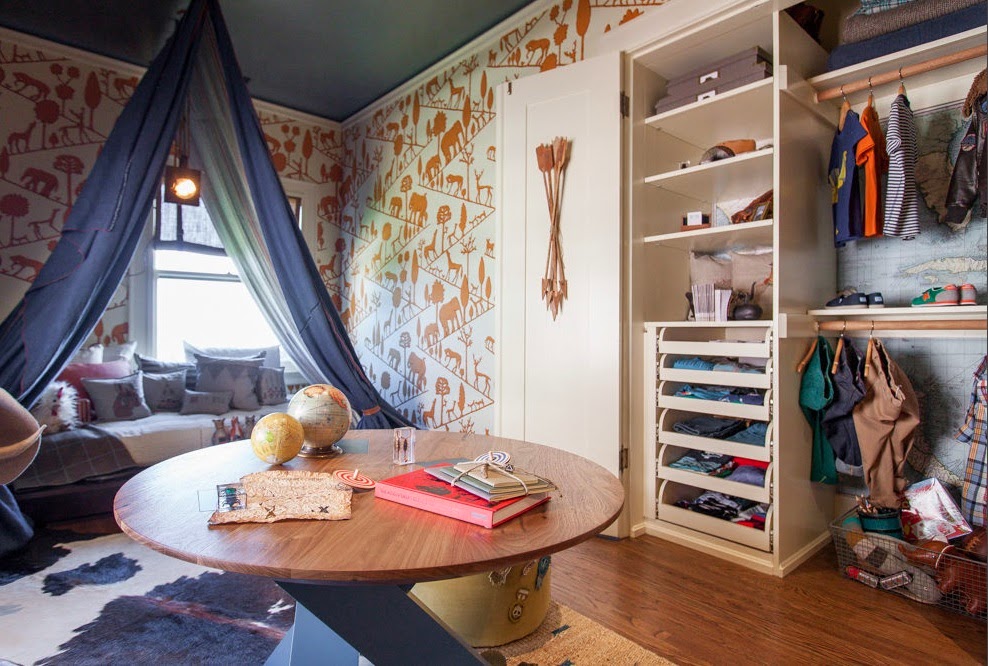 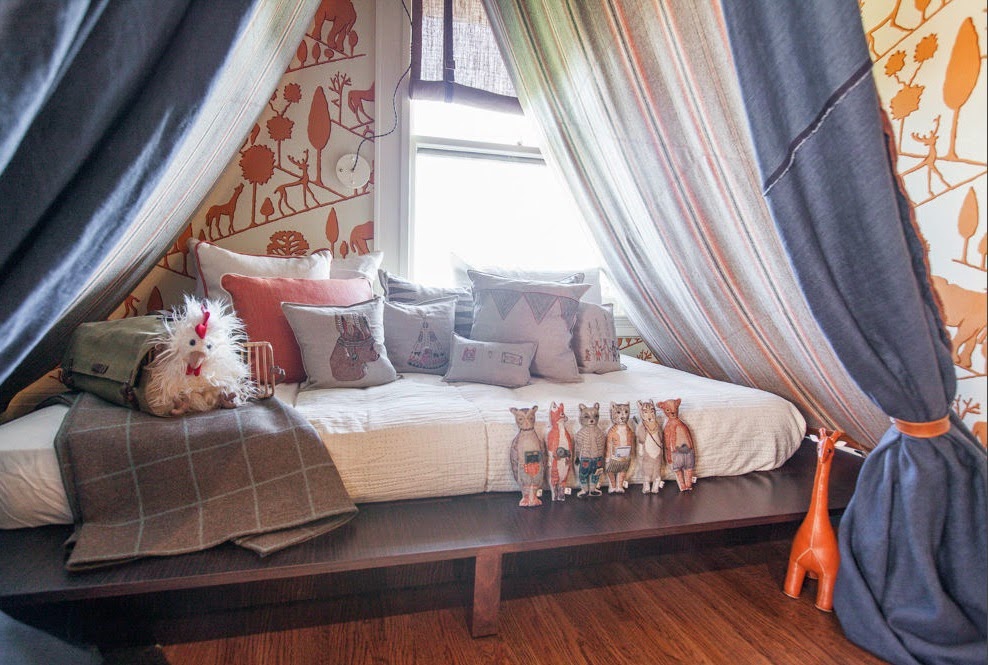 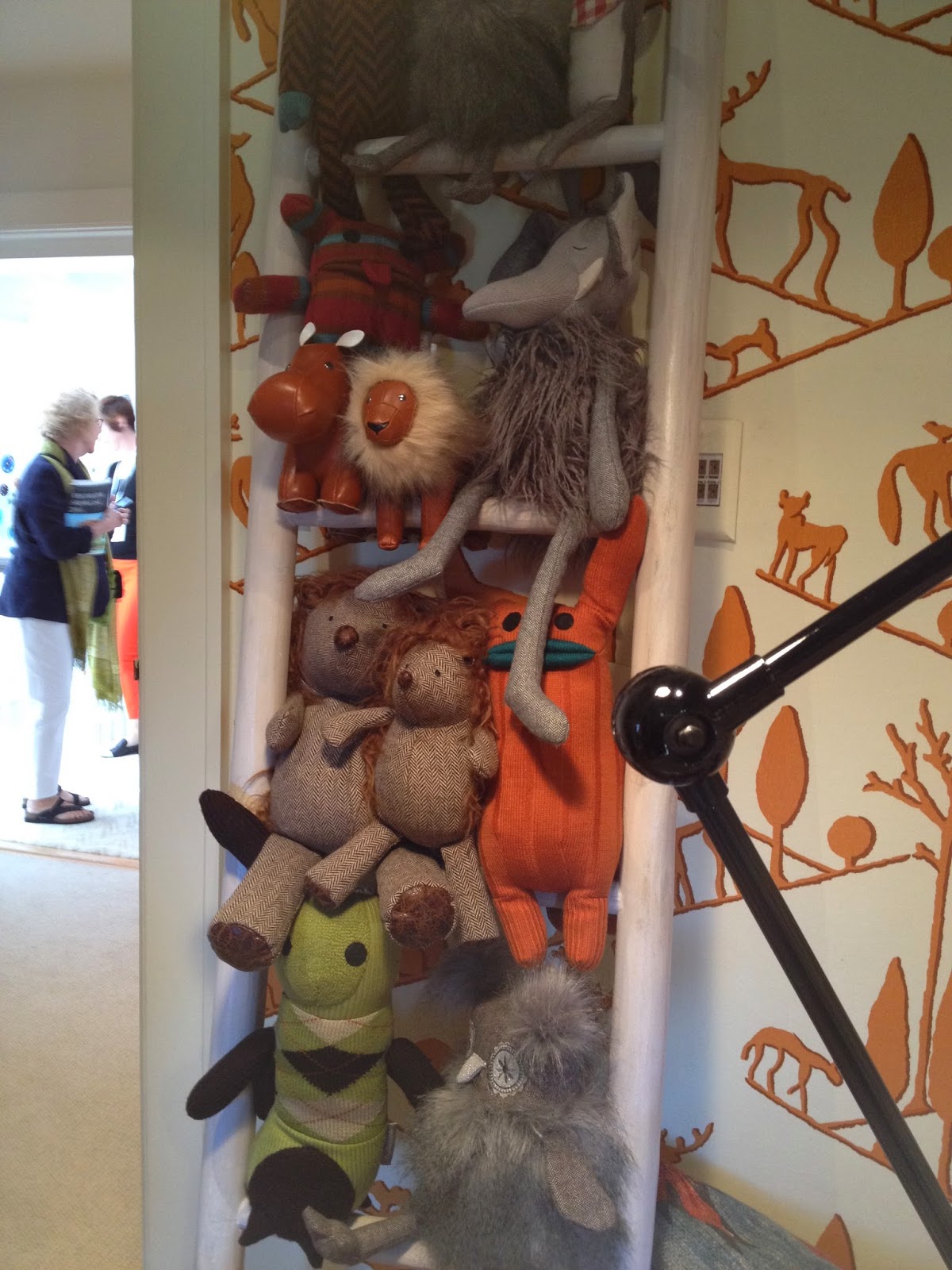 ...and the next child's room was called Little Boy Blu [sic] designed by Shelley Cahan and featured a chalkboard ceiling with hand-drawn blueprints of a fighter plane! 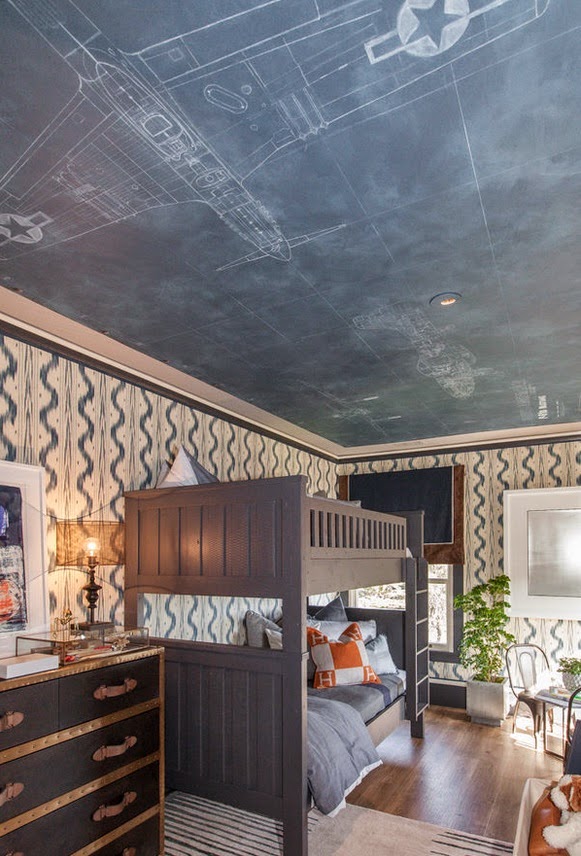 One of the last spaces that visitors walked through on the self-guided house tour was the kitchen designed by Steven Miller; the space has been named House Beautiful's Kitchen of the Year. It might not seem like a likely color choice for a kitchen, but this glossy, sleek, all-black space was quite stunning and sophisticated while still retaining a sense of a traditional kitchen thanks to a more conservative door profile. I have been hearing my industry talk about the continuing decline of stainless steel as a finish choice for appliances and this kitchen's black refrigerator, ovens, and dishwasher certainly made that case. Additional sparkle was brought in with mica-flecked wallpaper, and slate and hematite-colored back splash tiles laid in a herringbone pattern. But the most striking feature was the geometric recess in the ceiling that held an LED light feature lined with actual quartz crystals. The coordinating lounge area adjacent to the kitchen made a nice transition to the outdoors. 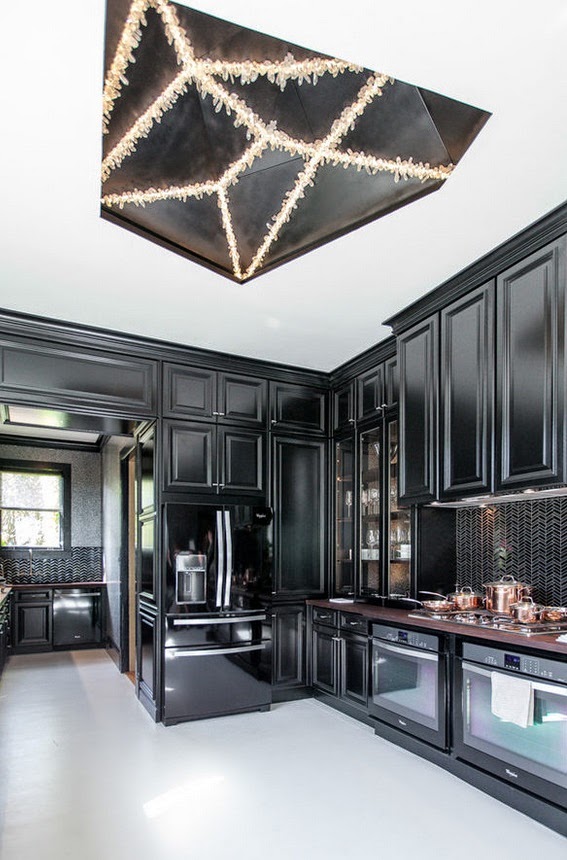 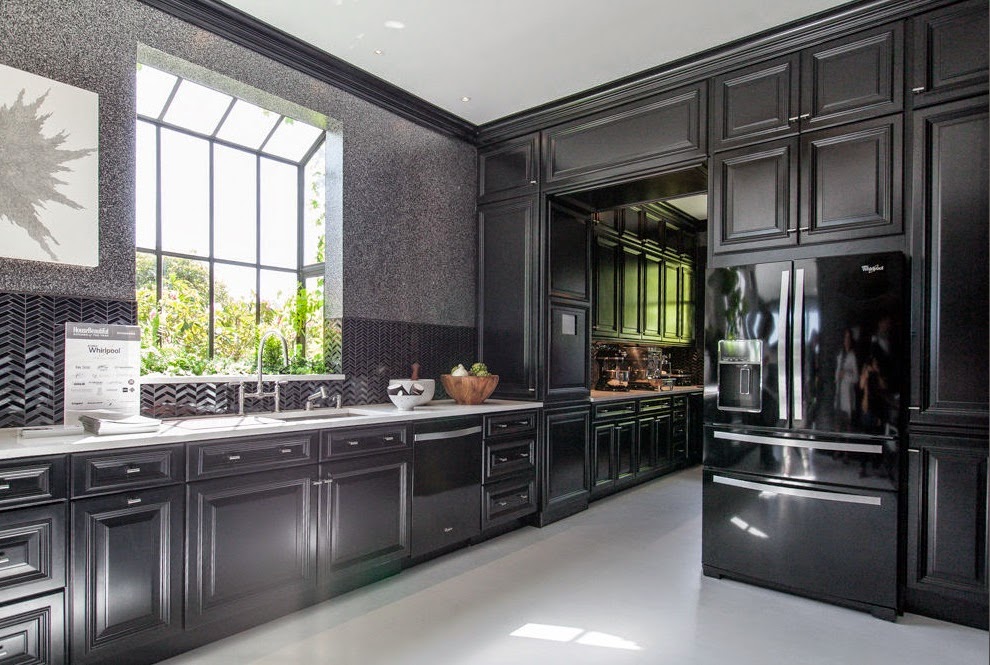 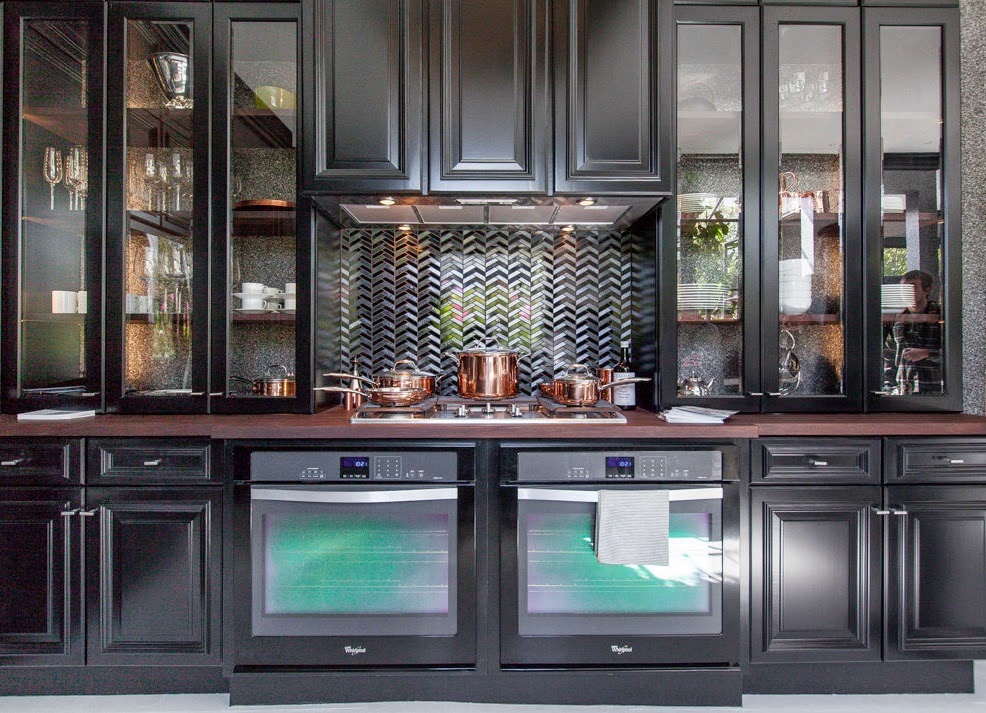 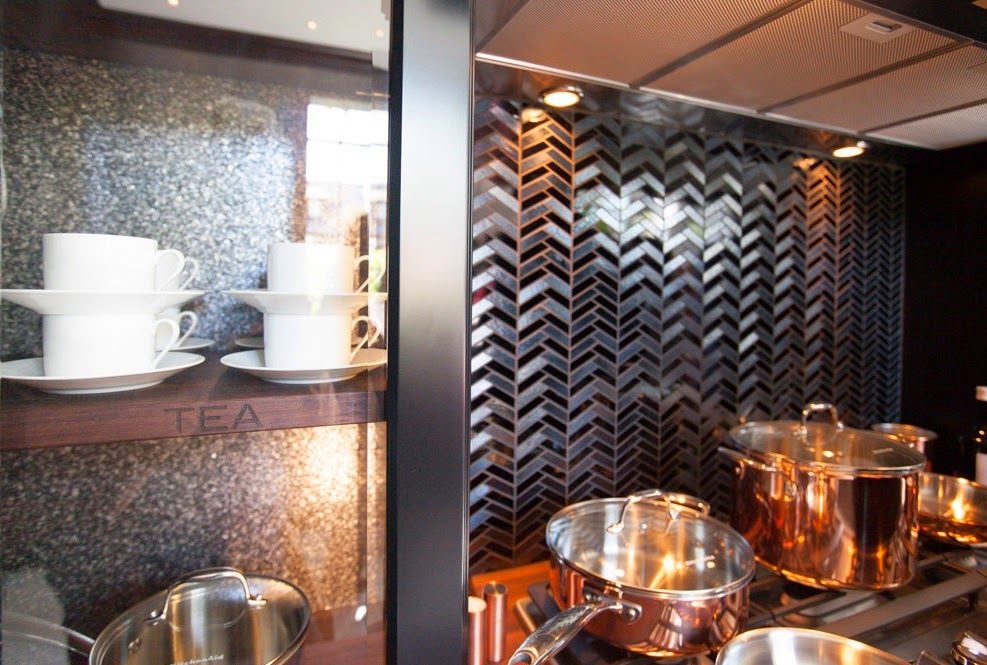 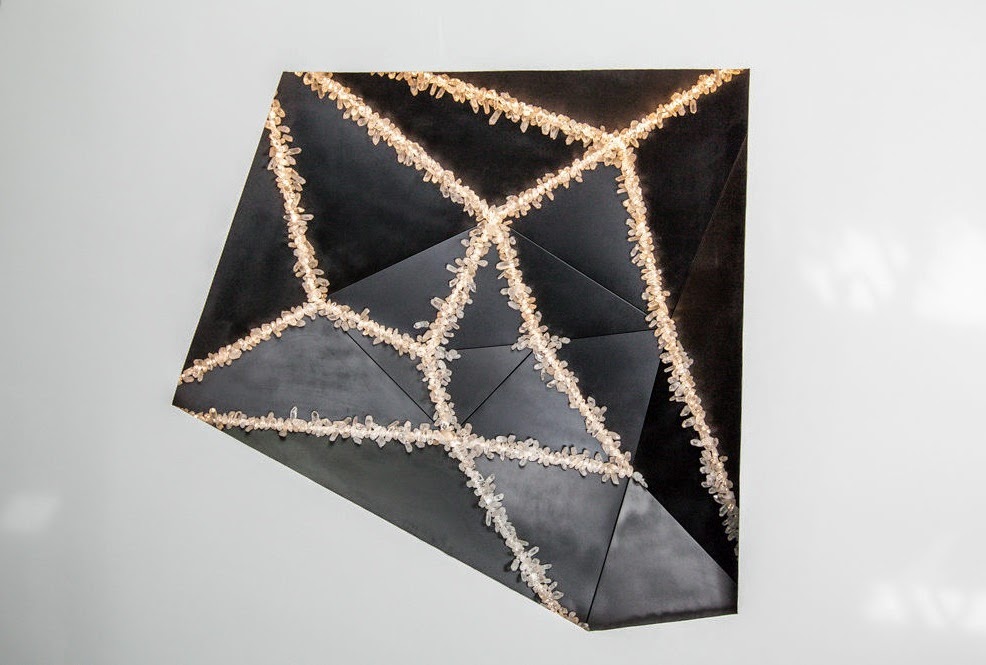 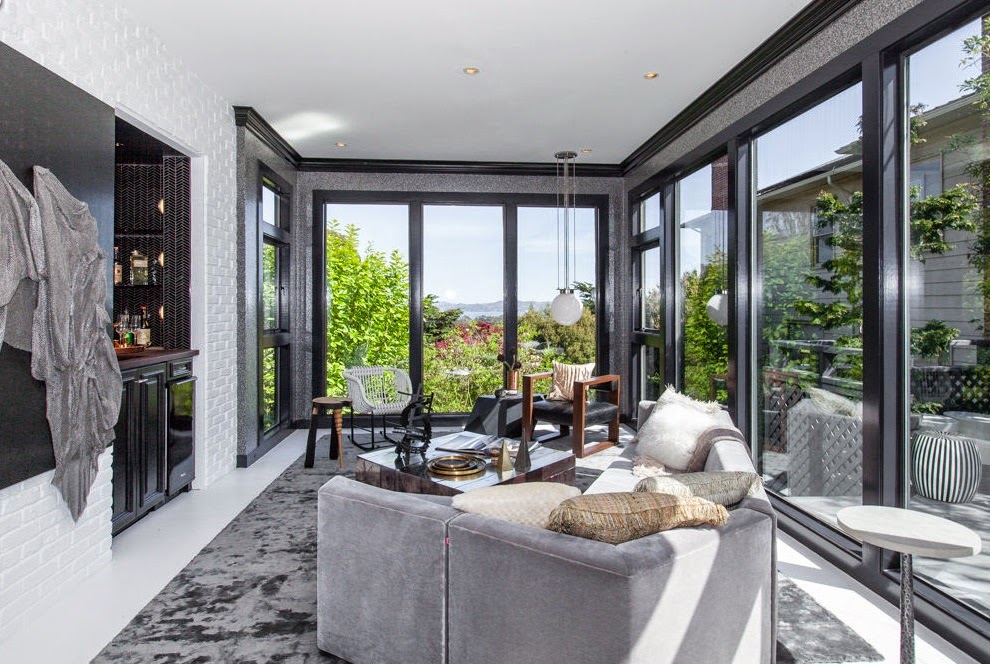 If you live in Northern California and missed this year's Showcase, be sure to visit next year. Geoffrey De Sousa mentioned to me that this and the Kip's Bay Showhouse in New York are the two most important interior design showhouses in the country!

http://decoratorshowcase.org/
Posted by Jeff Fiorito, Allied ASID at 8:00 AM