For this installment of the History of Furniture, we jump back just a few decades to the 1980s to examine the furniture/interior/art movement phenomenon known as Memphis.

The name might be deceiving: the movement has nothing to do with the southern city in the United States nor the ancient city in Egypt. Arising in 1981 from a group of designers in Milan, Italy led by architect Ettore Sottsass, the name of the group is derived, surprisingly enough, from a Bob Dylan song, "Stuck Inside of Mobile with the Memphis Blues Again." Tired of functionality only, Sottsass aimed to create a style that incorporated a sense of playfulness and sensuality.

Retail consultant Bertrand Pellegrin recently--and hilariously--described Memphis as a "shotgun wedding between Bauhaus and Fisher-Price." And he is not too far off. Take a look at the riot of color, mostly primary, and the big blocky shapes. 1980s design was certainly bold and nothing historically illustrates this more for us than Memphis. Angularity, asymmetry, geometric shapes, and thick overexagerated lines make up the Memphis look which is a mash-up of movements like Art Deco and Pop Art, including styles such as 1950s Kitsch (hence the stylized fake granite on laminate) and futuristic themes.

One of the most iconic designs from the movement--and perhaps the poster child for post modern Milanese design in general--is Ettore Sottsass' Carlton piece. A set of open shelving and a very small set of drawers is presented in a spiky silhouette that recalls cuneiform writing--it is at once a bookcase, a dresser, or a room divider and is often described as all three. 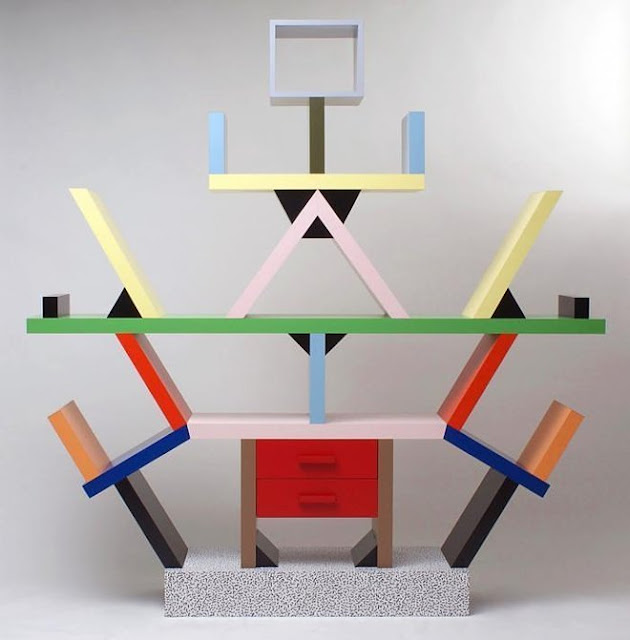 This graphic, thick-lined style also recalls another artist working at the time, Keith Haring (previously here). The fake 1950s granite laminate on Sotsass's Casablanca Sideboard even resembles a small Haring pattern, and the form recalls many of Haring's dancing figures. Indeed, many Memphis pieces would have benefited form being covered with Haring's signature black doodles. 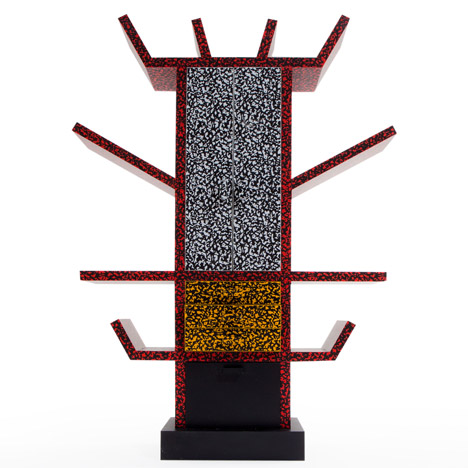 California sculptor, artist, and designer Peter Shire created the Bel Air chair for the Memphis movement which was featured prominently on the cover of the most widely distributed book on the group (authored by Barbara Radice). Notice how the back of the chair incongruously sports what appears to be a beach ball. 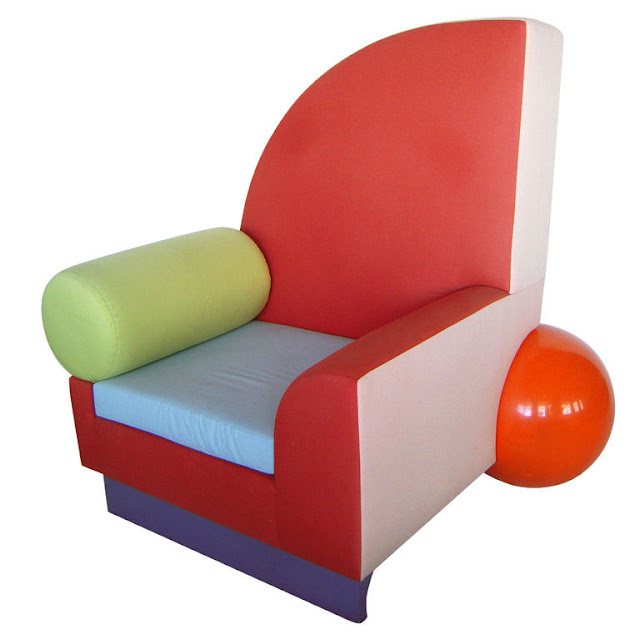 The First Chair created in 1983 by Michele de Lucchi is minimal by Memphis standards yet just as bold and graphic... 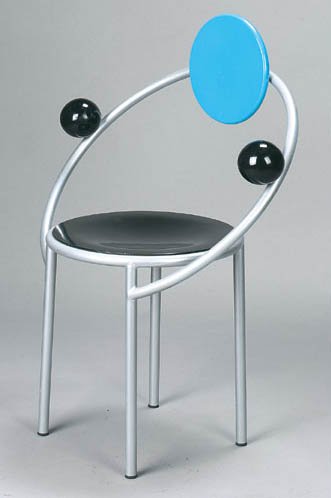 ...and would look great paired with de Lucchi's Flamingo Sidetable. 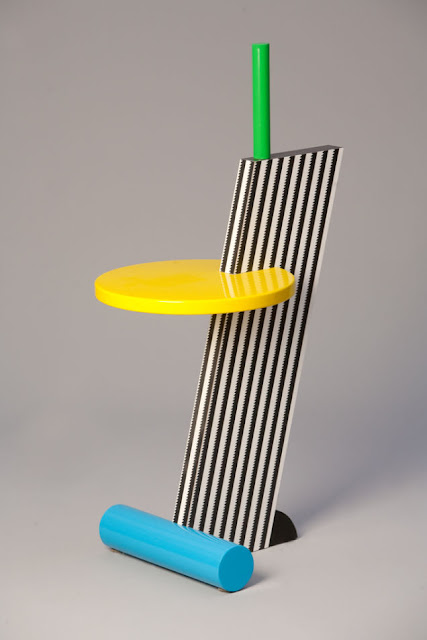 Marco Zanini's Dublin sofa harks back to furniture designs from the 1950s. 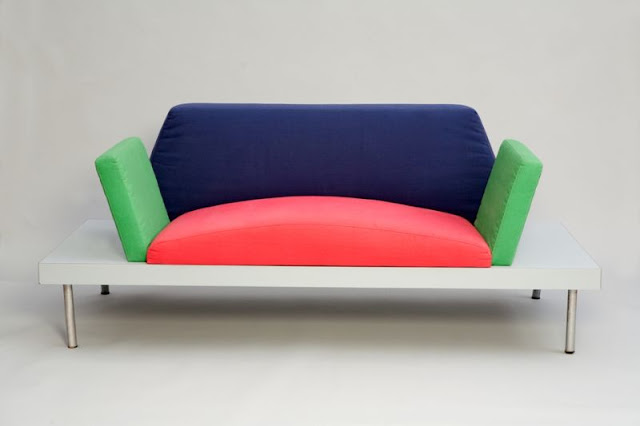 Japanese designer Masanori Umeda met Sotsass while the pair were working for Olivetti, and Sotsass invited him to particapte in the Memphis movement. Umeda came up with "Tawaraya," a boxing ring conversation pit. The second photo shows the original Memphis group piled in the middle of this creation in 1981! 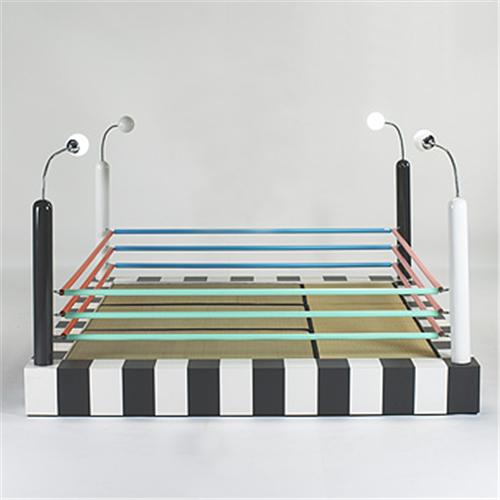 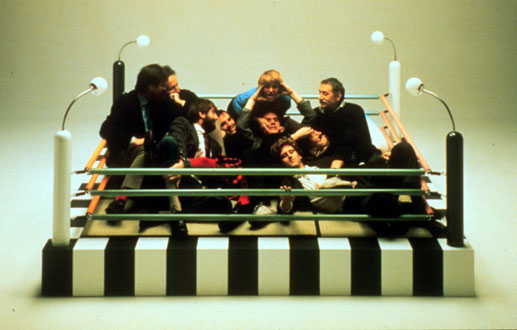 Certainly the most whimsical piece of Memphis furniture is the six-bulb Super Lamp by Martine Bedin which can be trailed along like a dog on a leash...your own little pet lamp! 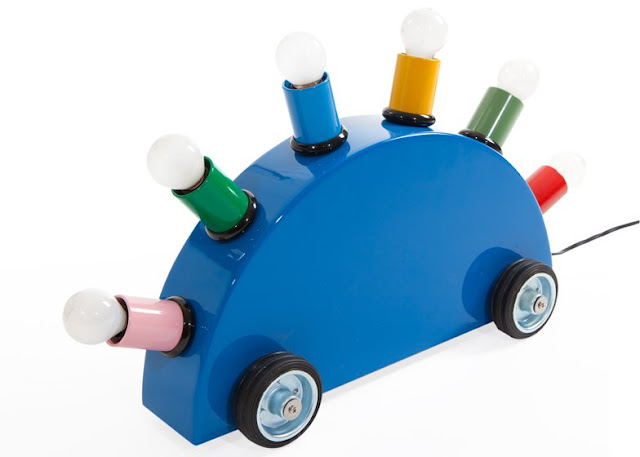